How could account-wide reputation work in WoW? 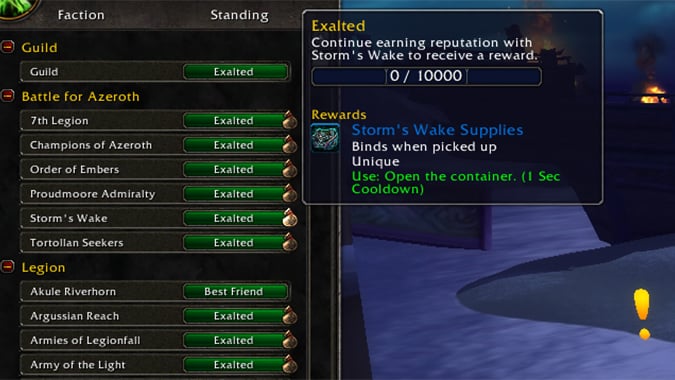 Reputation is a major mechanic in World of Warcraft, representing how various factions in the game feel about your character and their actions. It’s been around forever — well, since 2004 or so, anyway — and in all that time, reputation has always been directly tied to the character you’re playing. So if you’re on your Human Mage and you’re very well liked by the people of Ironforge, that affinity doesn’t translate to your Dwarf Hunter or your Night Elf Priest — much less your Horde characters who after all have a whole different slate of factions they can gain reputation with.

For years now, players have wanted account-wide reputation in order to circumvent the grind of getting all the various factions to Exalted, and then immediately having to do it again on their next alt. And truth be told, that repetitive grind can be extremely frustrating. We’ve seen reputation tokens introduced in previous expansions to make grinding it go faster, for example. In Battle for Azeroth you could make Contracts (or buy them on the AH) to gain reputation with specific factions while out and about doing World Quests and the like, speeding it up somewhat. You needed to be at least friendly with a faction to use them, but it was still better than nothing.

But would it be a good idea to let players simply use the same reputation scores — and thus have access to the same level of reputation with a faction — on all of their characters? Should reputation be account wide? And if so, how should it be implemented?

I’m known as a bit of a contrarian, but I will say that I think account-wide reputation could be implemented and work well, but it needs limitations. For starters, I don’t think Horde should be exalted with Alliance factions and vice versa — the factions should convert to the proper ones for the Horde/Alliance characters. So if you’re exalted with the 7th Legion, your Tauren Monk should be exalted with the Honorbound, not the 7th Legion, which is an Alliance faction. I also would not be entirely opposed to reputation only becoming account-bound when it reaches exalted — it will make players more likely to do the various quests and objectives to get a reputation to exalted if they know that’s how they unlock that faction for their entire account. 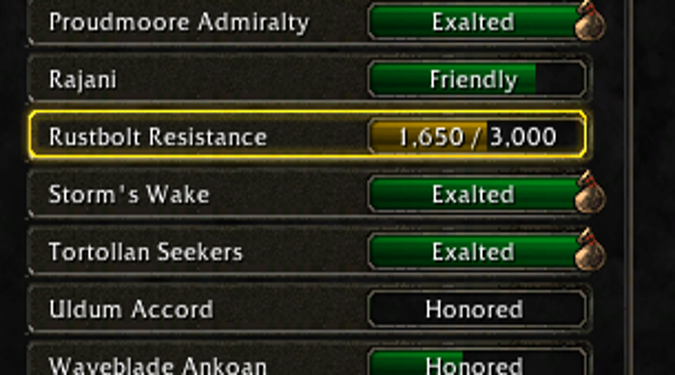 How many times should I have to make you like me?

I agree that it’s tiresome having to get all your alts to revered with The Anglers, for example, but getting one character to exalted with them and then never having to do that grind again would be worth it, in my opinion. It’s a little further than you might actually have to go to get what you’re after, but you’ll only have to do it once.

Another possibility would be that you put the account-wide unlock on the alt — make it so they have to get a reputation at least to friendly or honored before the reputation unlocks from their other characters. So if you have a character who has exalted with Steamwheedle, you’d have to at least do something for them on your alt to get the reputation up to the threshold before it unlocked fully. That way you don’t just blast one character to exalted with everybody and never really have to play your alts ever again.

Finally, I’d consider removing the Human rep bonus. Diplomacy is a flat 10% bonus, meaning that if you’re trying to get a character to max reputation as fast as possible Human will always be a winning choice. It means Horde players would almost be required to get a Human alt to unlock all reputations faster, especially when there are crafting recipes, mounts, and items locked behind a reputation gate. If reputation is going to be shared across every character on your account, making one race better at grinding it puts pressure on people to select that race.

There currently is no stated plan to make reputation account bound, but who knows — we once thought cross-faction play was a pipe dream, and now, here it is. Perhaps account bound reputation is the next hurdle.