What’s next for cross-faction gameplay in WoW? We have thoughts on future features 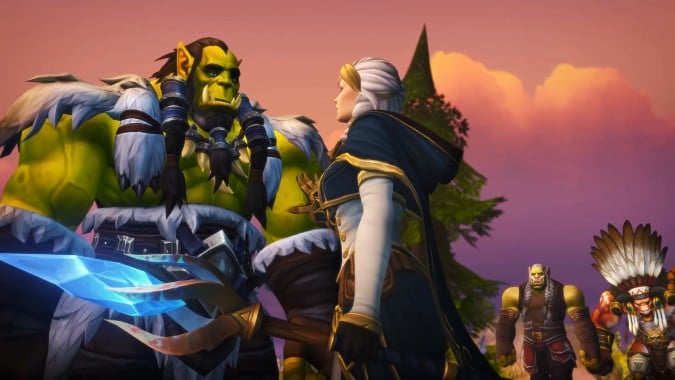 Cross-faction gameplay is coming to World of Warcraft — at least in a limited fashion that will allow players to run dungeons and raids. The developers have already said that, if and when it makes sense, this kind of gameplay could be expanded upon in the future. But how far do they intend to take us with cross-faction gameplay? That’s a question that, perhaps, not even the WoW developers themselves have an answer for yet.

In an interview for IGN, Game Director Ion Hazzikostas suggested that Blizzard will be carefully evaluating where the game goes from here, and how the community takes to this new feature will certainly have an impact on that. But even though Ion didn’t give any specifics, we can derive some hints as to what the team seems to be thinking about cross-faction play at the moment. So let’s take a look at what the future might hold for cross-faction play in WoW. 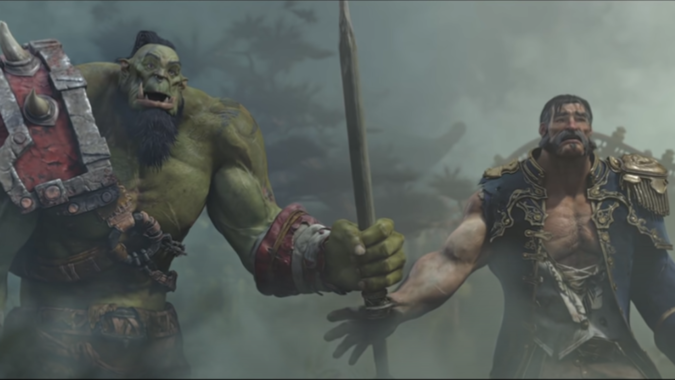 Ion made it clear that the Horde and Alliance situation in WoW isn’t comparable to a story like Star Wars, where each individual chooses their faction and likely have the same ideology and worldview. But that isn’t at all how the Horde and the Alliance operate.

Jedi and Sith and that universe are ideologies, they’re choices. Someone chooses to walk the path of the light or to go to the dark side… [in WoW] you’re born Alliance, you’re born Horde. That’s not a choice you make. That’s something that’s assigned to you and that predestined fate isn’t necessarily something that we want to necessarily stand by, the idea that your lot in the world because you were born an elf, you must hate trolls and nothing can change that. And because you were born a troll, you’re their eternal enemy.

And Warcraft has plenty of in-game examples of shifting allegiances: Dark Iron Dwarves have been enemies to the Alliance, but they’re now accepted within it. Void Elves defected from the Horde to join the Alliance; and the the Blood Elves that they defected from may be Horde today, but they were with the Alliance in Warcraft 3.

That doesn’t necessarily imply that one day you’ll be able to roll an Alliance Tauren or a Horde Night Elf. It just symbolizes that the Horde and the Alliance are ever-shifting coalitions, and no individual is bound to “hate” a certain race or nation or faction forever. Enemies change, and allies change as well.

But even if we accept that allegiances can change, that doesn’t mean they’re going to. It doesn’t makes sense for the Night Elves to suddenly forgive and forget the Horde, or for Forsaken and Worgen to welcome one another with open arms. But even in lore we’ve seen factions be flexible, rather than rigid racial divides. 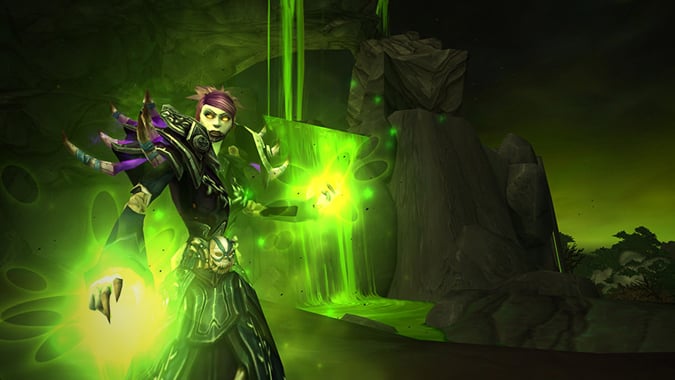 The faction conflict is still going to exist, but perhaps with more nuance

Getting cross-faction gameplay doesn’t mean we’ll suddenly be playing “World of Peacecraft.” Horde and Alliance may be at an armistice — and based on Ion’s words, it’s unlikely that we’ll see the faction war become the center of an expansion again — but there’s still  a lot of bad blood that isn’t going to simply disappear overnight.

[Hazzikostas] thinks it more likely they’ll focus on a wider range of perspectives on the divide through characters and quests, such as the survivors of the burning of Teldrassil, Genn Greymane, members of the Forsaken, and all those in between — all while letting players decide for themselves where they stand in relation to the opposing faction.

I feel like this is a very smart decision. Although reception to cross-faction play has been mostly positive, there are still die-hard faction war players out there. Not every member of the Alliance is thrilled to work together with the Horde, and vice-versa. And from a narrative standpoint, it simply doesn’t make sense for that animosity to be swept under a rug. Some wounds are still very recent, and will take a lot of time to heal… if they ever do.

With this, I hope that the lore continues to acknowledge that there is conflict between these factions, but without forcing the player to participate in it. Most PVP battlegrounds should still be based around points of contention between the two factions, and there should still be NPCs and even entire subfactions dedicated to keeping the faction war alive, perhaps as a mirror to cooperative factions like the Cenarion Circle. Hopefully, this will be done in a way where players are truly able to make a choice to pursue those warlike endeavors, or to completely ignore them and focus on the larger threat at hand, if they so decide. 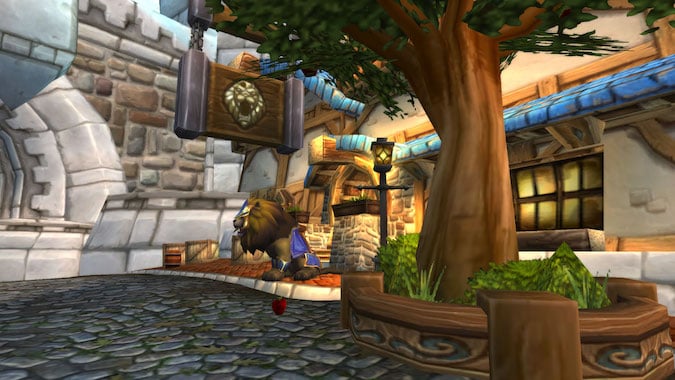 Which other cross-faction features makes sense for now?

The restrictions discussed above seem very well-defined, and it’s clear that the WoW team wants to take things slowly, so that they don’t make a decision that they end up regretting later — or, in what would be a truly nightmarish scenario, have to revert later. But certain features seem small or innocuous enough that I believe they could already be strongly considered.

Here are features I hope to see come to cross-faction gameplay quickly — or even with launch.

Account-wide features should be faction-agnostic

With this first step into cross-faction gameplay, I feel like we’re getting a glimpse at a more player-friendly experience moving forward. Quality of life is the name of the game. For instance, I firmly believe that account-wide features should become truly account-wide now: that is, you should be able to send gold and items among alts of either faction, rather than limiting it to specific Bind on Account items. I can’t think of a good reason why my personal roster of characters shouldn’t be able to share resources among themselves.

Faction-specific tagging should no longer exist

Similarly, when you’re out in the world questing, you shouldn’t have to compete for resources with your fellow players. It would be truly wonderful if things like faction-specific tags on mobs became a thing of the past.

If I’m playing my Horde character and an Alliance player feels like helping me take down a powerful mob, that kind of emergent gameplay should be encouraged — considering that, in this scenario, both players are willing to cooperate. If they truly don’t want to cooperate — if you want to go out in the world while declaring yourself completely hostile to the enemy faction — things like War Mode still exist, after all.

Cross-faction guilds should be carefully considered

Cross-faction guilds are another big topic of discussion right now, and one that I feel like the WoW team should carefully consider. They would truly allow people to play with their friends — though perhaps still with the planned restrictions of “instanced content only.”

These days, communities are often formed externally to the game anyway. If you find a nice group of players and want to play with them, shouldn’t you be allowed to do that regardless of your racial choice? Isn’t it too restrictive that you can’t play with your newly-found community because you decided to roll a Tauren instead of a Draenei? While Communities allow this kind of cross-faction communication, Guilds make it easier to organize, communicate, chat, and play together.

Some other possible ramifications of cross-faction gameplay are far more complicated than the ones listed above, and will require more deliberation — and technical effort, if the team ever decides that it makes sense to have them. Here are features I’d like to see in the next big update to cross-faction gaming.

Cross-faction LFG, and LFR could be future steps

Moving forward, I think that cross-faction grouping should be expanded to automatic group finder tools like LFG and LFR as well. If the developers want to conserve a sense of faction unity, perhaps these automatic tools could still try to form groups with players from the same faction at first, and only expand the search to the opposite faction later.

Cross-faction communication already exists, and should perhaps be facilitated

The game offers a few ways for opposite faction players to communicate, but not many. Elixir of Tongues allows every player to talk to the opposite faction. Some races also share a language that spans the faction divide: Pandaren can all speak to one another, as can Blood Elves and Void Elves. And, in a far more limited fashion, Demon Hunters of either faction can communicate in Demonic during Metamorphosis.

But perhaps the language barriers should be further reconsidered. Maybe the “Common” language could be extended to both factions. Or, if Blizzard wants to maintain a bit of a barrier, perhaps this kind of free communication could be allowed in Sanctuary zones (like Dalaran and Oribos), but not anywhere else.

Finally, I feel like players should have the ability to form a cross-faction groups — perhaps limited to people on their friends list — even outside of instances. This would be an enormous technical undertaking for sure, but would knock out the final big barrier that keeps friends from gaming together.

But the game has faction-specific quests and interactions with NPCs, and I’m sure it would be a colossal task to make this work seamlessly. Perhaps all members could be recognized as the same faction as the group leader, perhaps it would be limited to neutral quests. Still, I firmly believe that it’s a step that should be taken at some point in the future — even if it’s a few expansions from now.

Races should most likely remain tied to their original factions

I don’t think it’s time for WoW to allow us to defect from our faction, or to let any race join any faction — and that probably won’t change any time soon.

Based on the sentiment described by Ion in the interview, I feel like the general sense of Horde and Alliance identity is something that the WoW devs want to preserve as much as possible, and a big part of that identity pertains to which races compose each faction. Things like Alliance Orcs and Horde Night Elves would muddle the waters too much at this point, and risk completely negating that identity.