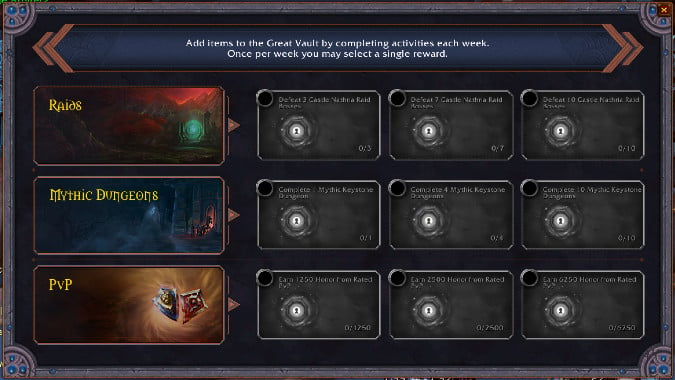 About a year and a half ago, I wrote a post about the Great Vault and how it doesn’t work as bad luck protection. Since then, they’ve made improvements to the Great Vault. They’ve lowered Raid requirements and how many Mythic+ clears you needed, for example. And now they’re making another improvement as of this week’s scheduled maintenance — changing the ‘consolation prizes’ that the Great Vault rewards when you don’t get gear (or don’t get gear that’s an upgrade) in an attempt to make the Vault feel less like you’re playing a game show and you always choose the wrong door.

Now, don’t get me wrong — these changes are definitely an improvement. I think it’s great that they’ve made it so you get the final tier of Great Vault rewards for 8 Mythic+ dungeon clears, and I think it’s great that they made it so you get gear on 2, 5, and 8 raid bosses instead of 3, 6, and 9. Those are good changes. And I think these changes, posted by CM Kaivax, are also good changes. I have no problem with them. I’m just doubtful they’ll do what Blizzard says they want them to do.

With scheduled weekly maintenance in each region, we intend to make the following changes to certain rewards provided by the Great Vault.

Combined with the power of the Creation Catalyst coming in future weeks, we hope that these changes will ensure that every week’s Great Vault feels like it’s helping you make progress toward your goals.

I like the Certified Vouchsafe a lot, because it will make boosting an alt through Covenant levels a lot easier and can even help you if you’re a returning player trying to get their character up fast. Twelve Attendant’s Tokens will pop you up twelve Renown — that’s not nothing. The Enlightened rep, and the Genesis Motes/Cyphers of the First Ones are both helpful in Zereth Mortis and will presumably get even more so as time passes.

However, the stated goal of making players happier with opening the Great Vault and getting gear that’s not an upgrade because it’s either gear you already have or it’s worse than what you have on isn’t something I expect to change much. Don’t get me wrong — these changes are better. This is an improved Great Vault we’re looking at. But I think disappointment with seeing no upgrades is always going to be a problem with a system that doesn’t allow any sort of targeting or otherwise excluding gear. Imagine if the Great Vault had a box you could check and say Don’t give me this item, I already have it — players would at least never have to see the same cloak or pants drop week in, week out. That sort of experience is just always going to be a bummer.

But regardless, here we are — are these improvements to the Great Vault good? Yes. Making the consolation prize more useful is good, as is making it so you can get stuff with fewer bosses or dungeon clears also is good. I just think there could be more done to improve the experience.