Day 11.5 of the Race to World First: Liquid defeats Anduin, Echo defeats the Lords of Dread 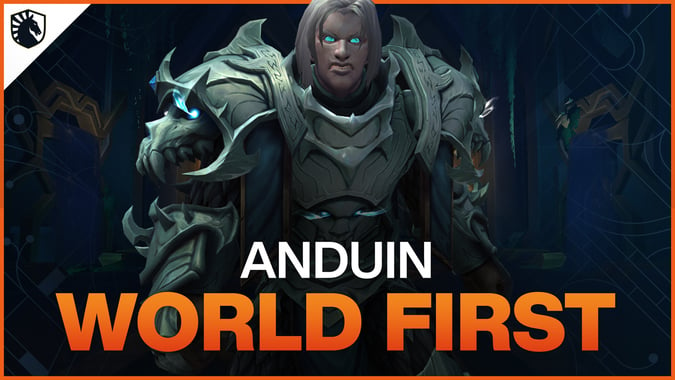 With the fearsome crab Halondrus fallen, Anduin was the next boss to stand in the way of Team Liquid and the rest of the World First racers. He put up a good fight, but after 216 pulls Anduin was finally defeated (saved?). Team Liquid was the first guild in the world to pull that off — congratulations to them!


Liquid had been making steady progress on Anduin for the last couple of days. For the first 187 pulls they were stuck above the 50% mark in the fight. The 188th pull was their first time dropping Anduin down to 31% and from there they quickly brought him down the rest of the way. Their first kill wasn’t exactly what someone would call a clean kill though. For the last couple minutes of the fight, it was just the tanks alive. Scottdk the Blood Death Knight and TwistedM the Brewmaster Monk managed to hold on long enough to deal the final damage and secure Liquid’s victory!

Of course, since we’re in the second week of the raid Liquid has had the chance to do another batch of raid splits. They also recleared all of the Mythic bosses again to reach Anduin. Including a second Halondrus the Reclaimer kill that only took them four attempts! They must truly have the best recipe for crab cakes now.

Echo wasn’t too far behind them though: Five hours after Liquid got world first, Echo got world second with only 152 pulls. SK Pieces picked up world third the following day in 180 pulls.

This lower number of attempts may be due to a mechanic in the fight that appears to be bugged. Blizzard developers had applied some hotfixes to the Anduin encounter earlier in the day, nerfing his overall health and changing the size of the Empowered Wicked Stars in the final phase to more closely match their visual. It turns out that the stars in the final phase don’t seem to actually hit anyone at all now. So players weren’t taking the extra damage or silence that would make the final Anduin burn the challenge it was supposed to be.

Since multiple guilds have unknowingly benefitted from this bug it places the developers in a bit of a pickle. It’s unclear what will happen with the encounter going forward, but I hope that they leave the fight in its bugged state for the rest of this week’s attempts to allow any other guilds who are working on him the same opportunity for a victory like Liquid and Echo had. While fixing the issue for the next reset to restore the fight to its intended difficulty.

Watch the clip (@NarcoliesTV POV of course 😎👏) with the side by side of the room reaction the moment Lords of Dread went DOWN! 🔥 pic.twitter.com/0HAip86C9E

With Anduin defeated, Liquid and Echo have a choice between fighting Rygelon or the Lords of Dread. Liquid has put 37 pulls into the Lords of Dread and got them to 13.36% — but the team thinks that’s as close as they can get right now since it keeps running into the enrage timer on the fight. On Heroic, these bosses have a 10 minute enrage, but on Mythic it’s a tighter 9 minute enrage, meaning the DPS and healing requirements are much higher. Liquid thought that they simply didn’t have the damage to beat them as the fight stood.

Echo had higher hopes for this boss. After 39 pulls on the Lords of Dread, the guild managed to get them down to 6.4% — and right now Echo seems to think the boss is killable. Will Echo find some trick that Liquid didn’t consider and be the first guild to put an end to these Dreadlords?

After 62 pulls Echo put the dread into “dreadfully close victory” and managed to beat the Lords of Dread. There was only a handful of players left alive, and they were almost a minute into the enrage timer but they managed to hold on long enough to finish them off. The secret to their success — Survival Hunters. Echo brought five of them to the fight and ran a basically all melee damage comp to bring the bosses down.

Liquid followed suit and three and a half hours later their own victory. They went back to fighting the Dread Lords after seeing how close Echo was getting. SK Pieces is still working on getting through the Dread Lords and is sitting at a best pull of the only other guild in the world to have defeated Anduin right now at time of writing.

Both guilds are now focused on Rygelon, and after 35 pulls on him Echo has reached 61%. Team Liquid isn’t far behind with 29 pulls and a best attempt of 69%. All of the three last fights in Sepulcher of the First Ones weren’t tested on the PTR at all, so this is the first time these guilds are experiencing them on Mythic difficulty.

Even if these guilds do manage to get through Ryegelon, it’s unlikely that we’ll see the Jailer fall this week. Could we have a three-week race? It’s been a long time since a raid has managed to put up this much of a fight! The last time a World First race lasted this long was was Kil’Jaeden Mythic in Tomb of Sargeras. He lived for 19 days after the raid opened and took a mind-boggling 654 pulls before Method banished him for good.

We’ll have more information for you on the Race to World First as these last bosses fall — keep watching the ratings for the latest!