There are several vacant thrones in the World of Warcraft — which one will be claimed by a “golden one,” as Il’gynoth whispered?

The first time we encountered Il’gynoth was in the Emerald Nightmare raid, it had some interesting prophetic whispers for players — whispers that were immediately dissected for clues about future plans for the game. This isn’t the first time we’ve had whispers in the game, but unlike the Puzzle Box of Yogg-Saron the references seemed more specific to the World of Warcraft rather than the generic lines you’d find in any Cthulhu-inspired story.

While the first batch of whispers may not have been designed for specific scenarios when they were originally written — “the king of diamonds has been made a pawn” didn’t quite fit the situation in the Eternal Palace raid when quoted by Azshara — the next batch that came from the Il’gynoth, Corruption Reborn fight in Ny’alotha seemed a lot more deliberate. Containing references to Mueh’zala and the Nathrezim plot discovered in Shadowlands, the whispers from this fight have already started coming true. However, there’s one whisper that hasn’t yet come to pass, and it receives a lot of attention when discussing the future of WoW:

The golden one claims a vacant throne. The crown of light will bring only darkness.

What’s tricky about this one is that there are actually a good number of vacant thrones right now, and an inordinate number of NPCs for whom the “golden one” epithet could apply. So which one could it be?

The following contains minor spoilers for the events of patch 9.2. 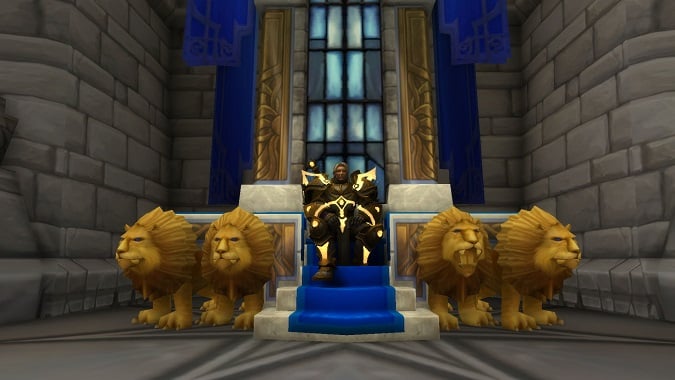 Regent and queen? Turalyon, Alleria and the throne of Stormwind

Anduin is taking a break from leadership after the events of Shadowlands while he recovers from his domination at the hands of the Jailer. In his place Turalyon continues to rule Stormwind as regent until the king returns.

But what if Anduin doesn’t return? Or, when he does, Turalyon refuses to give up his place on the throne?

While this has been a very popular interpretation ever since we first saw Turalyon named as regent after Anduin was kidnapped by the Mawsworn, it also feels unlikely to me. Turalyon has never struck me as a one who would do something like this, and even if he became subjected to the same whispers that plague Alleria it seems more likely that she would do the claiming — while the events in the Horrific Vision of Stormwind aren’t necessarily about claiming any thrones, we do see what a void-corrupted Alleria could do if compelled. However, like with Turalyon, I don’t see this happening, as the whole point of her character at this juncture is to show that the powers of the void can be used without corruption.

Two thrones await in Lordaeron for Calia Menethil, while Azshara seeks the true throne of power

Calia Menethil, golden because she is Forsaken raised by the Light, has also been a popular choice for this prophecy, although the game has yet to give any indication that she possesses the desire to rule anything. That said, in the ruins of Lordaeron there are two thrones that she could reasonably claim: the kingdom of Lordaeron is hers by birthright as she is the direct descendant of the royal line, and the Undercity is vacant a leader ever since Sylvanas fled after the events of patch 8.2.5. While Lillian Voss represents the Forsaken on the current Horde Council, she does not seem like she wants to keep the job. It can be imagined then that Calia ends the debate on whom Lordaeron belongs to — Human or Undead — by taking on the roles for both.

Of the people we’ve discussed so far, none of them have given any indication that they seek a throne. That is not the case for Azshara, who told us point blank after the Dark Inquisitor Xanesh fight in Ny’alotha that she intends to claim the “true throne of power.” While we’re not sure what that actually is — although I have some ideas about it — the language she uses points directly to the wording of the prophetic whisper. Even the “golden one” moniker could apply to her, with her well-known golden eyes that, like Illidan, destined her for greatness.

That said, Azshara is also the least interesting possibility. It would simply be a case of evil NPCs doing evil things, something not really worth whispering about. So while this may be the true answer, I really hope it’s not. 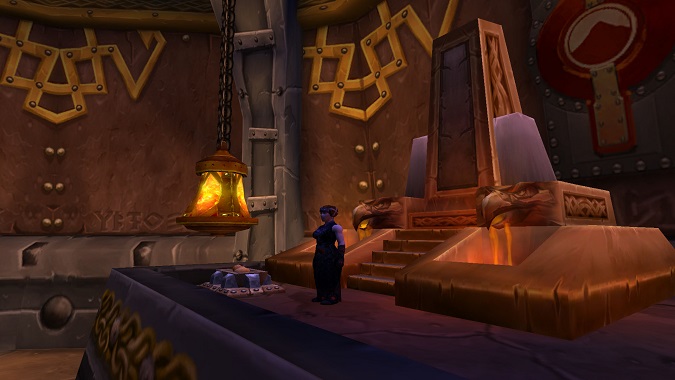 Councils abide, but claims on the leadership remain

There are two other thrones on Azeroth bereft of single leadership, with a council currently operating in place. While neither of these are likely to generate the sort of crisis hinted at in the whisper, there is potential for a conflict over them.

The first is the vacant throne in Ironforge, currently ruled by the Council of Three Hammers. The claimant to the throne is Dagran Thaurissan II, child of Moira, but there’s some question as to whether or not he will someday rule — when Magni returns in the Fault Lines comic Moira is definitively pro-Council, although arguably that may only be her position until her son is age to take the throne. There is also the fact that the descendants of Modimus Anvilmar, the last king of a unified Dwarven race, still have a claim. While Thargas seems unlikely to make a play for the throne, there may be other Anvilmar children out there waiting for an opportunity.

The other vacancy is in Orgrimmar, where no Warchief currently reigns. Instead, a Horde Council comprised of members from each of the player races is now directing Horde activities. There is nothing preventing a new Warchief from being elevated (especially if the Horde was to find itself in an actual war again), but there’s also nothing preventing a claim to the Warchief title. While none of the current leaders are strong candidates for overthrowing the Council, there’s still enough reminders of Garrosh amongst the Horde membership that could motivate an ambitious soldier to claim the title. Of all the possibilities I view this one as the least likely, though, simply because we’ve had enough drama with the Warchief position to last a lifetime. 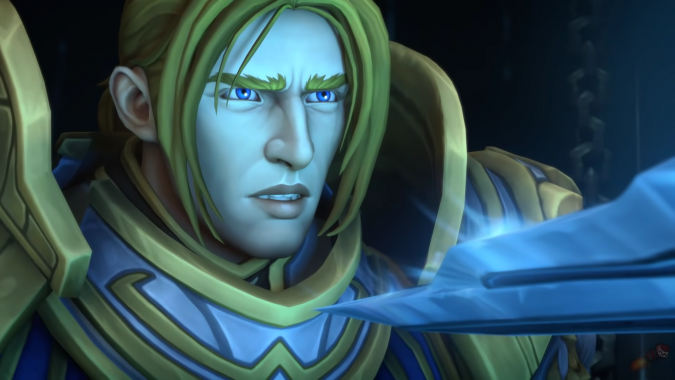 Will Anduin return to Stormwind as a lamb or as a lion?

The last possibility is also the first: the throne of Stormwind. There’s a different angle to look at it, though, and that’s when Anduin returns from his leadership hiatus. We don’t know what is going to happen with Anduin over the next few years, but it’s possible that the Anduin we next see is nothing like the Anduin we once knew.

The effects of the Jailer’s domination are going to linger, possibly until the end of his life. Even if he accepts that he bore no responsibility for what he did while under the influence, the guilt of those actions will continue to gnaw at him. That’s not all that’s happening with Anduin, however.

Anduin made a soft sound of disgust and stood, hovering over her, considering her for a long and tense spell. A wisp of purple energy traveled down his arm, gathering in his palm. It happened in a blink, coming and going, dissipating before Mathias could see for certain what the king had done. It startled Anduin enough to make him stumble backward.

There’s a tantalizing possibility that by the time the current story of Anduin is resolved we will see him in full Shadow mode. If that is the case, would Turalyon (with Alleria at his side) be willing to turn the throne back over to him if he didn’t seem to be in control? There’s another Il’gynoth quote that starts to make sense in this scenario, even if it’s less reliable due to it happening in the first encounter:

The boy-king serves at the master’s table. Three lies will he offer you.

As we already know that Il’gynoth sees the void as the master, perhaps the stage has already been set for a Void-Corrupted Anduin to claim a throne that he never truly surrendered.