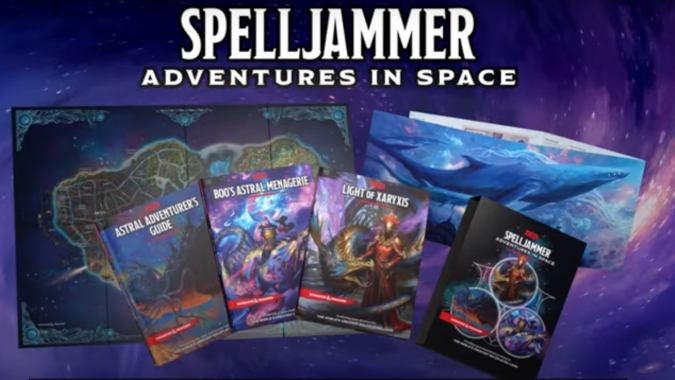 Spelljammer is returning to D&D 5th Edition this August, with a three-book slipcase collection that allows you to run a complete campaign set in the Astral Sea, or Wildspace as they seem to be calling it. Those tricksy halflings at Wizards of the Coast tried to sneak it past us, but we already suspected Spelljammer was coming because races from the original campaign — the Giff — and others from the Star Frontiers game from old TSR were released in recent playtest content, and now we have confirmation. This was part of their D&D Direct 2022 Announcement Showcase video, and for myself I think this was an announcement many D&D players have been anticipating.

Spelljammer, to break it down for people who haven’t heard of it, is literally magic ships in magic space. It’s a fantasy take on the concept of a space opera setting, with your characters essentially crewing a ship that travels throughout the Astral Sea the way age of sail craft cut through the waves. Think Star Wars, but with magic instead of the force, a Spelljamming helm instead of hyperdrive, and the infinite mysteries of the realm between realities to explore. Another way to look at it would be to take all the swashbucking of the Pirates of the Caribbean films and set it in outer space and amp up the fantasy to the level we’re used to in Dungeons and Dragons, with horrific nightmare monsters like the mind-flaying, brain eating Illithids lurking in the dark between worlds.

The three books in the slipcase collection include a 12-part campaign adventure, Light of Xaryxis, for your adventurers to experience as they enter the Astral Sea. But to run such an adventure, you of course need monsters, and that’s where Boo’s Astral Menagerie comes into play, full of old familiar monsters from earlier versions of Spelljammer as well as new foes to bedevil — sometimes literally — your party. And finally, for both players and DMs there’s the Astral Adventurer’s Guide with the skinny on using the Astral Sea as a campaign setting, rolling up Astral Elves; Autognomes (think robots built by and emulating Gnomes); the Giff, a race of hippo people (and if you know anything about hippos, you know that makes them dangerous and tough); the Hadozee, the swashiest swashbucklers and flying monkey people; the Plasmoids, a whole race of ooze people; and the fearsome insectoid Thri-Kreen.

There’s also a double=sided poster map that details the Rock of Bral, an asteroid for adventures and a campaign hub, as well as a DMs screen because come on you gotta have a DM screen in a product like this. It’s up for pre-order on the official site and it’s coming to D&D Beyond, also on August 16.

This is one of the most anticipated campaign settings, one a lot of people have been wanting ever since Wizards announced that classic campaign settings were coming back in June of last year. And by releasing Spelljammer now, and using it to explore the Astral Sea, it’s another sign that D&D will be consolidating its lore in anticipation of the 50th anniversary of the game in 2024.

Blizzard Watch is made possible by people like you.
Please consider supporting our Patreon!
Filed Under: Spelljammer, Spelljammer 5e, Spelljammer Campaign Setting
Advertisement