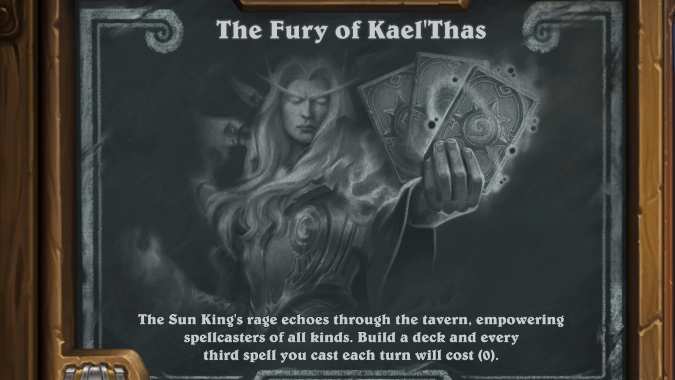 After escaping Castle Nathria, Kael’thas Sunstrider headed down to Bob’s Tavern for an adult beverage and Hearthstone‘s The Fury of Kael’Thas Tavern Brawl. I can’t say I blame him.

After Arthas wiped out most of his race, Kael tried to work with the Alliance. Their commander proved to be such a nasty person, Kael thought he’d have better luck with the Naga! He valiantly led his people through the Dark Portal to Outland where he sought a new power source for the destroyed Sunwell. Betrayed by his allies and his own people, Kael found himself holed up in Tempest Keep with this last remaining loyalists until a group of adventures broke in and confronted him. He barely escaped and rushed back home to Magisters’ Terrace in Quel’Danas, but adventures again sought him out and slayed him in his own kingdom, sending him to Revendreth where Denathrius used him as an anima battery.

What I’m saying is, this guy could use a cold Thunderbrew Lager… which is where we meet him in this week’s Hearthstone Tavern Brawl.

This Brawl is based around the effect of the Kael’thas Sunstrider Legendary card: every third spell you cast each turn will cost zero mana. It’s like you always have an untargetable, unkillable Kael’thas on the board, without taking up a minion slot.

Update: This is now a Constructed Standard Brawl. In previous versions of this Brawl, it used the Wild set of cards. This changes the decks we can use pretty drastically.

This week is a Constructed Brawl, so you’ll need to build a deck, and the size of your card collection will have a huge impact on your success. The deck needs to synergize with the rules of the Brawl. You’ll want a good mix of low-mana-cost spells as activators, and big-mana-cost spells to get the Kael discount as your game winners.

How to win The Fury of Kael’Thas Tavern Brawl

As with almost every Constructed Brawl, there are two components to winning: your deck, and how you pilot that deck. In Constructed Brawls, players usually discover the most powerful lists very quickly, which leads to the Brawl falling into a meta structure like we see on the Ladder — and that means you’ll usually find plenty of strong decks you can use. But you also have to be able to pilot the deck, making the right turn-to-turn decisions in order to win — which is essential even if you’re using the best deck available. The most important thing here is to remember Kael’thas’ ability: your third spell each turn is free, and you’ll want to make use of that to cast the biggest spells you have.

So let’s check out some solid decks to use for this Brawl. 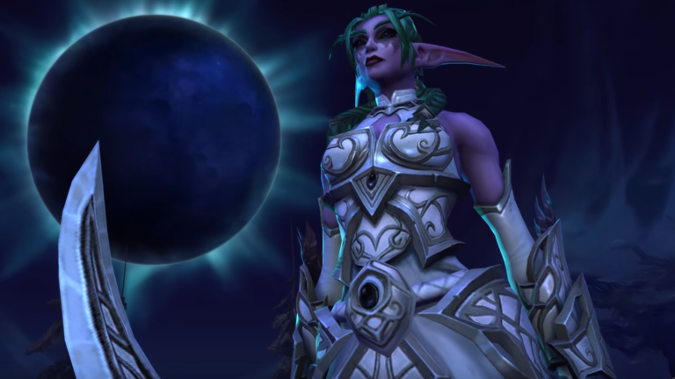 Since this is now a Standard Brawl, so we’ll need to build some Standard decks.

This is a standard ramp druid with Celestial Alignment. Druid has more draw power than Hunter, plus a myriad of cheap, even zero cost spells, and ways to generate threats.

Quest Hunter took one look at this Brawl and just like Professor Hulk in Avenger’s Endgame, said, “It’s like I was made for this.” Quest Hunter was already spell heavy and getting the discount on every third spell makes it that much better. The biggest thing holding you back will be Hunter’s natural card draw weakness.

This deck comes courtesy of our friend Ben Hearthstone (@ben_heathstone) on Twitter. It uses the Kael discount to cast huge spells like Rune of the Archmage, Pyroblast and Drakefire Amulet. An early Drakefire can win you the game outright. 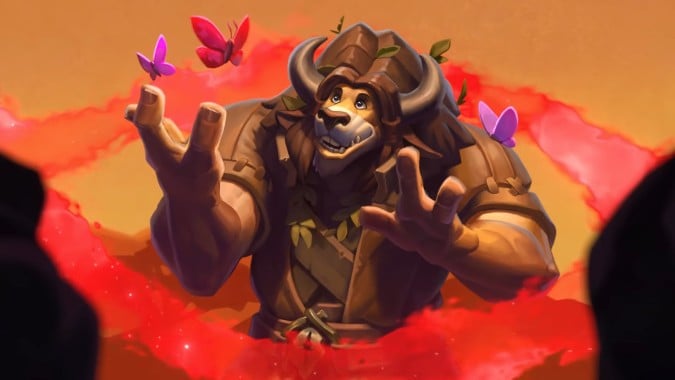 Decks from the old Wild ruleset

These decks are from the previous iteration of the Brawl. Because the Brawl is now using the Standard sets and not the Wild set, these decks are no longer available for use, but this could always change again.

I’m not a fan of this style of deck, which focuses on delivering big bursts of damage in a single turn, but it’s hard to argue its effectiveness.

Druid is quite strong in this Brawl. With Guff on the board and your free spells, you can go from an empty board to an intimidating army.

This takes advantage of Druid’s strong Ramp capabilities and the United in Stormwind quest, Lost in the Park.

This deck is a little less predictable since you don’t know what Evocation will grant you, but if you love high stakes gambling, this might just be the deck for you.

Librams are powerful spell and the Brawl makes them even more powerful by reducing their cost.

Use Kael’s 0 mana discount to cast Idol and get 10/10 Charge minions.

One of these decks should see you through to a victory. Keep checking Hearthstone Top Decks, because there are more Tavern Brawl decks being added by the hour. If you find another great list, share it with us in the comments.

Overall, this was not my favorite Brawl. My collection has fallen behind which limits my options, and there’s a huge emphasis on wild swing turns that can be difficult to overcome. Most games are over before turn 5 so its a nice Brawl for knocking out some quests. Good luck getting this week’s pack!