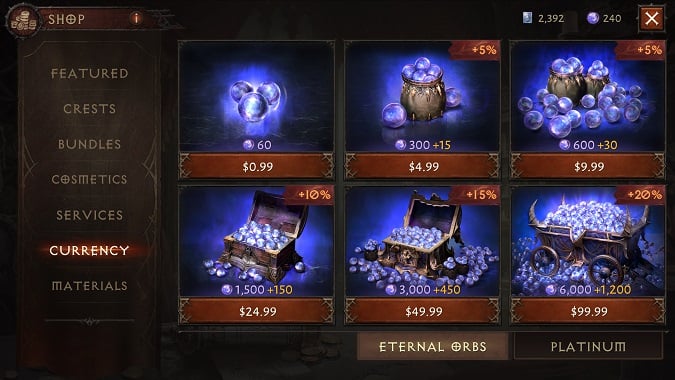 Diablo Immortal’s free-to-play model includes microtransactions through an in-game cash shop for those who wish to get a leg up in their progress — and for Blizzard to make some money, of course. The shop offers many different kinds of services and utilizes different kinds of currencies making it more than a little confusing.

But before we dive in deep, know that you can play the game without spending any money at all. Any item offered that affects gameplay can be attained without buying anything through in-game grinding. The shop items are to accelerate play as well as gain some cosmetics not otherwise available.

Here’s a rundown of what you’ll find in the shop.

Eternal Orbs are the primary cash shop currency except for actual money itself. With them you can use them to purchase Crests (a consumable that increases Elder Rift rewards), rank up your Battle Pass (see below), buy cosmetics, buy special gems for your gear, or convert them the other shop currency, Platinum.

Platinum is used to craft Legendary Gems, extract Skill Stones from Charms (a slot item with a class bonus), and buy items on the Market, the in-game auction house. Note that the only items available for buying and selling on the in-game Market are normal and Legendary Gems and Skill Stones. No armor, weapons, crafting materials, etc.

Cost: 50 Eternal Orbs for 500 Platinum (so roughly 1000 Platinum per $0.99 USD), with no bonus for larger purchases. You can also earn Platinum in-game, so you don’t need to buy it with Eternal Orbs. 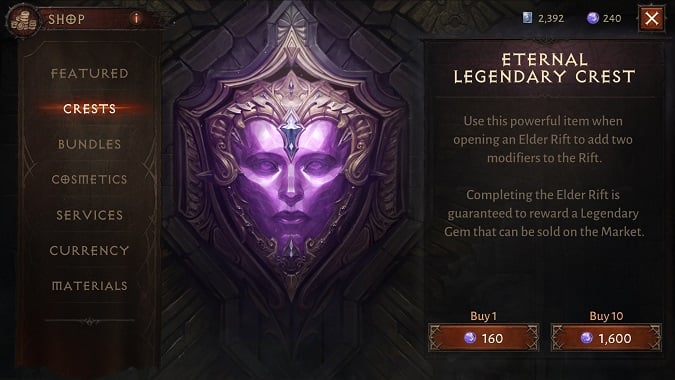 Crests are consumables used to boost the rewards you receive from running Elder Rifts.  Legendary Crests in particular are your best source of Legendary Gems drops since they guarantee one for every run. They will also grant additional Rune drops (needed for crafting Legendary Gems) and boost the amount of Fading Embers (used to buy specific Runes) you receive at the end of each run. Legendary Crests also add random modifiers to your run, both good and bad, affecting both players and monsters. Modifiers may include player run speed increase, more shrines, or random lava pools appearing under the player damaging them over time.

Cost: 160 Eternal Orbs ($2.64 USD) for Legendary Crests with no discount for larger purchases. Crests come from many sources in game, not just the shop. 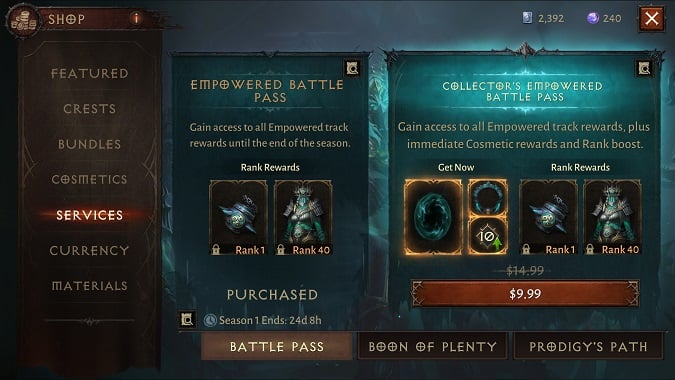 Similar to many other free-to-play games, such as Hearthstone, Diablo Immortal offers a free monthly rewards track that grants you rewards as you rank up through the system via Battle Points. These points are gained by completing different daily activities within the game such as completing rifts, dungeons, or bounties. While Battle Points are the primary way of ranking up your Battle Pass, you can also spend Eternal Orbs to advance to the next rank. Rewards at each rank can include equipment upgrade material, Crests, Legendary Gems, Legendary equipment, Reforge Stones, and a reward currency called Hilts.

For $4.99 USD a month you can purchase an Empowered Battle Pass in the shop. This unlocks extra rewards for each rank that are significantly better, such as more gems, Legendary Gems, Rare Crests, and Legendary Crests. There are also rewards not available on the free track, including keys to a special dungeon chest, Scoria (used to boost your abilities in Challenge Rifts and unlock Helliquary bosses), special chat emotes, and some amazing cosmetics. The Empowered Battle Pass also unlocks extra quests to grant Battle Points not available to those only on the free track. 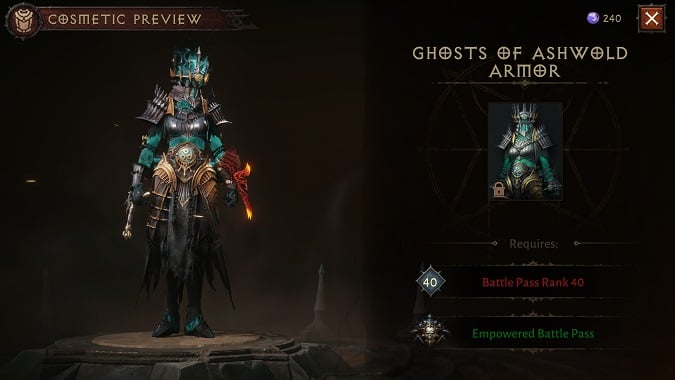 You only need to unlock the Empowered Battle pass once on your account for all your characters to have access to it. However, each character must progress through it on their own as Battle Point gains are note account wide. This is good news as each character can reap the rewards of the ranks they unlock with one exception. Certain high value rewards (right now, just the cosmetic ones like the armor pictured above) can only be claimed once per account, not once per character, and those are clearly marked as such in the Battle Pass window.

For $14.99 USD, or an additional $9.99 USD if you already purchased the Empowered Battle Pass, you can get the Collector’s Empowered Battle Pass which includes all of the above plus a cosmetic for your Town Portal, a custom character portrait frame, and a boost along the reward track. 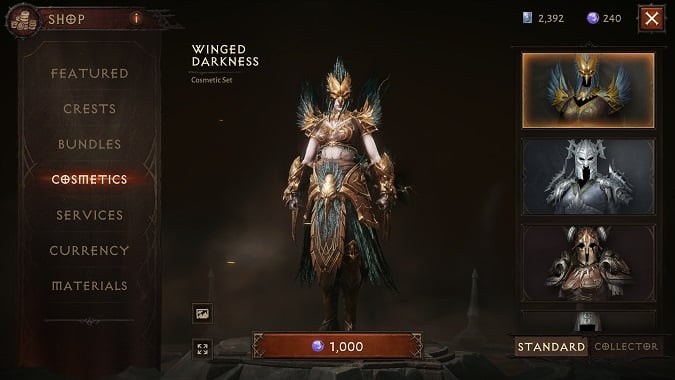 While there is one set of cosmetic armor only available by progressing all the way to the end of the Empowered Battle Pass track, there are many more sets that are available to purchase at any time in the cash shop. These fall into three categories:

The armor and weapons fall in similar themes across the classes (Winged Darkness, Crystalline Echoes, Diablo 2, etc.) but are each customized to your class. 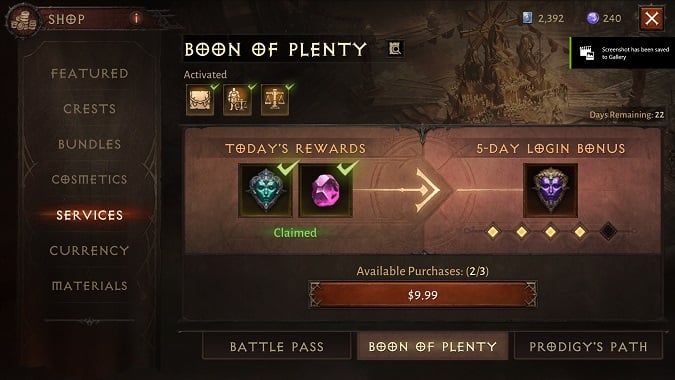 Another shop item charging $9.99 USD for a month of use, the Boon of Plenty includes 300 Eternal Orbs, extra trade slots at the Market, an extra Stash tab, and one Rare Crest along with a gem claimable daily. Every 5 days you login will grant you a Legendary Crest. Note that if you choose not to renew when it expires in 30 days, you will lose your extra Market trade slots as well as your extra Stash tab. Is it worth it? The 300 Eternal Orbs are worth $5.00 USD so it depends if you want the extra Crests for Elder Rift drops which can also be obtained in other ways. The Market and Stash tabs are convenient, but not necessary.

There is a free daily reward for all players that must be claimed once a day to gain the full benefit. At the beginning this grants you random rewards that could include gold coins or normal, rare, or legendary upgrade materials. As you level up, the quality of the rewards will increase. 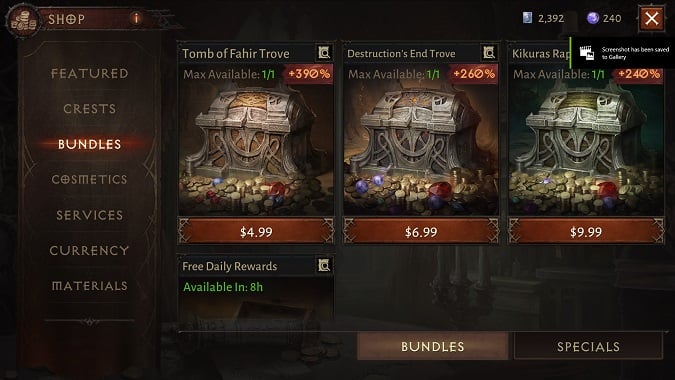 These one-time purchases come in two flavors. The Bundles are one-time cash offers will unlock as you progress through the game. For example, after you complete the Tomb of Fahir storyline, you can then buy the Tomb of Fahir Trove. For $6.99 US you’ll get 300 Eternal Orbs (a $5.00 USD value), two Legendary Crests ($5.28 USD), four Rare Crests, and 36 random gems.  There are quite a few offered as you get deeper in the game and they continue to be available if you don’t want to purchase them when they’re immediately unlocked.

The specials are much more expensive, from $25.99 to $99.99 USD, and offer legendary gems, legendary crests, and crafting materials to upgrade your other legendary gems. A big boost, but at a big price. 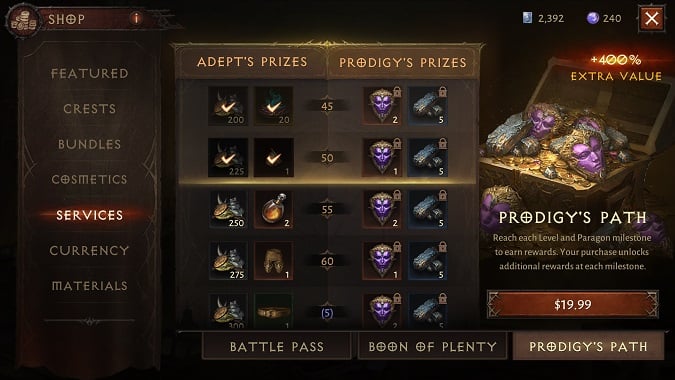 Another reward track system. This one grants you rewards every 5 levels starting at level 45 and then every 5 paragon levels. Like the Battle Pass, there are rewards given for free including crafting materials, armor set items, and and armor upgrade materials. But for $19.99 USD you can unlock more rewards including Legendary Crest and Scoria, the material needed to progress in the Helliquary events.

Reforge Stones can reroll your equipment bonuses and are available for 100 Eternal Orbs each. Equipment bonuses fall into one of six categories and each one can only be rerolled with the a stone from the same category. Additionally, the bonus will be rerolled into a new one from the same category. For example, if you have the “Primary Attack damage increased 4%” bonus on your gloves, that is a Wildfire Family Attribute so you would have to use a Wildfire Stone to reroll it into a new Wildfire bonus from the list of five others in that family. Categories generally fall into groups of similar abilities such as defense, offense, health increases, etc.

That’s everything available in the cash shop at the moment in the Diablo Immortal. We’ll update this guide as the items and prices change, so check back if you’re curious about what’s available in the shop.