What you can and can’t buy with money, and how currency works in Warcraft Arclight Rumble 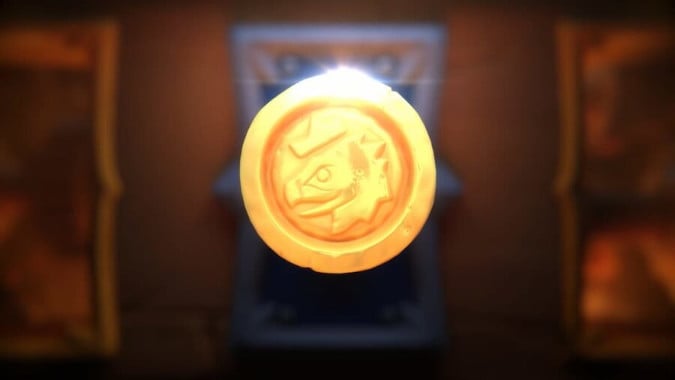 Warcraft Arclight Rumble is (technically) Blizzard’s first Warcraft title built first and foremost with mobile in mind and — especially with Diablo Immortal‘s current reception — has a lot of weight already on its shoulders.

If you’re like me, you saw the preview for the game, immediately had the “Shut up and take my money!” meme in your head, and now are left wondering just how much money you’ll actually have to fork over for Arclight Rumble. Is the game pay-to-play, pay-to-win, or truly free-to-play? And how do Arclight Rumble‘s in-game currencies work? Let’s break it all down.

Please note: Warcraft Arclight Rumble is currently in beta and all of this information is subject to change before release. We’ll be sure to update this post as new information arises! 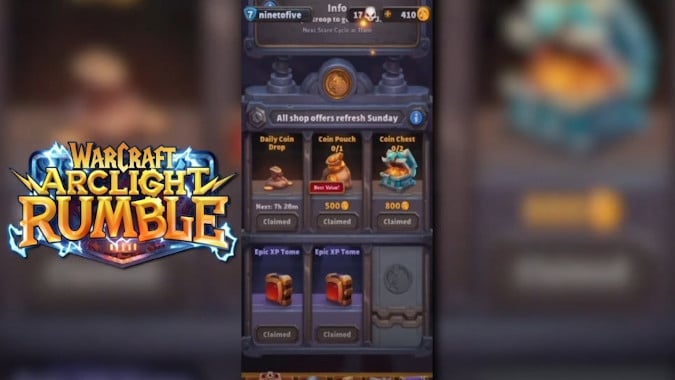 How to earn Gold in Arclight Rumble

As has become standard in Warcraft-themed games, the currency in game is gold. And while you can purchase Gold with real money, there’s a limit to how much can be purchased every week. In-game, you can earn Gold a few ways:

In other words, even if you’re willing to spend money on Gold, the max you’ll be able to spend in a week is roughly $24 USD, and it’ll net you 2,100 Gold. If you don’t want to spend any money, you can still get 2,800 each week from the “daily” Coin Drops. (Whether or not those truly become daily or not remains to be seen, however.) All other steady gold comes from playing the game (I know, I know — that takes time and effort). All of this is nice, as it means people can’t dump infinite amounts of money into the game and overbuy early on, breaking their bank accounts.

…Or it would be, if the shop never featured anything else.

However, there are packs and bundles that will show up in the store, typically as a result of beating a zone and unlocking a new one (i.e., when you unlock Lordaeron, you have a couple days to buy the “Lordaeron bundle”). That sudden appearance, extra gold, and the feeling of limited time without knowing when another will be available does typically create an urge to impulse buy. And while these are usually in the $8 – $15 range, they’ll add up quickly if you opt to purchase them after every zone.

There’s also another one-time purchase, the Arclight Booster, which permanently increases XP earned by 20% and gold earned by 50% — you can buy this for $19.99 USD. This is what I like to call a “free to play, but annoy to pay” feature. It’s not needed, but the game feels a lot better once this is purchased. Of course, this is all beta — it could easily change by the time the game launches. 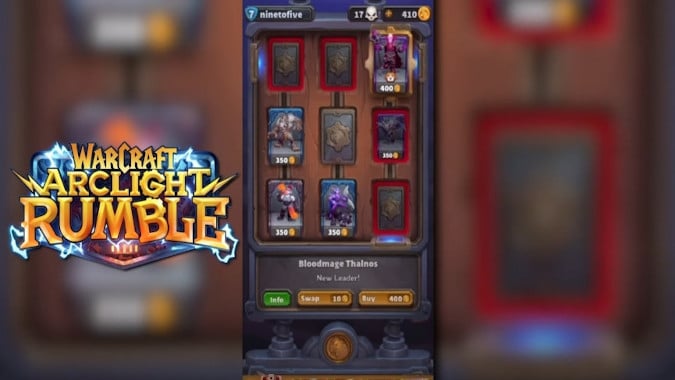 What can be purchased with Gold in Arclight Rumble

Now that we’ve talked all about Gold and the Shop, let’s talk about what it’s all actually good for! Fortunately, gold cannot be used to buy loot boxes. None of those in this game. When something is bought, the player knows exactly what they are buying. The game’s Shop features a screen with items up for display in a 3×3 grid. This is where you’ll get, well, basically everything you need to actually play the game.

The prices are as follows:

Leaders and Troops make up your main gameplay experience, with Leaders typically having a powerful passive effect. Jaina, for instance, makes all spells you cast one level higher. Each Leader can be equipped with six Troops (which includes spells), and you’ll then use that team of 7 (+1 Kobold for mining) on the playing field.

In the end, Gold is the currency you’ll be using, and so far it feels like the long-term of the game will be saving enough Gold to earn every talent and perfect your army. There’s definitely an issue of money-spenders being an issue in PVP — where two players compete to kill a boss fastest — but Blizzard very quickly disabled Talents there, so it seems like they’re aware it could become a real issue down the line.

But without worrying about PVP, and without stressing about who has more toys than you, sitting back, relaxing, and letting the Gold come in at its own pace, this game can be enjoyed without buying Gold for cash or any of the bundles that will be advertised for a limited time (but that must be bought now!)

Blizzard Watch is made possible by people like you.
Please consider supporting our Patreon!
Filed Under: Arclight Rumble, Free To Play, Gold
Advertisement