What have been your favorite low-stakes RP moments in World of Warcraft? 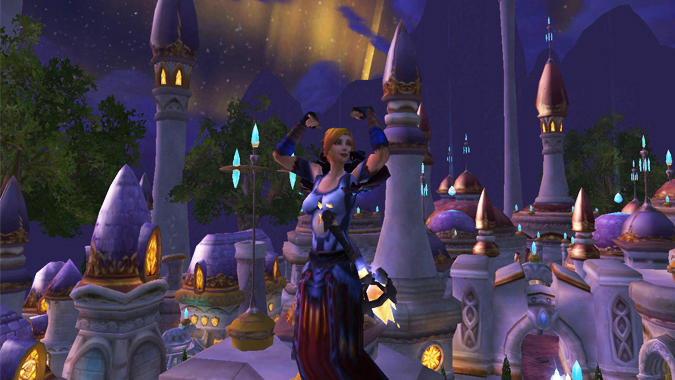 Truthfully, I wasn’t going to write this. Mitch wrote a poem to the writing staff requesting a morning discussion topic, and I responded in the best rhyme rhythm I could think of — namely, a limerick. I had zero ideas for discussion, but coming up with my lyrical response got me thinking about creativity inclusions with game quests. (Thanks, Mitch!)

I’m not talking about RP walking through an escort quest — this is actually a pet peeve. If we’re trying to escape a hazardous situation, give me a good reason why you’re not running, oh escorted NPC. No, I’m thinking about cute things like flexing or dancing for innkeepers to bring an adorable orphan candy from each big city.

Seasonally-themed quests like this are pretty adorable, but they’re not the only ones I consider under this umbrella. Veteran players may remember the quest going from your spawn zone to the innkeeper in the next town, usually bringing supplies. This is a clever way of immersing players into their new world — advancing them to their next questing area while tying into the area’s needs. Although, after leveling 10+ characters I really wonder where all the inn’s supplies went.

Another example that comes to mind is from the Alliance-side arc in Battle for Azeroth. At one point, you’re asked to choose the name for a ship. It’s not impacting to the plot, but it’s a lovely little inclusion that has you actively playing into your current role in the storyline.

That said, I think there are ways to take this too far. I don’t think RP choices should negatively impact how you experience the game. If naming the Kul Tiran ship “Tiffin’s Melody” or “Lionheart” led to Anduin abandoning players, we’d probably be in a very different place when Shadowlands launched.

So tell me, friends: Do you love to make train noises for candy? Would you name a thousand ships in the Kul Tiran fleet? What moment of in-game immersion landed just right with you?