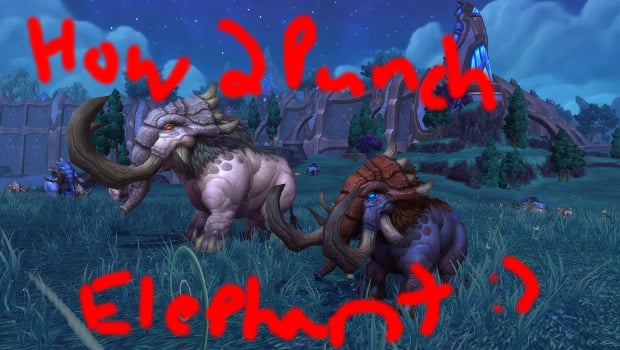 Alex decided to share the best header image ever yesterday. It’s so amazing, I felt like I had to share it with all of you. And if I ever need to punch an elephant, I know who to ask. Speaking of asking, I believe you all have some questions you’d like answered, and I’m perfectly happy to answer them, so let’s get to it!

Q4TQ: Is there any plan to release the WoW Ultimate Visual Guide on kindle/nook/etc?

Not to my knowledge. Keep in mind that my part in that book was over a long time ago, though — I have no idea if that’s something they have in the works or not. Judging by how long the book has been out, I’d give it a “probably not going to happen.”

Q4TQ: I know Blizz has talked about the Legion existing in different dimensions, but what about the different Elemental Lords?  I’m assuming it’s the same as the Legion, but I was curious if it’s stated officially anywhere whether or not the Elemental Planes span across dimensions or if multiple “copies” exist.

That’s a very good question. It’s also another question I don’t really have an answer for. Considering the fact that we now have proof that there are multiple universes out there, I’d give that a cautious yes, there are probably other versions of the Elemental Lords out there too. Or even alternate universes where there were no Elemental Lords at all.

I haven’t gotten to play a lot of Heroes of the Storm (I’m not very uh … good at it to be perfectly honest), but I totally loved Blackheart’s Bay — Garden of Terror is pretty neat too. I’m not a huge fan of Haunted Mines. It’s not a bad map, I just don’t find it as visually “Oooo!” as the others.

I’m packing for a move to the Seattle area.  Today, this will involve stuffing several WoW-related stuffed animals into boxes – the griffin, the wind rider, and the netherwing faerie dragon.  And the Starcraft transforming zerg-thing.

So, question for the Queue: what WoW-based plushie would you really like to see?

I am of the opinion that they should seriously go the Beanie Babies route and start releasing battle pets. Release them in limited edition “team” sets that are retired after a certain period of time. Make them inexpensive, but collectible. I would be all over that.

Nope! Once you have that achievement, you’re good to go.

Does anyone know if the ahead of the curve achievements are going away with 6.1?

Nope! Highmaul and Blackrock Foundry are both part of the first tier of raiding for this expansion. You won’t see the Ahead of the Curve stuff removed until the next tier of raids come out — whenever that happens to be.

qftq: how do you justify (lore and rp wise) alliance having warlocks?

I think it was mainly a matter of fighting fire with fire — the Alliance understood that the orc warlocks of the Horde were a force to be reckoned with, and some spellcasters decided the best way to combat a warlock was to fully understand the powers that they wield, and use those powers against them. Keep in mind, that’s my opinion, not official lore.

Any word on if followers that are working in buildings won’t count towards your follower count?

I’m not quite sure what you’re asking here, but I’m assuming it’s whether or not a follower assigned to a building will count towards your 20 or 25 active followers. Yes, they still do, and they will continue to do so in patch 6.1. However, followers assigned to buildings will now gain experience while they are working, so you aren’t missing out by having them assigned to a building instead of out on a mission.

That’s it for today’s Queue — be sure to leave plenty of questions for tomorrow!