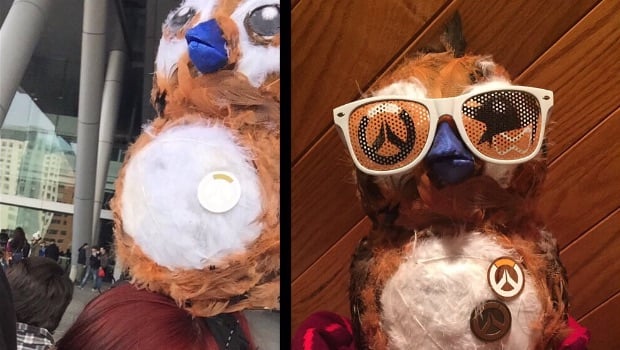 Sure, we all love Pepe, but the downside of everyone’s favorite feathered friend is that he’s stuck inside World of Warcraft while we (at least occasionally) like venturing out into the real (or at least non-virtual) world beyond Azeroth. So how do we take Pepe along? Liz Lirakis, the artist behind Tracimoc, came up with a solution in the form of this Pepe cosplay that she took to PAX East earlier this month.

Though it was the Pepe that caught our eye, Liz makes a lot of comics-based art, including this Overwatch wallet made out of a PAX poster. So just how did this Pepe come into being — and what else does Liz make? We caught up with her to talk art.

Blizzard Watch: I’m making the guess that you play WoW: what do you play?

How did you get started making art?

I have always loved making things, growing up I was always doing crafts and art projects during my free time. During high school I was introduced to a dark room and became enamored with photography. I majored in Film and Media Studies in college, where my senior project consisted of a 3 minute wire armature stop-motion film. Growing up loving Nightmare Before Christmas, it was exciting to have my own chance to create and give characters life through film.

Since 2010 I have switched gears to focus more on recycled paper art, mainly creating “Tracimoc, It’s Comic Art Backwards,” in which I take original comic book books pages and transform them into useable and wearable art. Mixed media has always been a passion of mine and I hope to continue creating for a long time.

To me Pepe is both Cosplay and Art, but I think that really all cosplay is art. Cosplay in the simplest terms refers to act of dressing up as a character, but once you “put on your costume” cosplaying turns into a form of performance art. In this case, I just created my own real life NPC — Pepe, who accompanied me as a permanent weekend PAX buff.

Pepe’s a bit different than your usual comic art — why did you decide to make him?

I made Pepe just simply because I enjoy WoW, enjoy making things, and adore that little bird. I really enjoy cosplaying, and am a big endorser of, what I call, the “comfy cosplay.” The “comfy cosplay” allows the expression of something you love and inspires you, with the versatility that allows for an easy going, comfortable and accessible convention experience. Pepe also was a more unique reference, and it’s always exciting to meet new people who recognized him and wanted to talk about WoW, because very few of my friends play. 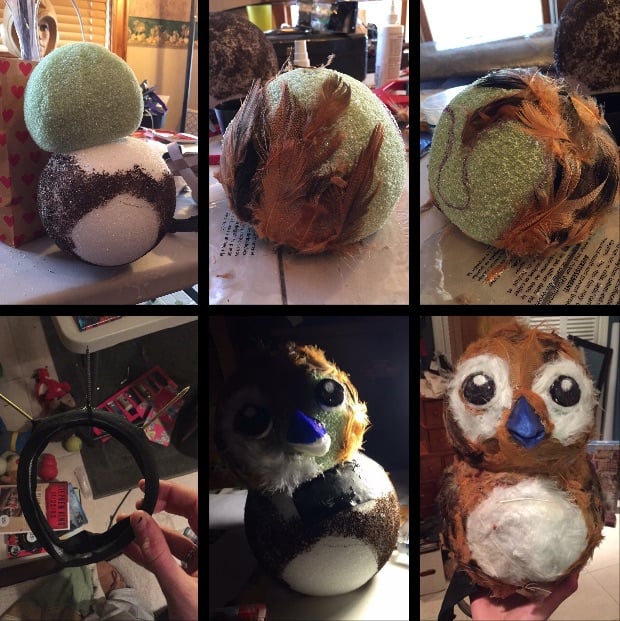 Could you give us a step-by-step on what was involved in making Pepe?

I wish I remembered to take more pictures of my process. I always make a point to try and remember but then seem to get caught up in making. Below are some images I did take during the process.

Pepe started off as two square pieces of styrofoam. I filed them down into the general shape of his head and body based on screenshots taken of him at multiple angles. I painted brown underneath his coat, which ended up being unnecessary because the feathers completely covered his body.

I attached the feathers using a spray adhesive because thicker glue would have caused the feather hairs (?) to clump up. His eyes and beak are molded from U Mold Plastic, painted with acrylic paint, glazed and adhered with epoxy. His head is adhered to his body with the use of tape and lots of epoxy. Thankfully he was fairly light and the epoxy bonded quite nicely.

The hardest part was trying to figure out the best way to attach him to my head. A friend suggested using nails, which ended up working perfectly. The base is a headband, covered in fabric with nails adhered with epoxy. I slathered epoxy on the nails themselves and pushed them into Pepe’s styrofoam base, and voila! Pepe!

How long did Pepe take to make?

Pepe sat as two pieces of styrofoam for a solid week or two, as I decided how to tackle creating him. I carved his body and head in an afternoon, along with molding the shape to his nose and eyes. Then he sat naked until I put aside space and time to start adding his feathers. Over all I say I spent an afternoon and 4 nights making him. There is a lot of waiting time since I needed to let paint and epoxy fully dry between steps. 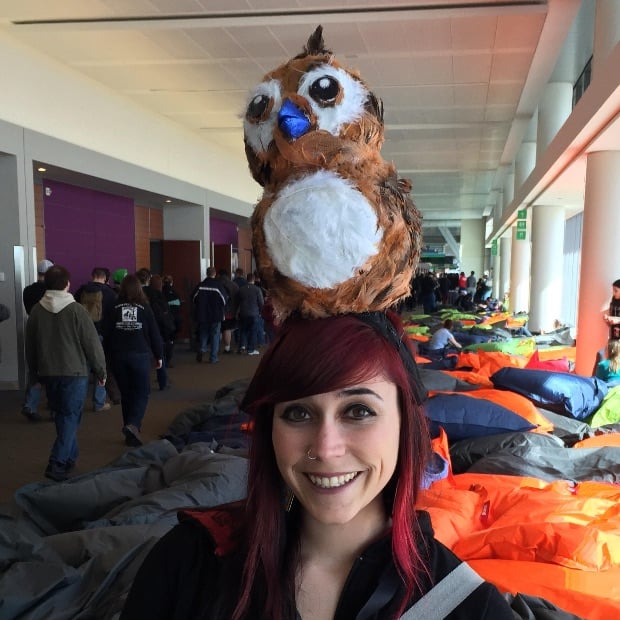 How did Pepe hold up over the PAX weekend?

Pepe held up surprisingly well over the weekend! No scruffs or scratches. He is happily perched in my personal garrison, sporting his Overwatch and Overwatch MVP pins along with some rad sunglasses.

What kind of reaction did Pepe get on the show floor?

I went into PAX thinking “this was super fun to make and I love Pepe and I know there will be handful of people who recognize them and it will be awesome.” Then within 10 minutes of me getting into the convention I was proven wrong. Usually I would see “I know this is familiar” glare proceeded by “Is that Pepe?!”

The older men who were just employees of BCEC got a huge kick out of Pepe, just smiling, laughing, or making some adorable “dad joke.” “I don’t mean to alarm you miss, but did you know there is a bird on your head?” — I heard that endless times throughout the weekend. My favorite was some fellow crowd member who just walked by me, looking straight down and whispered “Pepe is love, Pepe is life”. ::YES!::

On Day 1 I had posted Pepe and I in /r/wow on reddit got an unexpectedly large amount of upvotes. So Day 2 and 3 were also full of “I saw you on Reddit!” I never imagined that Pepe was going to be so popular, but clearly that little bird has stolen everyone’s hearts in WoW!

Right now I am working on making as much as I can before Con Season officially kicks off and I head off to the Bay Area Maker Faire in San Fransisco (May 16-17). The fall I will be an artist at various comic cons including New York Comic Con, Boston Comic Con, Hartford Comic Con, Rhode Island Comic Con and more! While continuing to make my comic art, I am also working on narrowing down my next cosplays (Tracer would be fun!), as I always love to cosplay while working at my booth.

Oh, and of course dreaming about being able to attend BlizzCon one of these years as an attendee, there is too many amazing things to see at video game themed conventions for me to ever be able to work them! My goal is to work on branching out to more video game themed merchandise. I am currently scouting for hard copies of strategy guides, collecting MtG and WoW comic books, and gathering some of the old WoW playing cards to use in my art. So be sure to keep an eye out for some one of a kind video game themed items that will slowly be popping over over at Tracimoc.com!

That’s all for BlizzCrafts this week — but check back next week for another crafty interview! Have Blizzard arts and crafts of your own you’d like to see on Blizzard Watch? Send them our way! Submissions and suggestions should be sent to liz at blizzardwatch dot com.

Blizzard Watch is made possible by people like you.
Please consider supporting our Patreon!
Filed Under: Arts And Crafts, Cosplay, Hand-made, Pepe, Pepe Cosplay
Advertisement