Breakfast Topic: What other costumes do you want for Pepe? 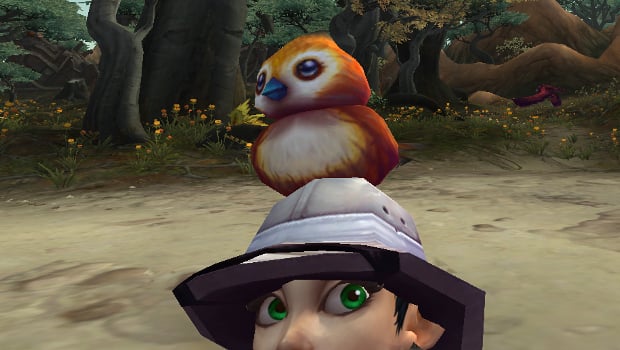 Ah, poor Perky Pug. Though your adorable little costumes were introduced in 5.4 with four hats available on the Timeless Isle and three more for Hallow’s End, another contender is coming to steal your (literal) crown. Pepe, the little feathered dynamo who perches in player garrisons, is getting an assortment of four cute little costumes of his own in patch 6.2. Only one, the Pirate costume, borrows heavily from established Perky Pug costumes. The Viking Helm, Ninja Shroud, and Plated Helm are all unique to Pepe. This means there are 6 existing Perky Pug costumes Pepe hasn’t yet got his tiny talons into, let alone all the other helm options that may make for a dashing fashion statment.

This lends a wide array of speculation and imagination: which other costumes would look stylish on Pepe?

I do love the idea of having a pirate hat for both my Perky Pug Bertha and Pepe, especially when the shipyard is in the offing. Most adorable band of cutthroats this side of the Maelstrom. However, I doubt being brigands is going to take up as much of my time as being a pet battler extraordinaire, so I’d much rather have Safari Hats for both of them. There’s always going to be seasonal appeal for me in accessories like the Spring Circlet or the Hallowed Helm. How adorable would Pepe be with a teeny tiny pumpkin on his head? And of course, for formal occasions, Pepe needs (yes, needs) his own Lil Starlet sunglasses costume.

So, which costumes would you beg Blizzard to add for Pepe in the future?