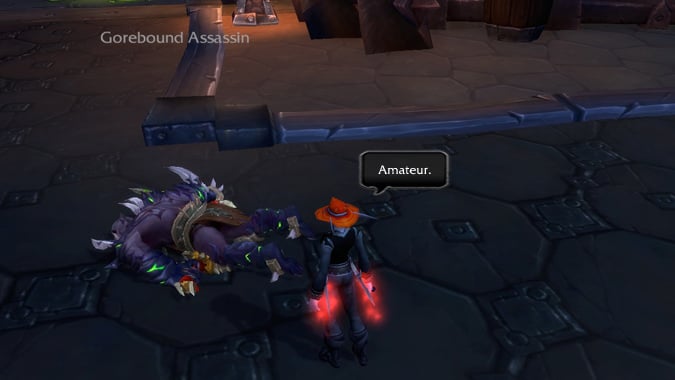 Ah, Hellfire Citadel! A vast new raid to playfully plunder, a gaggle of new bosses to gleefully stab, a whole wor– wait, what just ambushed me in the hallway? Are there Rogue NPCs patrolling through this raid instance? Why is their stealth more effective than ours? Why does their Shadowstep appear to have no cooldown? Great galloping Garonas, we must capture one of them and figure out how to adapt these advances for ourselves! No, raid group! Stop killing and looting them! We have to lear– oh, nevermind.

Secret uber-Rogue NPCs aside, the new Hellfire Citadel raid instance brings with it a host of new challenges (and new gear upgrades!) for our class. Let’s take a look at three of the key topics raiding Rogues ask about most when making their way through a new set of bosses.

What spec should I play?

The short answer: Unless you’re part of a competitive raid group, all three specs are fine.

The long answer: The general rule of thumb still holds that, if you can play all specs equally well and have decent weapons for all of them, Combat is going to be your best option on multi-target fights and Assassination/Subtlety will be preferable on single-target fights. Most of the boss fights in Hellfire Citadel aren’t so cut-and-dry, however.

Look no further than Hellfire Assault, the first fight in the instance, for an example of this complexity. Although most of the fight features many targets running around within range of your pointy poison sticks, very often you’ll need to focus your damage on specific targets (such as Gorebound Felcasters), which means that although you’ll increase your overall DPS by going Combat and turning on Blade Flurry, you won’t be doing your raid many favors by diverting some of your damage to non-priority targets — or by allowing a Gorebound Terror to live long enough to get another brutal Felfire Volley off.

Those Felcasters/Terrors, in fact, provide another example of why blindly using Blade Flurry is potentially dangerous for your raid: Because Felcasters transform into Terrors when they reach 40% health, if you’re cleaving damage onto a group of targets that includes more than one Felcaster, your multi-target hits may help trigger multiple transformations at the same time, which can easily become more than your healers can handle. 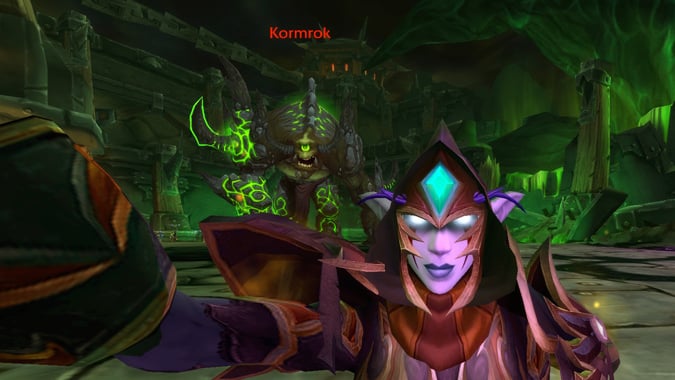 I just spent a lot of time talking about Hellfire Assault in particular, but it’s meant to serve as an example; this entire raid instance is filled with similar cases, where you want to use multi-target damage only when the raid situation calls for it — even if you’re surrounded by enemies just begging to have damage cleaved onto them. This doesn’t mean that Combat is a bad spec to use in such fights; it just means you need to be careful about when you use it to murder all the things.

Further complicating the “what spec do I use” question are fights like Kormrok. This is primarily a single-target affair — except when the boss casts two very specific spells, Grasping Hand and Dragging Hands, during which your ability to damage nearby targets could be crucial to your raid’s survival. If your raid group has trouble killing those hands, Combat may be the way to go on that fight, even though you’d only use Blade Flurry for several seconds. On the flip side, if your group is already strong in its AoE damage capability and the hands are not an issue, then you can probably go with Assassination/Subtlety. When in doubt, check with your raid leader. (If you’re in Raid Finder, use your best judgement.)

Speaking of single-target damage: As I mentioned in our Patch 6.2 rogue Q&A last month, the theoretical DPS gap between Subtlety and Assassination has seriously narrowed in Patch 6.2 — to the point where, depending on your gear (particularly set bonuses and trinkets), Assassination may slightly surpass Subtlety in pure DPS potential.

As a result, in most single-target situations, you’re not likely to notice much of a difference in performance if you go with Assassination over Subtlety or vice versa. However, that’s assuming that you’re equally good at playing both specs; if you notice a dramatic DPS difference when you play one spec versus the other, odds are you’re not playing one spec optimally. You can either consult guides and experts — and then practice, practice, practice! — to improve your performance, or you can opt to just play the spec you’re more familiar with. 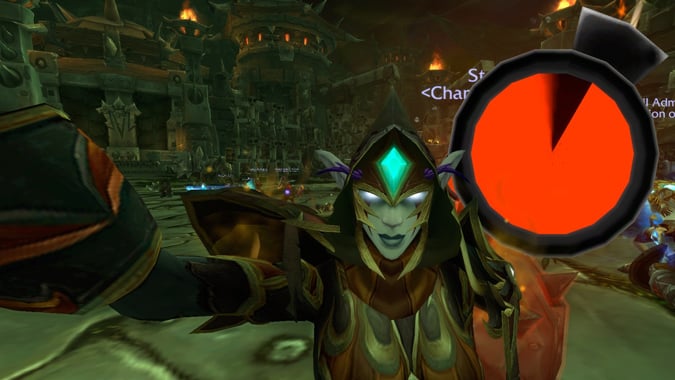 What are the best gear drops?

The short answer: I don’t know, I just use ShadowCraft.

The long answer: Warlords of Draenor has given us more options for gearing, and more variations within gear drops, than we’ve ever seen in WoW‘s history. That makes the age-old question, “What’s best-in-slot?” a more complicated one to answer than ever before. At the same time, tools like ShadowCraft, which I wrote a beginner’s guide for in last week’s column, make it easier than ever to determine whether a specific gear drop is an upgrade for you — and to help you decide whether that upgrade is worth spending a Seal of Inevitable Fate (or precious DKP) for a chance at snagging it.

What I’ll provide here, in lieu of a full breakdown of your options, are a list of the various Rogue-friendly gear drops in Hellfire Citadel, courtesy the incredible database goodness that is Wowhead. (Each list includes normal-mode, heroic-mode and mythic-mode variations on items; Raid Finder-level gear has different names, and will be toward the bottom of each list.)

When using ShadowCraft (or when assessing the value of different upgrades generally) there’s one gear slot in particular that can be very hard to assess: trinkets. This raid tier in particular has given us a set of Rogue trinkets — Fel-Spring Coil, Mirror of the Blademaster and Soul Capacitor — that are all but impossible to reliably “rank” in terms of value. This is because many raid fights will have moments where one or more of these trinkets could be awesome to have (for instance, in the Kormrok fight I mentioned earlier, timing Mirror of the Blademaster so it activates just after Grasping Hands spawn) and moments where one or more of them could be useless, if not downright harmful (in that Hellfire Assault fight, Mirror’s effect may be largely wasted if your targets are running all over the place — and it can be dangerous if you trigger it within a crowd of those Gorebound Felcasters I talked about earlier). So don’t just pay attention to DPS value when deciding which trinkets to equip. 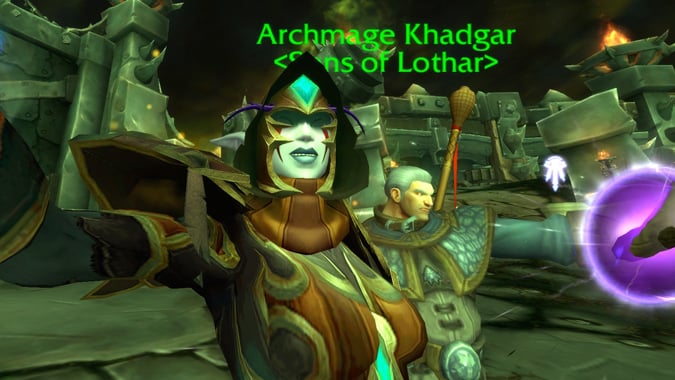 What tips do you have for each raid fight?

The short answer: Use Cloak of Shadows and Feint a lot.

The long(er) answer: A Rogue player by the name of Graffin has done a fantastic job compiling a list of fight-specific tips over on the Ravenholdt fansite. Most of these provide advice regarding when our various defensive abilities — Cloak of Shadows, Feint, Smoke Bomb and Vanish — will work and when they won’t, which can help you decide whether and when it’s worthwhile to use them.

Beyond that, as I’ve mentioned throughout this column, many raid fights will feature an array of situations where, depending on what your raid team needs most, you’ll want to adjust your own approach accordingly — choosing one spec over another, turning on the multi-target damage or staying on your primary target, swapping out your trinkets and so forth.

For this reason, the best closing advice I can give you on how to prepare your Rogue for the challenges Hellfire Citadel has in store is: Know the fights. Know your class. Heed your raid leader, and excel in your assigned role. If there’s a mob that casts a spell you’re asked to help interrupt — say, the Hulking Terror’s Rending Howl during the Kilrogg Deadeye fight — have that Kick button keymapped and ready to go, and keep a very close eye on that mob’s cast bar so you know when it’s time to fling foot.

Got your own morsels of wisdom — or requests for help — based on your own roguely experiences in Hellfire Citadel so far? Specific talents or glyphs you’ve found especially useful in specific fights? Let’s talk about it down in the comments!