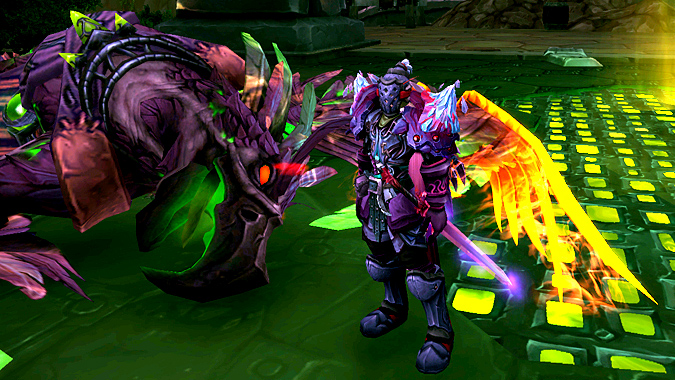 Hellfire Citadel‘s upper echelons beckon, Holy Paladins! Awaiting us are birdmen, robots, an undead demon (how does that even work?), and the big guy himself, Archimonde. Let’s get to it.

If you have your Tier 18 2-piece bonus, you may want to take Glyph of Beacon of Light and start actively swapping your Beacons around. The 2-piece bonus is strong, but I’ve found that if you don’t change your Beacon targets frequently, much of your Beacon healing will be wasted overheal. It’s hectic and a bit more challenging, but it does result in more effective healing. 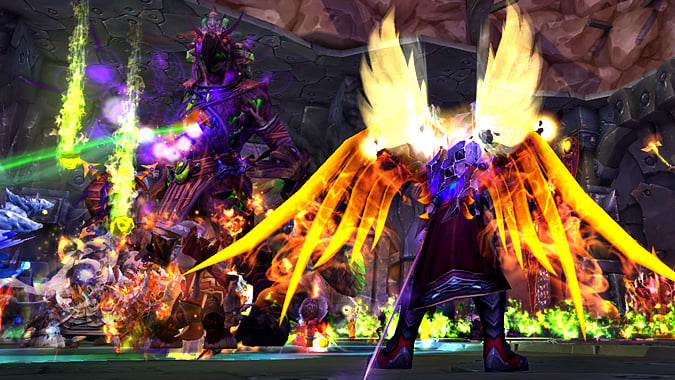 First things first — if you plan on doing this fight on Normal/Heroic, do your raid a favor and go download Iskar Assist. This addon gives you a small set of unit frames that you can click on to pass the Eye of Anzu, a special Iskar mechanic that will wipe your raid if not handled properly. The addon is compact and easy to use, but if you would prefer not to use it you can use the following mouseover macro instead.

During ground phases, toss the Eye around to nullify Phantasmal Winds and Phantasmal Wounds. (Or just heal through Phantasmal Wounds.) Holding the Eye applies a small stacking DOT, so don’t hold onto it for too long. Run Fel Chakram and Fel Incineration quickly out of the raid (this is a nice fight for Speed of Light).

In the first air phase, only a player holding the Eye will be able to see (and therefore remove) the Fel Bomb debuff. In the second, a Shadowfel Warden will channel Fel Conduit, dealing heavy raid damage until interrupted by a player holding the Eye. In the final air phase, a Fel Raven will debuff its tank with Phantasmal Corruption, dealing nasty pulsing damage unless that tank is — you guessed it! — carrying the Eye.

Since Holy Paladins can both dispel Fel Bomb and interrupt Fel Conduit, we can handle both of these threats in the first two air phases. For the third air phase, the Fel Raven tank will frequently need the Eye to avoid Phantasmal Corruption, so it’s easier to just let them handle interrupts. 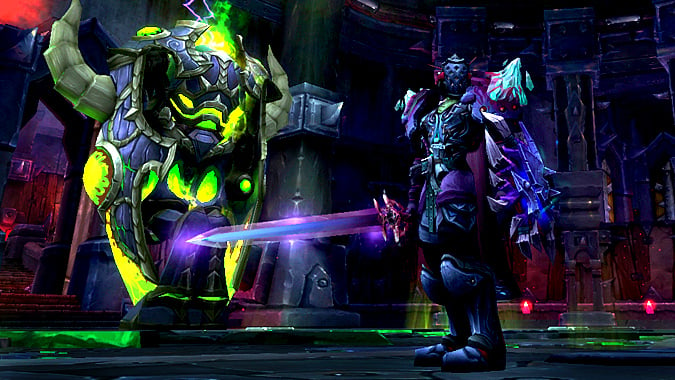 I’m a big fan of fights where we get to do something extra that’s not just healing. With Iskar, interrupts were vitally important, and Socrethar is more of the same!

In phase one, tanks will take heavy damage from Reverberating Blow, especially if your raid chooses to not have melee players help soak the hit. A tank can take one Blow without much trouble, but will probably need help for further ones. For these later hits, take Clemency and make sure tanks have Hand of Sacrifice or another healer’s defensive cooldown active.

In phase two, it’s essential to interrupt Socrethar’s Exert Dominance casts. Rebuke has a short cooldown, so if your raid is light on interrupts get in there and contribute! Wait until after Gift of the Man’ari goes out, though — you don’t want to start pulsing AOE damage when you’re clumped up in melee. If you aren’t currently able to interrupt Socrethar (because you’re away from him with Gift, or because a Sargerei Dominator is alive), interrupt Sargerei Shadowcallers instead. Use Devotion Aura during Apocalypse. One tank will be piloting the construct and won’t need heals, so swap Beacon of Faith onto players with Gift of the Man’ari, who will be taking steady damage. Cross your fingers that he drops your tier hands. 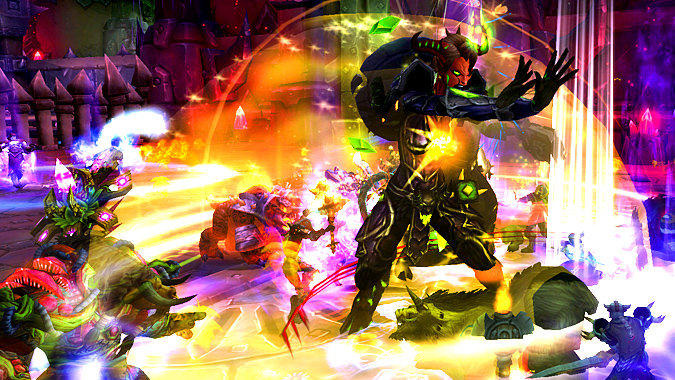 She may be a corrupt, tyrannical evil paladin, but Velhari seems pretty rad. Sure, her Edict of Condemnation is similar to our Execution Sentence, but man, Edict is way cooler. I wouldn’t mind getting that as an ability next expansion. Velhari also drops an intellect two-hand mace on Normal/Heroic! This is amazing in itself (imagine all the transmog options!) but it also has our best stats! Velhari, you’re the greatest.

In all phases, use Divine Protection when soaking another player’s Edict of Condemnation. If Edict is targeted on you, get away from everyone and Divine Shield. In phase one, don’t move unless stepping out of fire or helping to split Edict. Swap Beacon to players who receive Touch of Harm, and don’t dispel it unless you urgently need to heal that player. Phase two, use cooldowns like Devotion Aura and Avenging Wrath for Edicts, and help interrupt the Ancient Harbinger’s Harbinger’s Mending. In phase three, Velhari deals high tank damage, so Clemency and Hand of Sacrifice are invaluable, like usual. 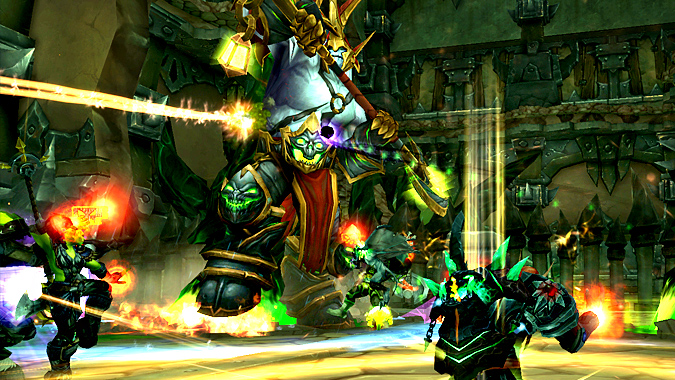 Hey, there’s Grom! About time we finally see him. Of course, he does as much in this fight as he’s done the entire expansion, which is to say, basically nothing.

Zakuun largely revolves around stopping Wake of Destruction from hitting Fel Crystals or players with Latent Energy. Holy Paladins who take Unbreakable Spirit make good Wake of Destruction “blockers,” since intercepting a Wake deals Shadow damage. Swap Beacon of Faith to players who receive Befouled. During Disarmed, Zakuun becomes Heavy Handed and deals more damage to tanks, so save Hand of Sacrifice for these phases, and use Devotion Aura when players explode from Seed of Destruction and emit Wakes. 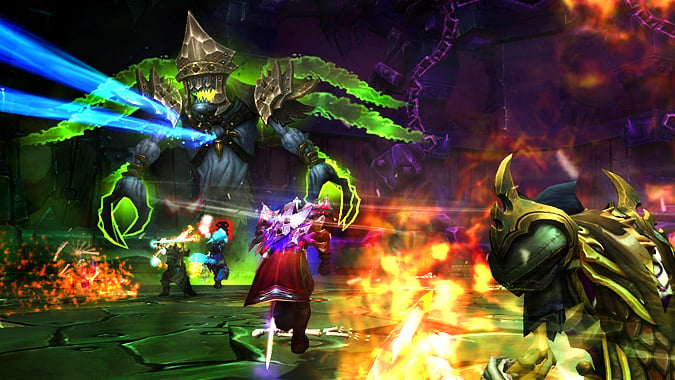 I hope you’ve gotten used to slamming your Rebuke key, because it’s about to get a big workout on this encounter. On Normal/Heroic, Wild Pyromaniac imps will cast Fel Orb for most of the fight, and it’s really important to let as few of these through as possible. Interrupt them, hit them with Fist of Justice, even help finish them off with Hammer of Wrath when you can. Tauren and Blood Elves can also employ War Stomp and Arcane Torrent. Humans and Dwarves can stand around and admire their beards, I guess.

Run Fel Surge out and drop Chaotic Felblaze as close to the edge of the platform as possible. In phase two, treat Void Surge the same way, only on the other side of the room. Use Devotion Aura to counter a Black Hole‘s raidwide damage if players are low on health. Holy Paladins are also good candidates to soak Black Holes, as Divine Protection will negate much of the Singularity damage. When Xhul’horoc reaches 20% health, cycle healing and defensive cooldowns constantly, as this phase is incredibly intense. Xhul can drop tier shoulders, or the very nice Unstable Felshadow Emulsion. 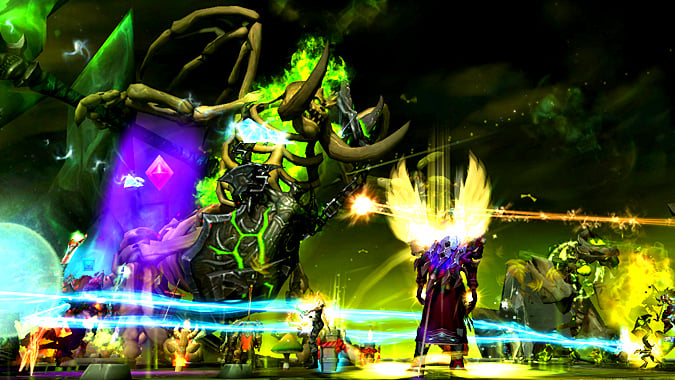 This zombie pit lord is a long slog, but the reward is potentially our tier chest, so it’s worth it.

In phase one, players with Mark of Doom should run to the central fire pool to trigger Mark Eruption — don’t be in the blast radius, and be ready to heal these players up. Dispelling Curse of the Legion will spawn a Doom Lord, but since Paladins can’t dispel curses, that’s someone else’s problem. Interrupt Shadow Bolt Volleys (Doom Lords) and Fel Blasts (Fel Imps) whenever possible.

In phase two, Mannoroth’s Glaive Combo will require substantial healing, and is a good time for Hand of Sacrifice. Help split damage from Mannoroth’s Gaze (use Divine Protection), but if you are the target, you can solo it with Divine Shield. It will still deal the AOE damage around you, though, so wait until you’re clear of the raid before bubbling. In phase three, be close to Mannoroth so Shadowforce doesn’t push you off the platform. In phase four all of Mannoroth’s abilities become empowered and more dangerous. For the most part we deal with them the same, but Empowered Mannoroth’s Gaze leaves behind void zones now. Their size depends on how many players helped share the Gaze damage, so only one or two players should help soak each one.

Three words: Libram of Vindication. Beg, steal, do whatever you can to get your hands on this amazing item. (Okay, please don’t actually do any of those things, but it really is an exceptional trinket that will be a huge buff to your healing.)

If targeted by Doomfire, kite it away, and if targeted by Allure of Flames, clump together so all the Doomfire gathers up neatly. Move under players sent flying by Shadowfel Burst to help split the ensuing damage. If you are targeted with Shadowfel Burst, you can Divine Shield the impact explosion, but call it out so other players know to move out of the way. Death Brand and the Shadow Blasts that follow will brutalize your tanks, so give them a Hand (of Sacrifice).

Use Devotion Aura to survive Shackled Torment explosions, and swap Beacon of Faith to players waiting to trigger their Shackled Torment debuffs. Avoid Wrought Chaos/Focused Chaos beams, Consume Magic circles, the fixating Living Shadows, and Rain of Chaos meteors. When Infernal Doombringers show up, you can stun them with Fist of Justice. If assigned to go to the Twisted Nether, kite Void Stars away if fixated, avoid Nether Storm, and be prepared for the gradually-increasing Nether Corruption damage.

That’s it for the Citadel! Enjoy the end cinematic, marvel at our Legendary Ring, and tune in Thursday to find out what our next expansion will be!