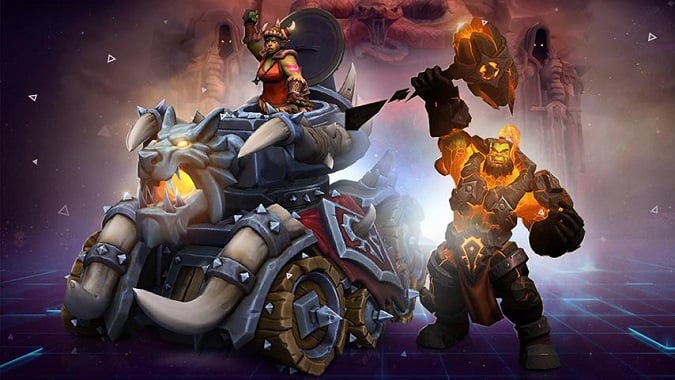 The Heroes of the Storm shop looks a little more intimidating with the new Doombreaker Bundle — Sgt. Doomhammer and Earthbreaker Thrall have joined the fray! The Sgt. Doomhammer skin gives everyone’s favorite no-nonsense tank an Orc-themed overhaul, because who doesn’t love more Orcs? Meanwhile, Earthbreaker Thrall gives players a look at what it might mean if the Aspect of Earth were fully consumed by living rock. Each of these can be bought individually or as part of a dynamic bundle that includes both of the initial heroes as well as their new skins. There are some things to note before buying, however.

While both of these skins are certainly visually impressive and come with their own set of themed abilities, some players are disappointed with the way Sgt. Doomhammer’s voice has been altered to be more fitting of an Orc. While the voice admittedly does sound a bit off, part of players’ upset may also be due to the skin page not mentioning an altered voiceover as a feature. Similarly, some of Earthbreaker Thrall’s themed abilities match some color variations better than others. While blue lava certainly would have looked cool, I personally didn’t notice this as much as Sgt. Doomhammer’s voice. However, if you are considering buying new skins or heroes, always remember you can view them individually in the shop and use the “Try” button to give that particular skin or hero a test run.

If none of the above sounds like it will bother you and you don’t own any of the heroes in the bundle, Sgt. Hammer is currently on sale. A player on Reddit noted that purchasing Sgt. Hammer individually first and then buying the bundle will save you some money, thanks to the way dynamic bundles now work. While Blizzard may change this, it’s a good way to get the bundle at a slightly reduced price for now. If you’d like a better look at the skins, Blizzard’s official preview of them both begins at 1:35 in the video below.

See you in the Nexus!

Blizzard Watch is made possible by people like you.
Please consider supporting our Patreon!
Filed Under: Doombreaker Bundle, Dynamic Bundles, Earthbreaker Thrall, Heroes Of The Storm Skins, Sgt Doomhammer
Advertisement