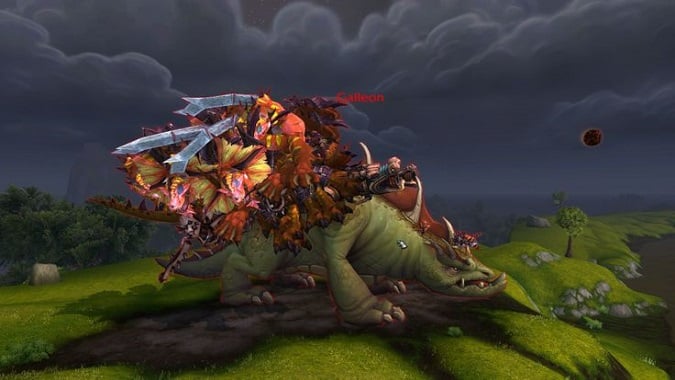 For a guild alliance to work, the guilds have to be compatible. The same applies to officers and their guild members. This week we have two situations where compatibility is an issue: a guild member expresses concerns about an unproductive alliance and another wonders what to do about an officer with some… odd policies.

band3g2 asked
How do you calm a guild of people who are all frustrated with the state of the raid team? We have been losing players rapidly since the start of brf, and at 2 months in, we didn’t have enough people to raid. We eventually joined another guild that was having similar problems to form on unit across 2-3 guilds (and 2 realms). They are way more casual then us and we had to drop from heroic to normal for all but the very end of brf.

When 6.2 dropped we had a big swell of our players and we have the numbers now that we could split, but they wouldn’t be so lucky. Now in hfc, our group has completely stagnated, we have been stuck on normal gorefiend since week 3. Now our numbers dropped again and we need the other group to raid, but with a very few exceptions, they are straight up bad, and we can only compensate for so much.

No one wants to leave the other group out to dry, but we aren’t getting to progress because of them.

This is a great example of a guild alliance that never should have been. When the teams are so different in terms of progression and skill, this type of outcome is common. Unfortunately, the officers doubled down on it in Hellfire Citadel instead of calling it a failed experiment and moving on.

It’s a situation that’s bound to breed resentment between the two groups of players. Your guild is frustrated with the lack of progress. The other guild probably feels singled out for the lack of progress and stressed that they can’t perform the way your guild wants them to. No one is happy.

If you want to salvage the raid team at this point, you’ll need to get proactive about helping the other guild to improve. You could assign mentors by class/spec and offer them assistance in terms of talents, glyphs, rotation, etc. Keep in mind that some issues aren’t necessarily related to min-maxing, but the way the player actually controls their character (clicking spells, keyboard turning, and so on). Some could also be missing the right addons.

Some players thrive after someone takes the time to coach them. Others will reject any advice or become insulted that you’re trying to “tell them how to play.” Thus, it will be a good idea for the officers of the two guilds to talk about it before making the offer to coach. Establishing boundaries and best policies will be key. Violating them will create additional rifts between the guilds, so sticking to the script is essential.

The good news here is that you have players willing to raid. If you can help them improve their skills, they could become better contributors instead of (as you imply) warm bodies.

As I said, not everyone will accept that help and some players will learn more slowly than others. Some of the players in your own guild will reject the idea and call the other guild “hopeless.” But it’s worth a shot. It’s better than wasting time wiping to Normal bosses, anyway.

If the other guild as a whole won’t accept your offer or suggestions for improvement, then you should cut ties. At that point, it will be clear that you have vastly different approaches to raiding and the alliance will never be anything but hamstrung and dysfunctional.

If they accept your help, try to be patient with them. We have a long wait for 7.0. There’s no hurry.

That’s the takeaway that the officers need to reinforce right now. We all have nothing but time to learn fights, master strategies, and progress through the tier. Taking the time now to help some struggling players could pay off big time in the long run. Hellfire Citadel is going to be our raiding home through the rest of 2015, and likely the winter and the spring too. You’ll get through it, one way or the other, by then.

smackydafrog asked
What should one do if they have an officer who likes to gratz himself, refuses to listen to anyone’s opinion about gearing because he ran sims and has a spreadsheet for us to use and insists that everytime someone gets an achievement all guild members online must give a grats and even goes so far as to say it for his own achievements? Gms seem to encourage this behavior.

Grats’ing his own achievements? That’s a new one to me. Bizarre…

I’m not really a fan of forcing people to be social in this way. Let people grats what they want to grats. I wouldn’t want a bunch of guildmates grats’ing my achievement just because the rules say they have to. It makes me think of the congratulations lines people sometimes have immediately after wedding ceremonies. You feel obligated to do it, and it’s just a little awkward for everybody.

However, as long as the guild leader encourages and supports this, there isn’t much you can do. You can have a one-on-one conversation with the guild leader about it if you have strong feelings on the topic. However, he or she isn’t likely to change opinion on guild policy based on such a conversation.

As for the gearing issue, that’s not a matter of opinion but math. If you think this officer is wrong about gearing, fight math with math! Show him the numbers. Keep in mind too that simming DPS is very difficult in this tier. The combination of the legendary rings, the class trinkets from Archimonde, the unique trinkets like Mirror of the Blademaster, and the tier set bonuses is making theorycrafters’ heads spin.

In the end, this may not be the right guild for you. Ask yourself if the fun you’re having with other guild members is worth the aggravation caused by the officers. Those two should at least balance out. When aggravation tips the scales, you should consider finding a different guild. WoW is ultimately supposed to be fun. If you’re not having fun, then it’s time for a change.