Legion pre-patch is nearly upon us, Demon Hunters to follow 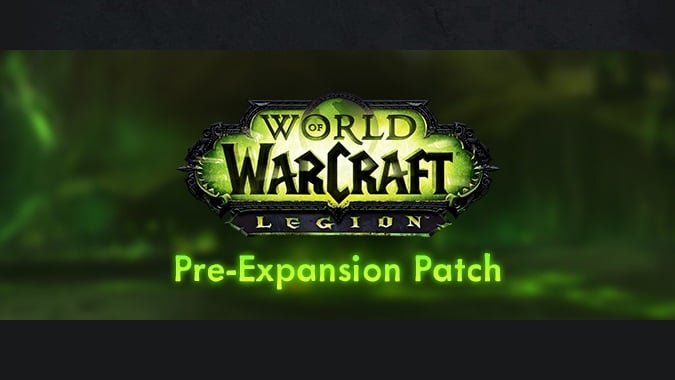 While it may not be a surprise given the recent background download that started on the Battle.net launcher, it’s just been made official: the Legion pre-patch is upon us. While there is still no official date, Blizzard has just posted a heads-up blog to let players know what to expect in the coming weeks. Perhaps the biggest news is the reveal that Demon Hunter early access — which can be gained by pre-purchasing Legion — will begin “around the second or third week of August (no later than August 17 globally).”

Of course, Demon Hunters aren’t all that are coming. The pre-expansion patch will also features the new Wardrobe system (a Blizzard Watch favorite), class changes for all, the pre-expansion invasion events (which will be rolled out in waves), and more. For the full blog post, join us after the break.

The skies over Azeroth are growing darker. . . .

The Legion pre-expansion patch is coming soon, and we wanted to give you a heads up about what to expect—and when you can expect it.

This update will include a wide variety of features and content that set the stage for the expansion, including system changes, quality-of-life improvements, and major in-game events. Some of these features will be available immediately, while other content will be unlocked in the weeks leading up to the expansion’s launch. Read on for more details.

When the pre-expansion patch initially goes live, players will be able to immediately access many of its key system-related features. Some of these major updates include:

Transmogrification Updates
The new Transmogrification Collections system will make it easier than ever to collect, store, and sort through the gear you want to use for transmogging—without taking up storage space in your inventory, bank, or Void Storage. As you collect items that can be used with the system, you can browse through them—as well as sort by class or slot—in the Appearances tab in your Collections interface.

Class Updates
We’re making some significant changes to classes and their specs for Legion to further strengthen their identities. The core changes to spells, talents, and more are going into effect as soon as the pre-expansion patch goes live. For more information on what’s new for each class and spec, read our earlier class preview blogs.

We’re also making it easier to switch between specializations for different content. Players will be able to queue up for dungeons, raids, Battlegrounds, or Arenas as any role that is available to their class, while continuing to play as another role while they’re waiting. When they enter the content they’ve queued for, they will automatically switch to the suitable role upon entering (at no cost) and then switch back automatically when they leave the instance.

The March Toward Legion

In the weeks following the pre-expansion patch, we’ll be unlocking even more content that leads into the August 30 launch of Legion. We’re still determining the exact timing of these events, but players who pre-purchase Legion can expect to be playing a Demon Hunter around the second or third week of August (no later than August 17 globally).  We’ll share more details in the weeks ahead, but here’s a look at what’s in store:

Burning Legion Invasions
Before all hellfire breaks loose upon the Broken Shore, the Burning Legion will begin its assault upon Azeroth, turning some familiar stomping grounds into demon-infested battlefields—and it will be up to the heroes of the Alliance and the Horde to face the onslaught.

Demon Hunter Early Access
In the weeks before launch, those who have pre-purchased Legion will get early access to the new Demon Hunter class. Players will begin at level 98 and will find themselves on the fel-shattered expanse of Mardum, where they’ll play the Demon Hunter starting experience before joining their allies in the fight against the Legion.

The Battle on the Broken Shore Begins
As the situation grows more dire, Azeroth’s heroes will begin their first foray onto the Broken Shore—the epicenter of the demonic invasion.

All of the features and content listed above (save for Demon Hunter early access) will be available to all World of Warcraft players, regardless of whether they’ve pre-purchased Legion.

My guess is that the pre-patch arrives July 19th — but this being Blizzard, there’s always the chance last-minute surprises could delay things. Still, I’m incredibly excited for the patch. I’ve tested the Wardrobe on the beta and my character gained more bag space than I know what to do with. Not everyone may be a transmog collector, but my guess is this ends up being a lot of people’s favorite feature. Outside of the Wardrobe, though, what are y’all looking forward to most?