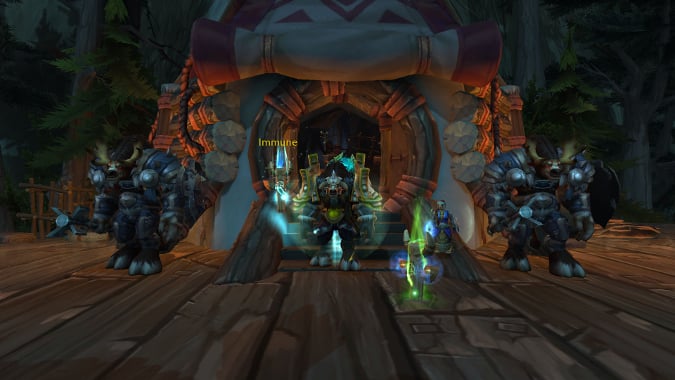 When it comes to experiencing the world soon to be unveiled in Legion, we Shaman get to experience everything it has to offer with little to no need to slow down. With our ability to kill things from afar quickly plus our solid sustain and control, we can call down the vengeance of the elements on our enemies without any fear or retaliation! While we can be overwhelmed, we have a wide range of tools at our disposal to overcome any challenge the expansion has to offer.

Like the rest of the classes, our specs have gotten tweaks that we’ve been talking about for several weeks now, as well as a revamped talent tree to make selections from. There are plenty of viable talent options for each spec, and today I’m going to give you my recommendations for the most useful builds for leveling and questing in Legion as well as patch 7.0. 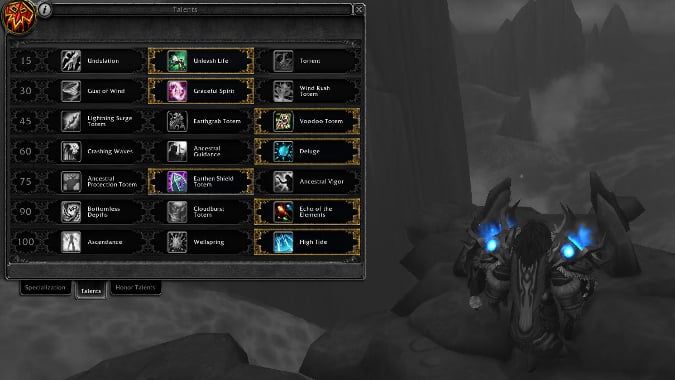 Level 15: This tier is all about healing boosts. Unleash Life is a familiar friend, and one I feel that it’s the best choice here here — but Undulation and Torrent are both solid talents too. In both instances and solo questing we rely more on our single target heals Healing Wave and Healing Surge to keep ourselves alive, or keep a wayward tank or DPS’s health from bottoming out. But having that healing boost be something we can control rather than Undulation’s “every third cast” gives us burst when we need it and direct control over our healing output.

Level 30: This is another tier where everything is almost equally useful. However, I think Graceful Spirit, is little bit above the rest. The reduced cooldown on Spiritwalker’s Grace, plus increased movement speed in SWG and Ghost Wolf‘ are all things that have come in incredibly useful. Several of the instance encounters are large areas and being able to move quickly and heal is pretty key. There are also several creatures in the world that we may need to make tactical retreats from while healing.

Level 45: For my money I believe Voodoo Totem gives us the most bang for our buck. Hex is absolutely invaluable when trying to control the outcome of a fight and mass hex is that much better. Earthgrab Totem and Lightning Surge Totem are both solid, but Voodoo Totem buys us the most time when dealing with packs of mobs. Consider that spawn rates tend to be tied to player counts in the area, so we’ll be navigating through some heavy masses of enemies. I think this is our best bet.

Level 60: Deluge became my go to pretty quickly when grouping up for quests or instances. the 20% additional healing on Chain Heal when a target is standing in Healing Rain or has Riptide active is great, but it’s also controllable. We can place healing rain or riptides to make the most of Deluge’s healing bonus, which can make a big difference in the outcome of a fight. Ancestral Guidance and Crashing Waves are both solid talents, but I feel for grouping and instances Deluge really takes the cake.

Level 75: Earthen Shield Totem is my favorite of this tier. I really like the fact that it’s an AOE effect that you can control the placement of — plus it offers decent damage mitigation, if for small amount of time. This is useful for keeping ourselves alive, but in a group you can toss it into melee to keep them alive and stable while ramping up healing. Ancestral Protection Totem is too niche for leveling and Ancestral Vigor, while strong, is slightly outclassed until you reach a point where you can heal constantly without worrying about mana consumption.

Level 90: This is, in my opinion, the hardest to choose from. Echo of the Elements I think edges out the others because not only does it help us heal, it helps us DPS. Having a second Lava Burst available as a healer when questing is absolutely invaluable. It also gives us a second Healing Stream Totem and Riptide to use as well which useful whether you’re soloing or running dungeons. Cloudburst Totem is also an incredible talent, but I feel it will do best at the end game when we’re running more group content.

Level 100: Each choice here is geared towards group content, but I feel High Tide is a little more valuable for leveling. Wellspring has incredible positional requirements, and coordinating that with folks that we aren’t used to can be difficult, making it problematic if you’re running LFGs or doing world quests with a random group. High Tide gives you a little more wiggle room in that regard — you’ll be able to put out healing without the need to yell at folks to line up Wellspring. Ascendance is also good, but while leveling I prefer to have an always active modifier versus a cooldown. 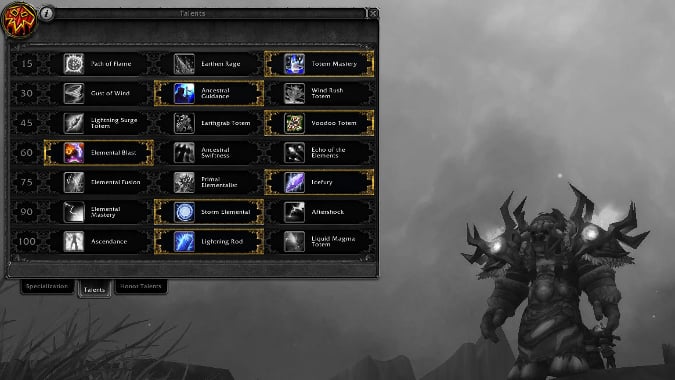 Elemental: When you really need something to be on fire

Level 15: Totem Mastery is my favorite of the bunch here. The four totems it creates are absolutely invaluable and offer a lot of utility that can help make up for lack of gear or stat deficiencies while leveling. The extra Maelstrom, extra trigger chance on Elemental Overload, Flame Shock damage increase, and extra haste are all welcome buffs. The Earthen Rage and Path of Flame talents are both good, but Totem Mastery pulls ahead of the pack while leveling.

Level 30: Ancestral Guidance is my pick for the extra group survivability it offers. Some of the instance encounters can be brutal while leveling, and healers will be thankful for any help we can give them (without sacrificing our DPS to heal). This is also very useful when encountering quest bosses or zone elites with a pack of players. Gust of Wind and Wind Rush Totem are both fun, but I feel we get more out of Ancestral Guidance.

Level 45: Voodoo Totem is the choice here, just as above. We simply get the most out of it utility wise while leveling.

Level 60: Elemental Blast is my choice for a couple of reasons. First, it’s an additional damaging spell at our disposal. And second, it increases a stat for 10 seconds at a time when we use it. Having additional Crit, Haste or Mastery is fantastic. Ancestral Swiftness is good for the flat haste buff, and Echo of the Elements is solid for the additional Lava Burst, but I feel we get more out of Elemental Blast while leveling up.

Level 75: Icefury has won me over the last few weeks. Not only is it a damaging spell, it also buffs Frost Shock allowing it to do additional damage while giving us a great Maelstrom dump. This allows us a little more control when out in the world as that slow can buy us enough time to kill something before it reaches us. Primal Elementalist is still very useful if we want to have totem pets active and Elemental Fusion will likely be our strongest option at max level, but for leveling having that extra damage and control baked into one spell sequence is pretty stellar.

Level 90: Storm Elemental takes the cake here for me. Not only do we get an awesome looking companion that will help light enemies up, it also generates maelstrom for us. This is incredibly useful when dealing with elites or end of quest chain bosses and speeds things up enough to be noticeable. Aftershock I think will be more useful at max level, while Elemental Mastery is a little lackluster for leveling.

Level 100: Lightning Rod feels pretty good while leveling. There are a lot of elites and quest bosses that summon packs of mobs to assault you, plus with mobs being packed together and respawn rates likely to be high, we’ll be pulling extra mobs at times. Being able to keep dealing damage on the big bad while handling trash mobs with Chain Lightning is very useful and can help keep you alive and questing instead of corpse running.

Those are my leveling picks based purely on what I found the most useful in my endeavors after leveling a grand total of six Shaman to max level. While these probably won’t be the best talents for end-game, they’ll help you leveling up that alt before Legion — or get your main to max level when Legion arrives. Your mileage may vary depending on your playstyle, but I think this is a good place to get started.

What are your thoughts on our new talents? What do you think will be our most useful ones while leveling and then at max level? Elements watch over you friends, see you on the Broken Isles!