The Queue: I am not Alex 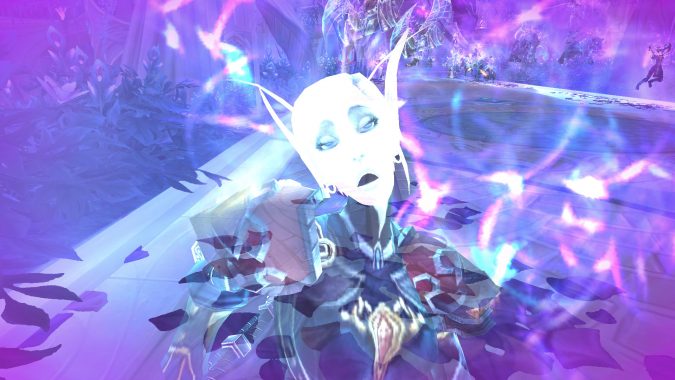 Hey, hi, hello. Last week, Liz may or may not have murdered me and left me a ghost to haunt the spooky wilds of  Mitch Watch. In my spooky search for revenge, I may or may not have haunted Alex and scared him away from the site. Because of these strange and spooky events, I am now Alex for the week.

KHADRYN PUTS EVERYONE ELSE TO SHAME:

I just dinged 110 on my priest by picking a Fjarnskaggl. Most epic ding ever, or MOST EPIC DING EVER!?

Look, the real question here is, what spec were you when you did this? It’s certainly an epic ding, but to be the most epic ding ever, you had to have been Shadow.

Fun, only-kinda-related story: When Mists came out, I was (as usual) grinding for server-first Priest to reach level cap. The final grind from 89-90 was brutal at release, and I ran out of quests. I ended up getting help from some guildies, who sent me items you needed to make the alchemy trinket…but I wasn’t near a mailbox, so I hearthed and wound up getting server-first 90 Priest in Orgrimmar outside the inn. It doesn’t match hitting cap with Fjarnskaggl, but it was definitely one of my more notable level-cap-hitting moments.

RC THE ICE QUEEN HAS A HUNCH…

Since I’m kinda new to mythic+, can someone just confirm my suspicion. Are you only able to get one mythic keystone a week?

It was answered in the comments, but for visibility: You get one mythic keystone from your first base-level Mythic* of the week. That keystone works for a specific dungeon, chosen randomly from Legion dungeons (excluding Violet Hold). If you complete that dungeon within the time limit, it will become a new keystone for a random Legion dungeon. Depending on how fast you complete it, the keystone will upgrade between 1 and 3 levels of difficulty.

If you ever don’t beat the time limit, your keystone becomes “depleted” and stays tied to the same dungeon. You can un-deplete this by running the dungeon again within the time limit, but no matter how fast you go, you will not get any loot at the end.

*If you’ve completed a Mythic+ dungeon one week, the following week will reward you with a keystone in the chest located in your Order Hall. This keystone is not the same level as your highest-completed Mythic+ but does increase the higher the Mythic+ completed the week prior. It’s easier to follow once you’re used to it, but a bit complicated for those just starting Mythic+ runs.

ALVILDA THE AROUND? DID A THING.

This is not a question, but your hair looks awesome and I just wanted to give you a shout-out as well as the Mitch Seal of Approval™ on the new look.

FALLANGER HAS A LOT OF QUESTIONS, BUT I CHOSE TO ANSWER THIS ONE:

Question N°4: Is Genn a traitor for disobeying Anduin’s orders?

Are you referring to Stormheim? If so, no, he’s not a traitor.

Genn’s order were, essentially, to not attack unless “the situation demanded it.” I suspect Anduin gave this order sincerely, but if he wants to be an effective leader, he’ll need to learn how to give an order with less wiggle room. Had had told Genn to not engage the enemy no matter what the situation, Genn would have been in direct violation of an order from his king. But that’s not what Anduin said, and Genn took advantage of that.

Granted, Anduin is probably not in the mindset to lead the entire Alliance, so I do feel for him — but Genn is a soldier with a vendetta. Under a different king, his actions would have either been unofficially sanctioned by way of mutual understanding, or they would have been more clearly defined as treasonous from the beginning. Genn technically didn’t disobey Anduin; rather, he found a loophole.

ENO SHOULD PROBABLY HAVE SOMEONE MAKE SURE HE’S OKAY:

What happens when you eat poisonous mushrooms?

BRUIN THROWS ME A TOUGH QUESTION, BUT I FACE IT HEAD-ON:

Patron here. Does anyone watch you guys level? Could that money go to something more popular? Like the Tmog article that was defunded? I have NEVER clicked on that, and I’m sure others feel like me too. Hopefully that feature doesn’t cost you guys much. Sorry if this seems salty, I just watched the news.

I am not sure how much the leveling stream nets, to be honest. When we’re live, it seems to pull in ~75-100 viewers, though I’m unsure about how many watch them later on.

More to the point, though, the leveling stream (at least to me) is more a chance for us to get together and have fun playing the game. We chat a lot, in a podcast-esque fashion, and get a chance to experience the game as a full-fledged 5-man group. It’s hard to say what the “cost” of it is, because it kind of just costs time for us. Again, I don’t have the numbers, so please don’t quote me on any of this (Alex or Adam can probably give more specific answers), but I think this is one of those things that we come together to do as a sort-of bonus.

As far as the transmog article, that was something I personally volunteered to spend my free time putting together. No, it wasn’t unpaid volunteer work, but it was still something I approached the editors about doing, not the other way around. It was meant as an experiment from the beginning, and it ended up waaaay not being worth the cost/time. To compound that, I was offered a full-time job a few weeks into suggesting we do this, and that made it more difficult to maintain. It was cool, and I enjoyed doing it, but transmog sharing generally seems to just work better when you guys share with each other as you please.

THE LAST CHRTH IS GETTING A PHONED-IN ANSWER FROM ME:

I think someone asked this before, but does Anduin know that Bolvar is the Lich King?

Liz and I did discuss this once before and we sort of came to the conclusion that, er, maybe? Officially, we don’t know, and unofficially, it would have to be word of mouth that broke the news to Anduin. They’d seemed pretty adamant about keeping what happened after the Lich King’s fall a secret, but who knows. It’s unfortunately a bit unclear, especially because players and apparently all Death Knights know about Bolvar’s New Groove.

ELIZA HAS A GREAT QUESTION:

Is there any indication that the mounts we’ll have available from each Class Hall will be permanent additions to the game, or just available during Legion? I really can’t imagine the latter, but Blizzard does make the occasional poor decision.

Technically, I don’t think we have any indication, no. There aren’t a whole lot of mounts in the game that are limited-time only, though — off the top of my head, the PVP mounts come to mind, but there are very few others (Scarab Lord mount and the original epic mounts, for example).

To be honest, I don’t think Blizzard has cemented a plan with these. They’ve indicated that Artifact appearances may be usable post-Legion only if you earned them during Legion, but it’s hard to say if the same will apply to these mounts. With the Warlock green-fire quest, you were given an account-bound title if you obtained it during Mists, but the green fire itself can still be earned now. If anything, I imagine a similar system will be in place for the mounts.

TL;DR: Probably permanent, may have a FoS tied to them for earning during Legion, but we ultimately don’t know what Blizzard plans to do.

All right, I think I’ve talked enough. Queue hosts are all over the place this week, so be sure to leave your generic, anyone-can-answer questions for the next writer, and I’ll see you again on [REDACTED]!

Blizzard Watch is made possible by people like you.
Please consider supporting our Patreon!
Filed Under: #MitchWatch, Queue, The Queue
Advertisement