For the roots of the divide between the few remaining High Elves and the Blood Elves, we must go back to two figures — Kael’thas Sunstrider and Garithos, self-proclaimed Grand Marshal of the few remaining Alliance forces in the region after Prince Arthas Menethil’s betrayal of his father and his kingdom to the Scourge.

If not for the ‘Grand Marshal’ and his odious, Humanity first racism, the Sin’dorei might well have remained in the Alliance. Whatever Kael’thas’ ultimate faults, he was clearly in the right on every single dealing he had with Garithos. He endured insolence and contempt from his putative ‘ally’ that would have driven almost anyone to rejection. It’s not that the Elves were spotless in all this, rather that the Human they were dealing with was so utterly awful.

To explore Kael’thas’ life before the Scourge would take longer than we have. A member of the Council of Six in Dalaran (making him an Archmage and a peer to Antonidas) as well as the son of King Anasterian Sunstrider of Quel’Thalas, Kael’thas was powerful, accomplished and self-assured. He viewed the Orc internment camps as a mistake, viewing the Orcish lethargy after their defeat as proof of their weakness as a people, not worth preserving. His attraction to Antonidas’ young pupil, Lady Jaina Proudmoore, was mostly one-sided (despite Jaina acknowledging his magical skills and near-perfect looks) as Jaina at the time was a very young Human already in love with someone else.

Kael’thas’ rival, Prince Arthas Menethil, would soon transcend such pretty slights as taking the woman he coveted, however. In what must have seemed the blink of an eye, Arthas would go from romantic rival to the destroyer of Kael’s entire life. Kael abandoned Dalaran to its fate when he heard the news that Quel’Thalas had been attacked. He arrived home to find a shattered kingdom, a corrupted Sunwell, and a terrified and in some cases resentful people. He had, after all, been gone for quite some time attending to his duties as a member of the Council of Six and thus was not there to aid in the defense of his homeland.

He was forced to say goodbye to his father, assume command — although he refused to call himself King, saying that Anasterian was still his people’s king — and then deal with the Sunwell. He selected a small band of his followers to aid him in sealing it before the corruption Arthas introduced to it could destroy his people entirely. While the essence of its magic was saved by the dragon Krasus (unbeknownst to him) Kael did save his people from the corruption, but at the price of severing their connection to the font of magic they’d grown utterly dependent on.

Thus Kael’thas, who believed the Orcs weak and worthless due to their lethargy in the camps, would see that lethargy visited upon his own people. Desperate for a way to save them, he made the infamous ‘Sin’dorei’ declaration and created the Blood Elves. 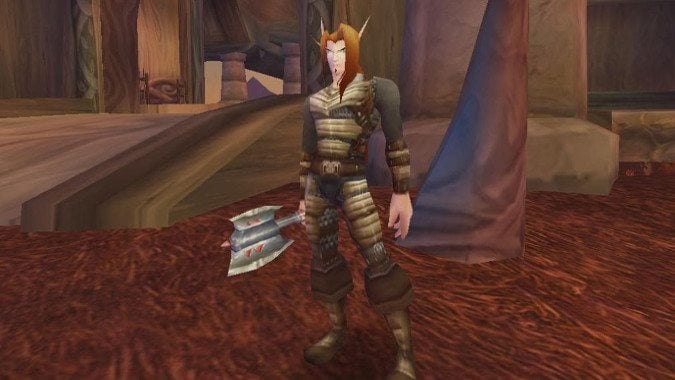 While Kael was taking these steps, there were communities of High Elves outside of his control. Not all Elves had shared Anasterian’s view of the Alliance as a useful means to discharge his debt to Anduin Lothar and nothing more. Besides the high quantity of such Elves that lived in Dalaran, there were lodges of High Elves in Lordaeron, the Hinterlands and even Loch Modan, living among Humans and Dwarves who they saw as allies. There were even a relative few High Elves who had remained loyal to the Alliance following Anasterian’s withdrawal from it, working alongside its forces.

These elves were not spared the ravages of the Sunwell’s loss. Cut off from Silvermoon as they were, they were forced to find other means to deal with the addiction. Many of them were so far south from the kingdoms of Quel’Thalas and Lordaeron that by the time they understood what was happening, it was too late for them to do anything about it. 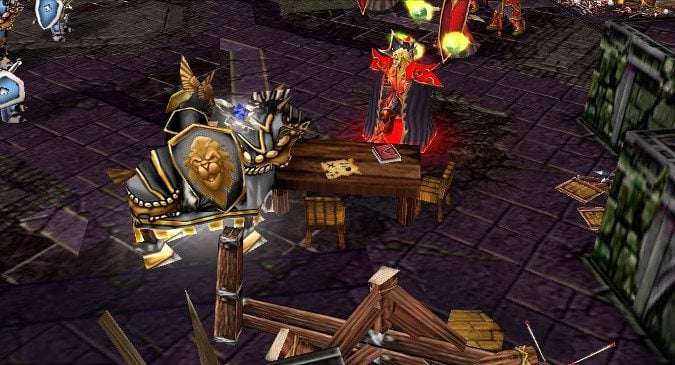 There’s really not much good one can say about Othmar Garithos. Son of a baron, he blamed the High Elves for the deaths of his family and the people of his home village during the Second War, as they died when Orcs burned the town of Blackwood on the border to Quel’Thalas. Once he got the chance to pay the Elves back for this, he took it.

The bare facts of Garithos’ actions will have to suffice here, as there’s simply not enough space or time in this article to cover all of them. Cut off from Stormwind, Kul Tiras, or any other Alliance nation, his forces were the only Alliance ones Kael’thas could make contact with. While the Prince led his people into working alongside these forces, Garithos hated and distrusted Elves. His racism was born from distrust just as much as Anasterian’s had been, but where Anasterian merely sought isolation from his neighbors, Garithos wielded the power he had like a tyrant and deliberately set Kael and his people the riskiest jobs, not so secretly hoping they’d fail and be further damaged or even destroyed.

This ultimately led Kael into an alliance with the Naga under Lady Vashj, who was willing to help her ailing Sin’dorei ‘cousins’ when Garithos would send them on missions that would likely get them killed. Garithos then used this as a pretext to arrest Kael’thas and his followers — allies from a sovereign allied state, no less — for treason, and imprisoned them in Dalaran’s dungeons.

Garithos’ contempt, racism and pre-emptory treatment of Kael’thas soured the already shaky relationship between Sin’dorei and Humans, and confirmed Kael’s growing negative view of the Human people. Each side resented the other, the Elves anger at Arthas’ actions and the Humans at the Elves abandoning them before the Third War broke out. To Kael, Arthas was as Prince a model for the Humans he dealt with, and Garithos only served to prove his point. They could not be trusted. The death of his father, the destruction of his homeland could be laid at Humanity’s feet, and even after trying to work with them he and his people were locked away in Dalaran and left to die.

It’s no surprise that Kael accepted Vashj’s offer to join forces with her and her Naga in service to Illidan, since it meant escaping a world where his people were on the verge of extinction, their bodies wracked by pain as their growing withdrawl pangs made them suffer. He led many of his people to Outland, eventually sending his close servant Rommath back to Quel’Thalas to help the Elves remaining there reclaim their home after he seized control of Tempest Keep and the Naaru M’uru.

His people were given a new source of power to draw upon, and, in time, although Kael had no idea it would happen it was his choice of sending Rommath and M’uru back to Silvermoon that would ultimately reignite the Sunwell and save his people. By then, however, Kael had fallen too far to be saved himself, driven by the burden of his people’s plight to ally himself with the Burning Legion.

The Legacy of Division

At present, most High Elves existing outside of Quel’Thalas are survivors from Theramore (Jaina had quite a few High Elves living in her city) or the lodges in the Hinterlands or Loch Modan, (the Lordaeron lodge, Quel’Lithien, has been destroyed) or survivors of the Alliance Expedition on Draenor who were shielded from the events on Azeroth by living in the Allerian Stronghold. These Elves didn’t experience the full horrors of the Scourge Invasion and in some cases were still living and working among Humans and other Alliance races and see themselves as part of the Alliance still.

The Sin’dorei, on the other hand, see the results of their people’s alliance with Humans as (at best) a mixed bag. While yes, without Humans their kingdom would have died out during the Troll Wars, it’s hard to argue against Arthas and Garithos as examples of the negative aspects of Humans, and many Blood Elves want nothing to do with their former ‘allies’ considering the horrible cost they’ve paid. And this split is magnified by different ways of coping with the addiction to the Sunwell.

Before the re-ignition of the Sunwell, the High Elves learned to cope by abstinence. The pangs of their loss remained with them, but they could learn to endure and in time no longer feel so horribly weakened and debilitated by the lack of the power they’d once felt as an intrinsic part of them. But the Blood Elves who learned from Rommath had taken to draining power from demons and even the Naaru M’uru, and their former cousins saw this as an abomination.

This divide can be seen today on Quel’Danas itself, in the Sunwell chamber, where Captain Auric Sunchaser represents the High Elves in an uneasy truce with their Sin’dorei cousins. Or in Vereesa Windrunner’s dim view of her former brothers and sisters, going so far as to help Jaina eject them from Dalaran following the events of the theft of the Divine Bell. There is a deep antipathy between the High and Blood Elves, born from both how they dealt with the fall of Quel’Thalas and their addiction to the Sunwell and their personal views on who, exactly, was to blame for it. Many High Elves blamed Kael for abandoning his people and turning to monsters for help and view his fall as proof that the Blood Elven ways are doomed.

They cling to the Alliance as the only shelter they have against a world where they’ve lost everything, even their former homeland. Thus, the Sin’dorei hold Quel’Thalas, while the people who less than a generation ago were their brothers, sisters, parents and children now live apart from them, each convinced the other is deluded.