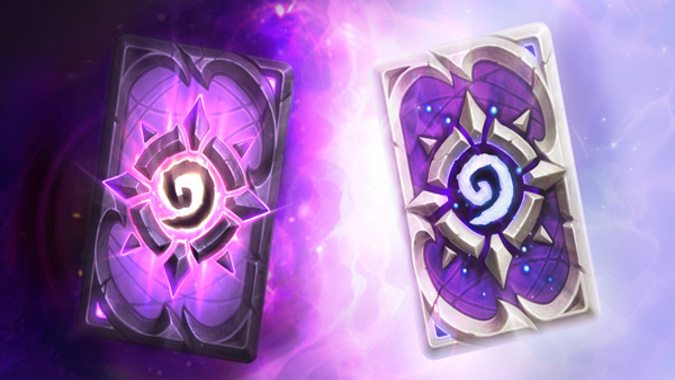 If you play Hearthstone you may be interested to discover that starting today, you can participate in Oktoberbrawl, and by doing so contribute to whether the forces of the Light or the Void end up victorious. How does it all work? Well, I’m glad you asked. Otherwise, I’d have to tell you anyway — that’s the whole purpose of this post. But it would feel slightly rude.

While you can enjoy watching Oktoberbrawl regardless, if you want to participate, you need Twitch Prime. If you don’t already have it, but have Amazon Prime, you can get Twitch Prime by linking your Amazon Prime account if you have one of those. You’ll get two special card backs, Call of the Void and Call of the Light, which let you choose which side you’ll support in Oktoberbrawl as it unfolds over the next four weeks.

Blizzard has created two teams of Hearthstone streamers — Team Void (consisting of Dog, Thijs, and J4CKIECHAN) and Team Light (Kripparrian, Reynad, and Alliestrasza). They will be playing on entirely fresh accounts, and you can help them by playing Hearthstone yourself using one of the two special card backs. The more you play, the more card packs your team of choice will get. With more cards, they can bolster their decks for weekly grudge matches every Friday, leading up to a special Twitch Finals on October 21st.

For the full details, go to the official post or read them below.

You won’t just battle on behalf of your team, you’ll get to watch the results of your efforts in action as Oktoberbrawl battles are streamed on the official Hearthstone twitch channel. Each team member will also stream their efforts to bolster their Oktoberbrawl decks (Remember: the only time they can play Oktoberbrawl decks is during a live stream!).

Watch as your favorite player opens packs on stream and strives to build the strongest deck possible, leading up to a Friday grudge match each week! The winning team of each grudge match gets to choose a penalty that will be applied to the opposing team during the finals at TwitchCon!

Each week will also be themed according to the Hearthstone expansion cards each team gains access to.

WILD WEEK – September 11-15
Weekly Packs: 10 packs each of Goblins vs Gnomes and The Grand Tournament

KRAKEN WEEK – September 18-22
Weekly Packs: 10 packs each of Whispers of the Old Gods and Mean Streets of Gadgetzan

MAMMOTH WEEK – September 25-29
Weekly Packs: 10 packs each of Journey to Un’Goro and Knights of the Frozen Throne

Each player on each Oktoberbrawl team will receive a fresh account, 10 Classic packs, and a Welcome Bundle. During the Oktoberbrawl period, on Monday of each week, each player will receive 10 packs each from two different expansions. Then on Wednesday of each week, each team member will receive a portion of a second pack award based on a percentage of total wins earned in Ranked Play by players using their team’s card back. Play for each week will culminate in a grudge match on the official Hearthstone twitch channel.

Oktoberbrawl accounts may only be played while streaming on Twitch. Oktoberbrawl team members may earn gold through quests and playing constructed games, and spend it to purchase Classic packs, but may not purchase packs in any other way. A free Arena ticket can be used, but Arena runs cannot be purchased otherwise. Players may not disenchant cards, and may only complete the 80g “play a friend” quest with one of their teammates.