Battle for Azeroth will not have traditional raid tier sets 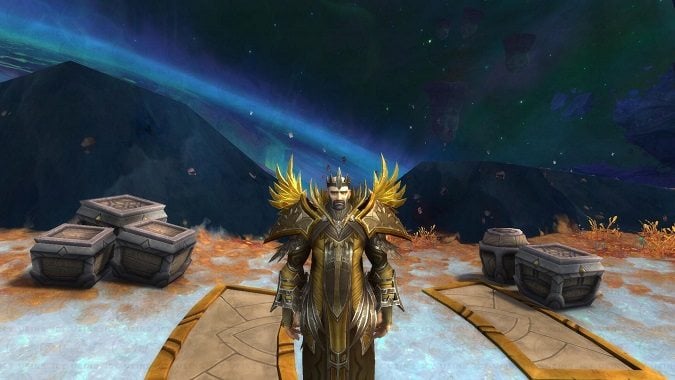 Tier sets have been a staple of World of Warcraft raiding since the game first introduced players to raiding, all the way back with Molten Core. With Antorus, we’ll be seeing the arrival of the twenty-first raid tier set — which will apparently also be the last traditional tier set we see.

This news comes courtesy of a Game Informer interview with Ion “Watcher” Hazzikostas, who says the team will use the new Azerite system as a replacement for traditional tier bonuses. You can see the full quote below, which raises a few questions about how raid armor will work in the future:

So we’re going to have artwise, the gear will be more heavily themed from the place it comes. There’s more customization we want to express through the new Azerite system. I think class sets have changed a lot over a years of World of Warcraft. Back in the day, these 8 piece sets you would put together over the course of 6 to 8 months raiding a zone, where now the smaller sets and so many more sources of gear, it’s very common to get 2 or 4 pieces at the start of a tier and it actually kind of locks down those character slots, it limits your choices. It feels like more of a drawback than a strength at this point.

The biggest question I have here is if the gear that’s “more heavily themed from the place it comes” will still have variants for every class, or if we’ll see armor-type variants instead (i.e., one set for all clothies, one for leather-wearers, etc.). Granted, not having class-specific armor sets doesn’t necessarily pigeonhole the art team into only one set per armor type, but it still makes me wonder how it’ll all come together visually.

My hope — although this would be pretty difficult to pull off — would be to have multiple “sets” (art-wise) that all still work together on a visual level, regardless of if you’re using one piece from Set A and one piece from Set B. More than that, however, is the hope that the new approach doesn’t mean less variety in appearances from the raids in Battle for Azeroth. Even if I don’t always like the look of the tier sets, I still always enjoy seeing what the art team comes up with for them all.

On a mechanical level, I appreciate this change solely for the fact that it sounds like I won’t be stuck with a piece of tier gear from LFR that’s 20 item levels below a non-tier piece that’s just taking up bag space. This doesn’t happen with every set, but Tier 20 for Shadow Priests has an incredibly strong 4-piece bonus, which has meant holding onto tier gear far below the item level of my other gear. Sure, the overall DPS might be better keeping the lower-item-level tier gear, but it still doesn’t feel great keeping a Titanforged piece of non-tier in your bags to collect dust.

The one reservation I have regarding this change is just how much customization it will actually open up, and how that customization will manifest itself or be unlocked. Will we still have to earn tier-bonus-like Azerite effects through raiding? Will there be too much customization, thus necessitating constantly changing bonuses to fit the situation?

Obviously, it’s all early in the entire process, and we’re not even in public alpha yet, so this could all change. It sounds like a positive direction to take tier right now, but the specifics could make or break it for players. I guess for now, we’ll just have to wait and see.

Blizzard Watch is made possible by people like you.
Please consider supporting our Patreon!
Filed Under: Azerite, Azerite Armor, Battle For Azeroth Tier Gear, Tier 22
Advertisement