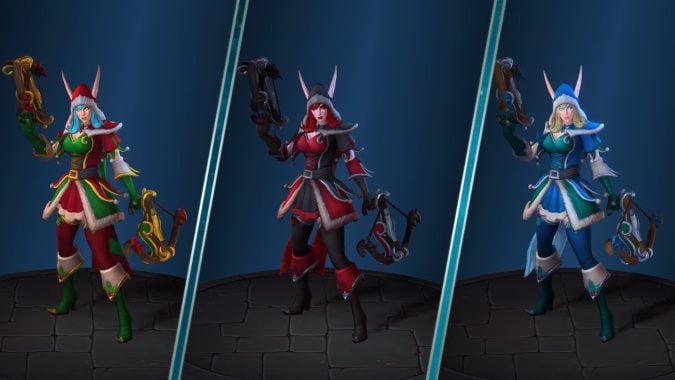 We received a sneak preview of the Winter Veil skins coming to Heroes of the Storm when the 2018 Gameplay Update hit the PTR a couple weeks ago, but the latest In Development video provides a clearer look of what Winter Veil will bring to the Nexus. Along with new skins (and numerous tints) for Malfurion, Valla, Malthael, and Kharazim, the upcoming patch also includes a pretty fantastic gingerbread mount — including a moldy variant.

I’m generally not too big on sprays (summertime flings aside), but the animated gingerbread sprays around the 2:00 mark in the video are fantastic — especially half-eaten Genji begging for healing. Gingerbread Johanna is adorable, too. And the gingerbread Abathur, and the Garrosh, and…you get the idea.

Hanzo’s skins and tints are included in this video as well, but considering he was first announced a month ago at BlizzCon, he isn’t exactly the new hotness anymore despite not even being in the game yet. But were we ever excited about Hanzo? I mean, ever? Even for a minute? I’m way more hyped for elf Valla than elf Hanzo, that’s for sure.

Blizzard Watch is made possible by people like you.
Please consider supporting our Patreon!
Filed Under: Hanzo, Malfurion, Valla, Winter Veil
Advertisement