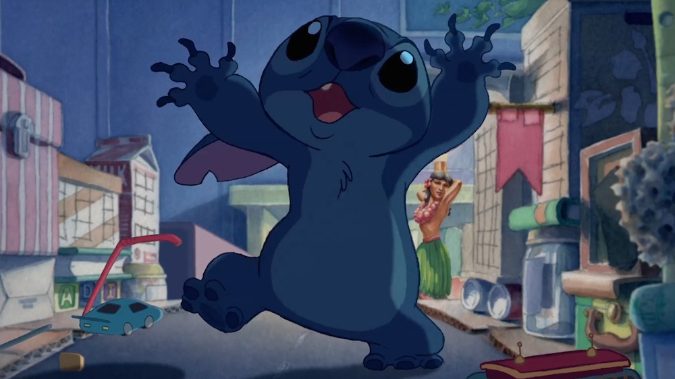 Absolutely unbelievable. Mitch has never seen Lilo & Stitch, which is a complete travesty.

Ah, and if you weren’t following yesterday’s Queue comments, you have no idea what I’m talking about. Sorry about that. But let’s get on to answering some actual video game questions… though I do go off on a Disney tangent at the end. (Just scroll to the bottom if you don’t care.)

Onward to the Queue!

Fellow Queuemans! Quick question:
Patch 7.3.5 is enabling “scaling” everywhere now. Right? Please keep you helpful answers simple for a guy like me.
Scenario: I run a level 100 in Hellfire Peninsula, and all the NPCs change level from 58-60 to 100?
/salute all
For Azeroth … the way it used to be.

Note: I run two level 100 alts in Outland and Northrend because it is a cakewalk. Plus, I like the nostalgia and totally soloing dungeons and raids that were so hard “back then”.

For those of you who haven’t had a chance to jump into the game (or the PTR), here’s what you need to know: level scaling isn’t a fixed absolute. In the case of Outland and Northrend, the zones scale from level 58 to level 80, so level 100s won’t immediately get crushed by Outland’s friendly neighborhood Fel Reaver. (And, similarly, if you pass through Elwynn Forest, you won’t be stomped by Stormwind’s friendly neighborhood Hogger.)

Rachelle wrote up a good rundown of the level scaling system for anyone looking for more details.

Q4tQ: Do I *need* do have the achievements to unlock the allied races on each respective faction or my Alliance char can unlock the starting questlines to my Horde ones (and vice-versa)?

Nope! The unlocks are account-wide… and though Blizzard could change this, account-wide achievements unlocking things are pretty common these days. So keep working on reputation and achievements on whichever faction you happen to be further along on, because those unlocks will work for both.

Wowhead has a handy calculator if you aren’t sure how close you are to unlocking your Allied Race of choice.

Q4tQ: Would an early release of the Allied Races not also include Blizzard adding those extra character slots per server? I for one am quite unwilling to delete any of my characters on my main server, not with them all at 110 and decent artifact skin progress.

I know this isn’t exactly an answer, but I’m pretty confident that this is how Blizzard will have to do it.

Q4tQ how am I supposed to make time for wow with my new switch?

This is the ultimate question of  gaming life. There are so many games but only 24 hours in every day. But I think it comes down to a pretty simple question: are you having fun? Late in an expansion, even an expansion with this much content, can start to drag. If you’ve run through all the story quests (though there are some new ones with yesterday’s patch), you’re currently mired in a long grind for gear and AP. Or maybe you’re working on collections, achievements, ranking up in PVP, or getting through more difficult raids. If that’s fun… keep doing it! Case closed!

But the lure of other video games is strong. I personally have a pile of unplayed single-player games and I’m behind on current WoW content. (Plus my to-read list is getting really excessive.) I kind of want to do all of it but… dang, finding the time is tough when you have a job and a family and plenty of other real life obligations. So we’re down to prioritizing, and I think that is purely based on what’s most fun for you.

Maybe you feel like you have to put in a certain amount of time in WoW (and some of us have guild obligations), so you keep logging on even when you aren’t having fun. I say: don’t. We all only have so much free time in a day to game — and that time is rare and valuable. Do what is most fun to you.

O4TQ in the past i have played Alliance first and then horde side to get that side of things. In Legion i did not because doing all the class weapon/mount quests gave me everything of the story. With BfA my assumption is to do both sides again. How do you all feel about that plan?

Legion definitely focused on classes… but Battle for Azeroth seems primed to focus on factions. And Legion’s epilogue cinematic (which just came out yesterday, so don’t click if you don’t want spoilers) suggests exactly what the BlizzCon introduction cinematic suggested: that each faction is going to have its own journey through the expansion.

I’m pretty sure this is going to result in a much shorter to-do list for most of us. In Legion I felt compelled to play through as many classes as possible because each one had a unique storyline. I definitely haven’t finished them all, but that got pretty tedious with all the dungeons you had to run again… and again… and again… to finish those class stories. In Battle for Azeroth, it looks like you’ll be able to see everything with one character of each faction, if you want to see everything.

QftQ: What’s your favorite Disney era and why?

I know you probably want an actual answer here, but I just don’t have one. Each era has its own qualities, and there’s at least one movie I love from all of them… though, as an adult, a lot of my favorites are based on art style.  Snow White and Dumbo had beautifully delicate animation that I miss in modern 3D stories (and even newer animated features, which have their own style). Cinderella and Alice are a clear refinement of that early style, bringing some of that same magic, and Sleeping Beauty may be my favorite as both a child and adult The animation is beautiful with a style unique to the film, and the story hits every note: it’s scary with a tremendously good villain, it’s funny with the rather comic fairies (who manage nonetheless to be heroic), it’s romantic (and the prince actually has a name this time around). It does everything!

Admittedly… I can’t come up with anything I’m a particular fan of in the bronze age, but I feel the “dark age” Basil of Baker Street is tremendously underrated (and, come on, it has Vincent Price).

Then you have the renaissance, where every movie was beautiful, though Little Mermaid was always a childhood favorite. Though by the end of this period I had reached an age where Disney movies weren’t “cool” anymore and drifted away. (I now realize that it doesn’t actually matter what everyone else thinks is cool, but there was a time when I made a vague attempt to fit in with others. These days I just accept the fact that I’m a nerd.)

Stitch is absolutely the highlight of the experimental era, with a unique animation style an unusual story. It is my go-to movie to put on whenever I’m having a lousy day. I’ve probably watched it more times than I’ve watched any movie, period. (And I think Mitch would probably like it if he could be bothered to watch such cinema classics.)

And though I miss the old-school animation style, today’s revival is packed with great films. 3D animation has come a long way, developing a style that’s gone well beyond chunky 3D blocks. (Just look at the original Toy Story to see the difference.) I’d say Tangled is the most beautiful princess movie Disney has ever made, while Wreck-It Ralph, Big Hero 6, and Zootopia  are some of the best, most original stories Disney has done in years.

And that’s it for today. Please be sure to fill the comments with questions that go beyond discussing your favorite movies so Anne doesn’t kill me.

I’ll see you next week, by which time I hope we’ve all managed to convince Mitch to watch Lilo & Stitch.