Twenty-five thousand years ago, a lone craft, the Genedar, lifted away from the surface of Argus. Within it lay a tiny hope for the future. The Draenei, exiled ones in their language, the last uncorrupted Eredar in existence. The craft was sent by the Naaru to lift the Prophet Velen and his people away from their untimely deaths at the hands of their former friends, allies, even families as the message of Sargeras spread over the planet’s surface. While Kil’jaeden and Archimonde succumbed to the lure of power and knowledge, Velen saw the truth. Those who followed him into the stars believed in his cause.

Some chose to fight for it. One ship became two — the Genedar, a refuge ark for those who were seeking a new home, and the Xenedar. The Xenedar was no refugee ship. It was not fleeing Argus’ fall. It was a warship. From it would come the kernel of the Army of the Light, the Lightforged Draenei. Today, after untold thousands of years, their war has at last ended. The Legion lies defeated, Kil’jaeden and Archimonde destroyed, Sargeras imprisoned. But the Lightforged have not retired — they are soldiers and they recognize when war is on the horizon. Led by High Exarch Turalyon and Captain Fareeya, they’ve dedicated themselves to the defense of a new world, and their own long-lost kin. 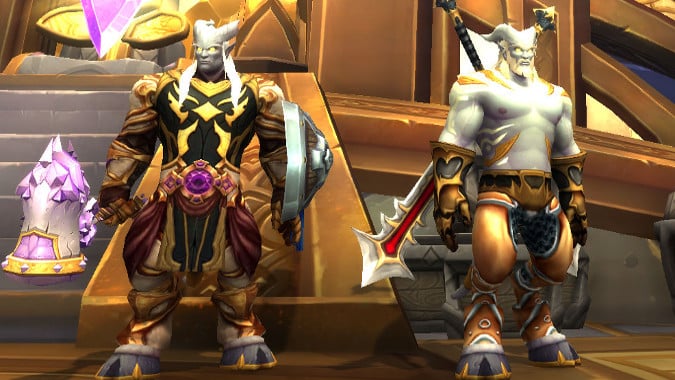 Lightforged Draenei start off as Draenei. Calling them a ‘race’ as such is debatable. Each of the Lightforged you saw on Argus or on the Vindicaar wasn’t that much different than any Draenei. The difference comes in a ritual. But before one undergoes the ritual, they must prove themselves worthy to undertake it. Not all who seek to become Lightforged survive the trial. While the ritual isn’t limited to Draenei — Turalyon undergoes it during the audio drama A Thousand Years of War — it’s rare that any but a Draenei should undertake it. The vast majority of the Xenedar’s crew were Draenei who sought to fight. They wanted to bring about the end of the Burning Legion.

The ritual itself requires the Lightforged to enter the Forge of Aeons. When taking part in the rite as T’Paartos’ second, Alliance players are seemingly transported to a Draenei village in Zorammarsh.  This indicates T’Paartos may not have been one of the original Xenedar crew. Instead, he may be a descendant of those who led aboard the Genedar and ended up on Draenor. This suggests that some of the Lightforged are probably Draenei from Draenor who arrived on Argus via the Exodar.

The Forge of Aeons forces the prospective Lightforged to face their fears and their own inner darkness. Failure can be fatal. But those that survive are tested and assured — they have looked at their own darkness and overcome it. The Light remakes them as instruments of its will, with the blessing of its power. The Eredar and their Draenei exiles are long lived, sometimes staggeringly so. Prophet Velen has lived for over 25,000 years. But the Lightforged are functionally immortal beings. They are no longer touched by age. 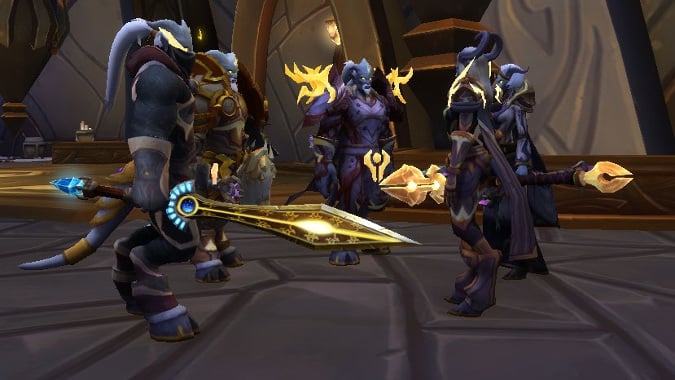 A history writ in Light

The original core of the Army of the Light chose to travel with Xe’ra and fight the Legion. It’s difficult to say exactly how much time has passed for them. Turalyon and Alleria experienced a thousand years with the Army. Meanwhile on Azeroth, two decades or so passed. The Twisting Nether changes the speed at which time passes for those within it. The Lightforged have been fighting the Legion for many thousands of years. The battle on Argus was the ultimate battle in their campaign.

No one else can be said to have maintained so long a battle in the face of an overwhelming Legion force. Without the forces of the Army of the Light, Azeroth would have lost its battle with the Legion. But the inverse is also true — without the aid of the tenacious heroes of Azeroth the Army of the Light would have failed. Argus would have been their tomb, as it was the death knell of the Eredar culture that preceded the rise of the Man’ari. The Draenei fled Argus because their own people chose to destroy themselves. The Lightforged are the battle-hardened survivors who chose to fight a hopeless war for thousands of years in defiance of the Dark Titan himself.

It’s not a surprise that the Lightforged chose to join the Alliance. While both factions fought against the Legion, the Lightforged view Velen as a Prophet as much as the Draenei do. The fact that they seem to be recruiting from Draenei ranks indicates that those bonds of kinship remain strong. To the Lightforged, all Draenei are their people. They see themselves not as a separate race, but as a protective shield. A force of soldiers that fights so what’s best about their kind can survive the horrors of forces like the Legion. 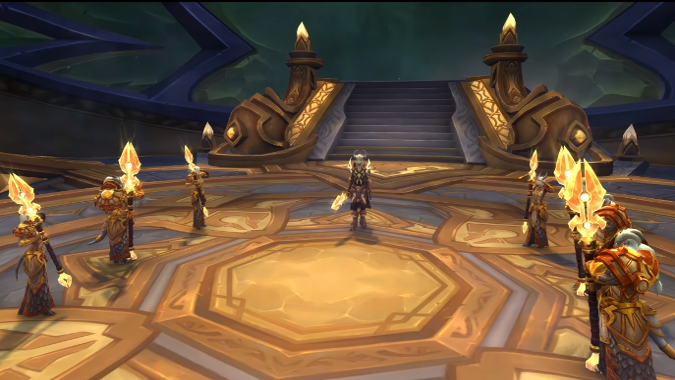 Now that the Legion is defeated the Lightforged find themselves on a new world with new allies. As soldiers, they report to a chain of command that ultimately ends with High Exarch Turalyon. Between Turalyon’s place as an Alliance hero, and the presence of the Draenei, it was almost inevitable the Lightforged would choose the Alliance. Hearing what the Draenei suffered on Draenor at the hands of the Old Horde likely wouldn’t have done much for their relationship with the new one, either. Interestingly, the Lightforged ride Elekk mounts that were introduced to them by Turalyon and Alleria during that thousand years of war.

Now that the Legion has been stopped, the Lightforged reside not on the crashed Xenedar — it was left behind on Argus when the portal between worlds closed — but instead high above Azeroth on the Vindicaar, where they serve the ship as crew. Other races have grand capitals, but only the Lightforged have a craft in orbit around the planet itself.

The Lightforged are a fascinating addition to Azeroth. Within their ranks are some of the most battle tested veterans in history, and any new recruits will have to live up to their exacting standards. They are immortals, immune to aging, and they can channel the Light in destructive ways others can not easily conceive of or match. They bring with them the resolve necessary to stand against hopeless odds and fight on past the point where they should have been defeated, even when fighting an unwinnable battle against a vastly superior force.

And they bear the touch of the Light with them wherever they go. Now they shine that light forth, bringing hope to their new allies and preparing once again to fight to defend them, as they have since Argus fell twenty-five thousand years before.