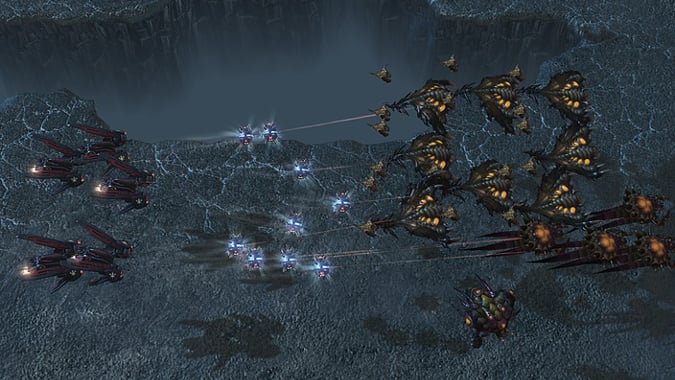 StarCraft 2 currently has a couple of balance changes in testing to address some of the game’s current competitive pain points. First, to address Protoss feeling pigeon holed into one early game playstyle when up against the Zerg, they’ll be changing the Zerg unit upgrade causing the situation:

We received feedback that Protoss early game options are currently limited in the Protoss vs. Zerg matchup due to the potential of very early Zergling drop builds. Protoss players were having trouble holding off these early attacks without the help of a Stargate and thus gravitated towards opening with a “safe” Stargate in most games. So as to open up the early game for Protoss players, we’ll looking to change the Overlord’s “Mutate Ventral Sacs” upgrade requirement from Evolution Chamber to Lair.

Next, the developers are attempting to shift what has become the de facto endgame strategy for the Terran faction. Terrans have become increasingly reliant on Ravens for the bulk of their army’s power, despite Ravens being intended as a support unit to augment a larger army’s power. They’ll be shifting power out of Ravens and into Vikings, hopefully making Vikings a more viable asset to an army.

Next, we’ve been seeing a lot of games where Anti-Armor Missile spam becomes the determining factor in the late game in all three Terran matchups. The Anti-Armor Missile is intended to combo with core units such as Marines, Marauders, Liberators, and Cyclones—not to be massed purely for damage, as is currently the case. Thus, we’d like to reduce the damage of Anti-Armor missiles to reinforce its intended function.

At the same time, since Terrans are currently relying on the Raven for their late-game power, reducing the Anti-Armor Missile’s damage would help rein that strategy in. We think this would provide a good opportunity to give Terrans a bit more late-game help in the form of a buff to the Viking.

Vikings are often perceived as being weaker in the current metagame than they were before, partially due to recent changes to other races. We’re proposing a health buff, from 125 to 135, which will not only change the unit’s relationship against anti-air ground units and late-game air units, but also against area-of-effect spells commonly used against them, such as Parasitic Bomb and Psionic Storm.

These changes are currently available for testing and could go live as early as March 19.

So far, the response to these changes from Terran players isn’t altogether positive. The Ravens have been perceived as the only viable lategame unit in their repertoire. First impressions suggest the minor buff to Vikings isn’t going to help. So far, the most common piece of feedback is a request to redesign the Battlecruiser’s function in StarCraft 2. In Brood War, the Battlecruiser was a viable late game unit due to being slow-firing, yet hitting like a truck. The StarCraft 2 iteration fires rapidly, but each shot deals less damage — thus armor is a far more effective counter against Battlecruisers than it was in Brood War.

Essentially, Ravens were being used to fill the niche that was once filled by Battlecruisers. The buff to Vikings could create new strategies for Terran endgame, but players seem to long for what they one had, not what they could have.

And in news related to Brood War, the patch for StarCraft Remastered that was meant to introduce the 20th anniversary rewards has been delayed. Currently, there is no ETA for its release.

We’ve run into an unexpected issue while preparing to deploy patch 1.21.4 and will need to delay its launch. Because of this, the SC20 console reward will not be available until we push this patch. We’re hard at work to get these issues fixed as soon as we can and we’ll update this thread when we have more information to share. Thanks for your patience!

In terms of delays, delaying your own 20th Anniversary celebration is pretty rough. Hopefully the developers can sort out their hurdles sooner rather than later.