The story of Rann Dawnbringer, Archmage of the Alliance 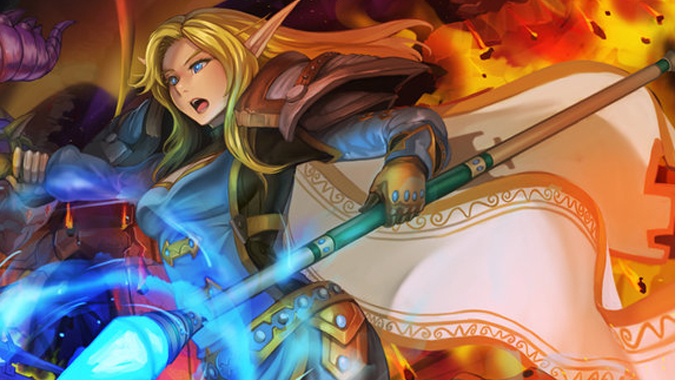 This character profile has been written for Rann, one of our supporters. If you enjoy it, you can check out the other profiles we’ve written, too!

Rann Dawnbringer was never particularly good at choosing sides. Or more accurately, there were far more interesting things to concern herself with.

Born in Tranquillen, she displayed enough raw magical talent at an early age to be sent to Dalaran to study. And study she did: what followed was a blurry kaleidoscope of lessons and books, words, and spells. She was perhaps not quite as accomplished as the vaunted names in the annals of Dalaran’s esteemed history, but she was more than good enough to get by. But she was removed from the comings and goings of the world at large, and keeping up with news from the forests of Quel’Thalas was a distant second to her studies.

That reverie of study and introspection was interrupted by pleasant interactions with her fellow mages. One in particular saw fit to quietly charm her with both wit and intelligence – perhaps the two would even have wed one day, were it not for the wars. Rumors from afar spoke of an undead menace sweeping across Lordaeron unimpeded. And one fateful day, Archimonde rose from the scattered sands of a summoning circle to crush the city in the mere blink of an eye. When the dust settled, Rann found herself struggling through the ruins along with everyone else – or nearly everyone else. Her beloved was gone, lost somewhere beneath the rubble of the once-great city.

All that was left to do was rebuild. And so she did. Word of Quel’Thalas’ fate reached her, as did her the fate of her parents, who — thankfully — lived on. So did Rann, and when Dalaran at last lifted to the skies and took to Northrend, she went right along with it. There, she graduated from student to teacher, passing on the depth and scope of her magical knowledge to bright minds that reminded her of herself, not so long ago. But eventually news of the world outside Dalaran’s walls proved too interesting to ignore. She left, returning home to a kingdom that had changed dramatically in her absence.

Her old home in Tranquillen had seen better days, as had her parents. Although they gladly welcomed her return, others were not quite so pleased to see her. Where once had been a bright society of High Elves now remained a more withdrawn, beleaguered force of relentless survivors, fierce yet forlorn sets of eyes awash in emerald green. Blood Elves, they called themselves now, for the blood that was shed – for the bloodshed and brutality she missed while away in her magical city. It was a fact that many were keen to point out with all due scorn and resentment.

Despite her people’s reticence towards her and their new affiliation with the Horde, Rann continued to carefully walk the line between both factions. Dalaran was known for its neutrality, and she reflected that neutrality almost as second nature. But when her people – for they were still her people, despite their alliances – came under the watchful eye of Hellscream and his harsh demands, her allegiances shifted. Neutral she may have been, but there was no way she would side with a warlord. Her Alliance connections came in handy during this time – when Lor’themar began considering a change of alliances, she was consulted as a point of contact for a possible switching of sides.

Ultimately, the deal fell through. These days, although Rann keeps in touch with her family, she considers the Alliance her home. She still teaches, albeit in smaller capacity – a private tutor, rather than full professor. And all her years of study and dedication have finally been rewarded with a promotion to Archmage. Though the fate of Azeroth is ever in peril, Rann toes the line as best she can, with all the grace and cleverness she can muster. She may not excel at choosing sides according to some, but when it comes to sheer survival, Rann considers herself an expert.