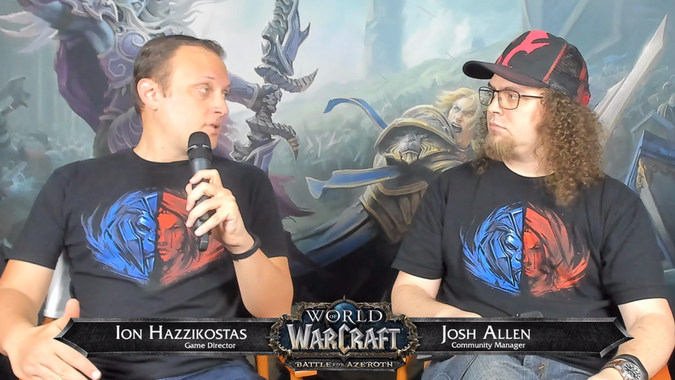 Warcraft Game Director Ion Hazzikostas and Community Manager Josh Allen did a Q&A today to address everything from balance hotfixes, scaling issues, and Azerite gear being locked to whoever looted it. He also touched on the reasoning behind the recent change that broke addons that people used to do World Quests.

A major reason behind the change was the feeling that having that level of automation was turning most of the addons into an auto complete button. Players would get to the area, push the button and have a quest done in twenty seconds. Great for players, but not very social — and Blizzard wants there to be a greater emphasis on making groups and tackling the objectives as a team. The reasoning behind the removal of auto-accept for all groups — except for the biggest and baddest targets — was to try and limit people who were taking advantage of group makers to change server shards. This was a pretty annoying issue back in Legion where you would see players join your quest from the other side of the zone looking for mining or herbalism nodes.

They briefly talked about making addons like that part of the base game, to ensure that everyone had the same kind of play experience. But making that change would lead to a different set of issues, as players would spend most of their time just traveling from quest to quest. When you spend a minute on a flight path getting to the objective and only five seconds completing the requirements for the quest, gameplay has just become a taxi simulator. The other downside would be that if every world quest was designed for a large group of players, the rewards would have to get worse, or the objectives would have to get bigger. Either way players wouldn’t be happy.

I understand that Blizzard is trying to ensure the game is played in a certain way, but as players we should have the option to play how we want and quest how we want. The reasons given for the addon changes weren’t stability reasons like I initially speculated, but rather gameplay reasons. If I only have a short amount of time and want to get some quests done, I’d rather not spend extra time mucking around in the finder looking for groups that might not even notice my application.

Then there’s the problem of scaling. Blizzard carried all of the scaling tech they debuted in Legion forward, so as soon as you hit max level everything starts getting tougher. Scaling can make world quests punishing — particularly for solo players — which made these addons particularly useful. While the gear rewards get stronger, sometimes the time investment hasn’t felt proportionate, leading some players to take off gear and leave it in the bank. We’ve also seen buffs to both Arms Warriors and Feral Druids, who were struggling with dealing AOE damage. I know that while questing as a Feral Druid, if I pulled more than a pair of targets I would need to have cooldowns ready to go or I’d be in a world of hurt. Other tuning is still coming for classes — Shadow Priest and Elemental Shaman both need some love.

There are some addons out there that come close to replicating the old World Quest Group Finder, like World Quest Party which has a setup that lets you quickly find groups when you arrive at a new quest. Just be careful not to hit that leave group button too quickly if you’re in a dungeon.

Some players prefer an easy grouping tool. They might not be in a guild or don’t want to feel pressured to do a lot of content all in a row. Other players might be having a tough time with the content by themselves. Whatever your reason for wanting to group for questing you should have the tools available to make it as smooth as possible.