What does your ideal Heritage Armor look like for your race of choice? 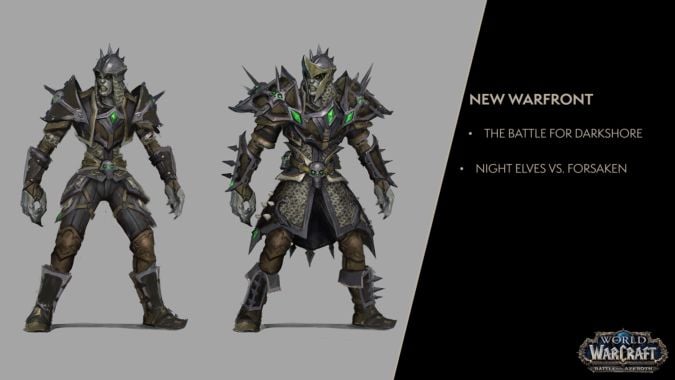 Earlier this week, Ion Hazzikostas revealed a whole heck of a lot of information about upcoming World of Warcraft features. One such feature was Heritage Armor for the original races. Of course, by “original races,” I don’t mean all of them — not for now, anyhow. Patch 8.1 will introduce Heritage Armor for Blood Elves and Dwarves. For players of those races, that’s good news! You guys get Heritage Armor before the rest of us.

But that doesn’t necessarily mean it’s bad new for players of the other races, either. I mean, if Blood Elves and Dwarves are getting their Heritage Armor in 8.1, it seems safe to say Blizzard is set on a look for those. But the rest of us? We get to imagine what Blizzard might have in store — heck, we could potentially even change the course of Blizzard’s design iterations with our musing!

Or maybe not. Regardless, we still have some time to share ideas and throw out design wishes of our own before we see how close or far to our dream Heritage Armor sets our imaginations were. As such, now is the perfect time to do some good ol’ fashioned group thinking and discuss just what sort of armor would be the best Heritage Armor for the races whose sets are yet to be.

The above Forsaken armor set looks like it would be some pretty awesome Heritage Armor — but it also looks like it could be the armor set rewarded for Horde players who partake in the upcoming Darkshore Warfront. After all, as a Forsaken player, it does seem a bit jarring that our Heritage Armor set would look so much like a mail set. I’ve always pictured our Heritage Armor as cloth or leather. That said, I’m also totally okay with the above set because it still manages to embody the Forsaken — dark overall, some green tints, and not weighty enough that Forsaken couldn’t actually wear it.

But I’m curious — what does your ideal Heritage Armor set look like? What race is it for, and what armor type does it most closely represent? Our there certain colors or emblems it must have? Or are you perfectly content letting Blizzard come up with a creation before you ponder such things? Let me know in the comments!

Blizzard Watch is made possible by people like you.
Please consider supporting our Patreon!
Filed Under: Battle For Azeroth, BFA, Heritage Armor, Patch 8.1
Advertisement