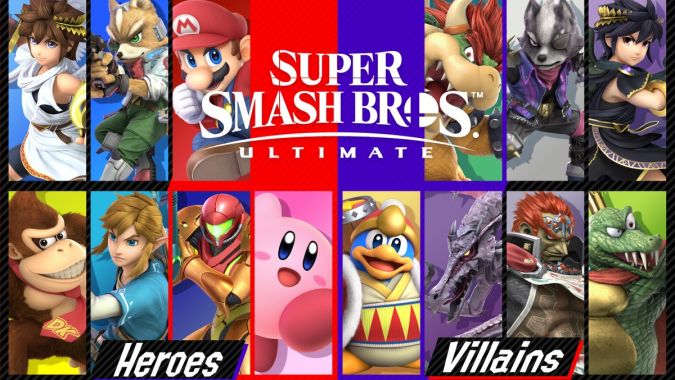 Y’know, my gut instinct when I first saw this month’s Splatfest was to go with Team Villain. Makes sense, right? I’m evil, etc. etc. — but then I looked at the actual list of characters on each side. Link, not surprisingly, was on the heroes side, however.

Link is my main.

So, I went with Team Heroes, and it… well, we didn’t win. And now I’m thinking that I should’ve just counted Dark Link — who is not an Echo Fighter like Dark Pit is — as Team Villain and called it a day with that decision.

Oh well. I suppose we should Queue.

Q4tQ: The most recent Splatfest was Nintendo Heroes vs. Villains. Which team would you fall into if we applied the same question to WoW? For simplicity sake we’ll say any “morally gray” faction leaders are just anti-heroes and on the heroes side. Me, I’d go team villains immediately. All hail N’Zoth!

Team Villains. In WoW, it would never have even been up for debate. Praise Yogg!

KALCHEUS HAS A TINFOIL HAT ON:

Q4tQ: Do you think Blizzard deliberately released the first three “weeks” of the 8.1 Campaign when the patch dropped, or was it an accident?

I believe it was deliberate. In the past, Blizzard tested events with an increased speed on the PTR and then it wound up feeling bad when it hit live slower (looking at you, Broken Shore). Given how much Blizzard has said they wish 8.1 had come earlier, and the timing of the holidays, I’m pretty confident this was intentional.

DEMIDAEMON, I HOPE THIS DOESN’T OPEN A CAN OF WORMS…

QFTQ: This kind of came up in a thread in the last queue, but are there any characters in WoW that you dislike based on their core personality traits? The discussion I was in was about Tyrande and her motivations and actions regarding Darkshore. Personally, I have never liked her as a character, and find her character flaws, particularly her pride, to overwhelm her positives. Thoughts?

Hm, I don’t know if my hatred for Malfurion stems from his actual personality traits, to be honest. Sure, some of those are involved… but it’s not strictly based on his personality traits. I hate the whole damn package when it comes to Malfurion.

I’m sure some people here would probably pick whatshisface from Pandaria, but I can actually see why he acts the way he acts. We basically came to his home, ignored his warnings, and mucked everything up as a result. Then we mucked it up a little more.

So I guess my answer here has to be… OH! Turalyon. I respect him as a figure in the story, but I personally can’t stand the dude. He’s written well, acted well, and creates an interesting dynamic with others. I just plain don’t like him.

Other Q4TQ: I started my Rogue as Assassination since that’s all I’ve ever really known but should I try out Outlaw? Is it good for leveling?

I would honestly say give both Outlaw and Sub a try, then see which of the three specs you like most. I went Outlaw for Legion, but otherwise have stuck with Assassination since Burning Crusade. So Assassination gets my vote, but Outlaw is very different, so it’s worth at least seeing, in my opinion.

Q4TQ: What is the Void Elves void portal racial thingy for exactly / when do you use it? I started leveling my first Velf yesterday and I couldn’t figure out how to use it. It doesn’t really work as a mage-style blink and it’s not like the Warlock or Monk spells either since it lasts like 2 seconds.

It’s been a while, but my favorite use for the Void Elf racial was as a way to put solid distance between myself and an enemy. The trick is to use it in one direction (e.g., East), immediately run in the opposite direction (West), and then reactivate it at the very last second. This’ll get you as far East as possible, while your enemy is stuck well to the West of you.

Granted, this’ll probably help some classes more than others — I always found Mind Flay particularly useful here — but it’s the best use I’ve found for it. Total fake-out move.

MISTAH JAY, I CANNOT ANSWER ALL OF THESE:

Q4AnyoneWhoHasReadLovecraftStuff: Am I the only person who seems to think there aren’t any actual Old Gods and such in the Lovecraftian Universe since whenever people see Eldritch stuff, we find out they’ve read stuff from the Necronomicon beforehand and thus perhaps it’s just people filling in a gap where none may exist (like people who see conspiracies everywhere who also watch Alex Jones, etc)?

Also, Orphea needs a Girlycard (Alucard from Hellsing Ultimate as a girl) cos why not?

I have no answer to the first one, but Knaifu all the way. Doesn’t matter the context. Knaifu wins. Agree on Orphea, even though I don’t know what you’re referring to there either.

TKC, I HAVE BAD NEWS…

Q4tQ: does the Mitchking have the Hive Mind mount yet? Because…. tentacles!

Ugh. I wish. I haven’t had the spare time to get it since it was discovered (a whole handful of days ago). That or I just wasn’t feeling up for that level of play. Regardless, I don’t have it — but it’s on my list of things to do during the holidays.

Hey, @MitchFizzl, question for you. I recently finished Before the Storm. Assuming you read it, how do you feel about Sylvanas’ characterization?

Personally, I found it fantastic. It gave us a very good look at how cunning she can be and how that cunning has helped her get to (and stay) where she is. Plus, it also helped us understand her desires for her people, the reasons she feels correct in knowing what’s best for them, and even her brief unease at another potential coup forming in the Undercity.

I know not everyone feels this way, but I don’t think anything about Sylvanas’ characterization, actions, or anything else have changed in Battle for Azeroth. She’s the same person she’s always been — it’s just being put front and center now. Before the Storm is no different, though it did give us a closer, more intimate look into her mind. I liked that.

That’s all for today! Feel free to discuss whether or not Dark Link — who, again, is not an Echo Fighter like Dark Pit but is rather just a skin-color variant — should count as a villain or not.