Crucible of Storms, the game’s next raid, has had its loot tables datamined by our friends at WowH]head. This raid is coming with the release of patch 8.1.5, with two encounters and three bosses.

It seems the designers have given quite a bit of thought into what kind of effects the raid’s loot could have. Since there are only three bosses, the loot needs to be interesting or this will be just like Ruby Sanctum — a raid people skipped because Icecrown Citadel loot was good enough for the first raid of Cataclysm.

Nine pieces of loot drop off each encounter. The first bosses — The Restless Cabal — have a staff and armor. The second boss — Uu’nat, Harbinger of the Void — mostly has trinkets. Half of these trinkets are on-use while the other half are equip, but all of them have special effects. I’m not fond of on-use effects, mainly because I forget to use them in the heat of battle, but they can be powerful when used regularly.

A raid of water and shadow

Perusing the list, the Cabal has the healing and water-themed effects while Uu’nat has shadow-themed effects, some of which will have interesting visual effects. I don’t think there has been a raid where every piece has some kind of ability which wasn’t a simple stat upgrade, and this alone makes the raid worth running beyond because it’s there or because it has game lore. Plus many of us complain that finding trinket upgrades is one of our frustrations — and here is a boss with five different trinkets as loot!

The premise of Crucible of Storms is an ancient evil is under the Shrine of Storms dungeon, and the story delves into the secrets of the Stormsong zone and will give the Horde a reason to go to an Alliance zone to fight this evil. Uu’nat gets his powers directly from Azshara and N’zoth, so the raid is probably a key stepping stone to patch 8.2 and our journey to Nazjatar — the land of Naga and Queen Azshara. Let’s look at some of the loot which drops. 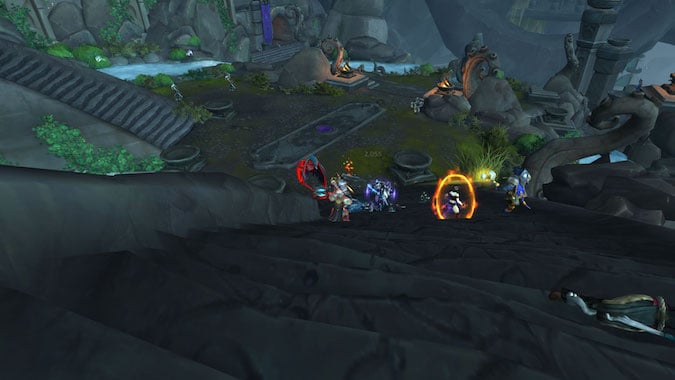 The first encounter is The Restless Cabal, which has two bosses: Zaxasj and Fa’thuul. Their loot table is mostly armor, plus one weapon, with a focus on absorption and healing effects, with water-themed visuals.

Uu’nat, Harbinger of the Void

Uu’nat was once Queen Azshara’s most trusted advisor. When she struck her bargain with N’Zoth, Uu’nat was offered into N’Zoth’s service, so you’ll find that Uu’nat’s effects are shadow-based — and a lot of them do damage to you in addition to their benefits.

These items sound very intriguing. It will be interesting to watch them in action and read the comparisons to current trinkets. Datamining shows LFR versions starting at ilevel 385. I’m currently using two trinkets with an ilevel of 390 so I’m interested in seeing how these will scale with ilevel increases. While things are still on the PTR and could change, these items show an attempt to give us more utility and more visual action. Water and shadow are an interesting combination, but all of these extra visual effects could put our graphics cards to the test.

Blizzard Watch is made possible by people like you.
Please consider supporting our Patreon!
Filed Under: Crucible Of Storms, Loot, Patch 8.1.5, Patch 8.1.5 PTR, Raid, Special Effects, Tides Of Vengeance
Advertisement