We will likely be getting the patch 8.2 PTR soon (patent pending) according to a new interview PC Gamer just published with Ion Hazzikostas, the game director of World of Warcraft.  That’s big enough on its own, but the interview covers a lot of ground: also Ion talks about lessons learned from Battle for Azeroth, how the Heart of Azeroth will change in patch 8.2, how Blizzard designs big open world content zones in the wake of the Timeless Isle and Argus, and a lot more.

The first thing I really found interesting in this interview was the discussion of the Heart of Azeroth and Azerite Traits going forward. In patch 8.2, all traits will be unlocked as soon as you pick up a new piece of Azerite gear, letting you simply pick what you want as soon as you loot the item. The progression system that used to be in Azerite gear will move to the Heart of Azeroth itself, which you will level up to earn new passive and active powers. Yes, active — Hazzikostas specifically said there will be new active ability that will “meaningfully change your combat rotation.”

I’m only cautiously optimistic about putting traits directly on the Heart of Azeroth. Now, I certainly would have been more supportive of that if the expansion had opened with it, but after seeing Azerite in action since last year I’m not 100% on board with this change. But I don’t hate it, either. Seeing meaningful iteration on the Azerite system is heartening, and oh God I didn’t mean that pun I’m sorry.

Not sorry enough to delete it, but sorry.

What Blizzard learned from Battle for Azeroth

What fascinates me here is the open admission of some of the problems Blizzard had with Azerite armor and the way the system was tested and implemented. One of those points is that sometimes, designers respond to problems that are problems, but which the player base doesn’t really grok because, well, we’re not game designers and don’t feel the issue as keenly.

In some ways, we designed the Azerite armor system to respond to what we saw as a failing in Legion Artifacts in a lot of ways. Legion Artifacts had fantastic choice and customization but it was very frontloaded. It was one of those areas that players didn’t complain about, but we saw a lot and perceived as designers. For the first two months you were making tons of choices as you were speccing out your Ashbringer or your Doomhammer or whatever else, but then for the rest of the expansion, once you unlocked those gold border traits, you were just putting Artifact Power into a linear progression that was giving you small incremental upgrades for the next year and a half.

I mean, this is spot on. A lot of us did complain about the way Artifacts scaled up. By the end of the expansion we were just dumping trillions of AP into a single ability that just made us get a bit more damage out of it. The system ran out of new choices and just ended up incrementally improving your Artifact. But I think it’s fair to say that Blizzard now understands that they went a little too far course correcting that flaw when they designed Azerite armor. Ion’s admission that they took too long to get Azerite on the PTR and didn’t get a chance to test it enough is a pretty welcome one. I remember being constantly unsure how Azerite traits were going to work, because I got so little time with them and the systems were often changing from patch to patch. 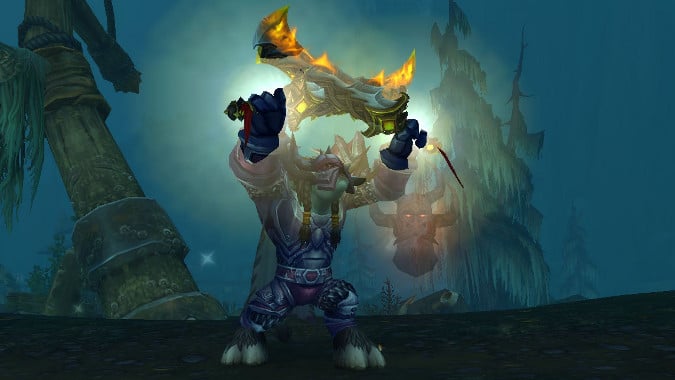 How Blizzard is moving forward from here

I’ll be honest, though, I kind of wanted to hug Ion when he said this:

We missed some important data there that would have been essential to catch this earlier that might’ve led to us making improvements before the system was live. So I think with our major progression systems, anything that we do going forward, it’s going to be an even higher priority for us to get those into players hands from some of the earlier stages of our alpha tests and early beta rather than further along the line. We can take our best guesses and we can play test, but there’s no substitute for throwing hundreds of thousands of players at an endgame system and seeing exactly what they’re going to do with it and how it’s going to feel.

In today’s world where game developers often put out statements saying nothing in particular, a direct admission that a mistake was made is rare and wonderful. I think the reluctance is understandable in many cases — these admissions get leapt on as proof that the devs don’t know what they’re doing or what have you, but a beta test for a complex MMO is itself a huge undertaking and there’s always going to be something they could have done better. It’s hard to know what a system tested as people level on a beta will look like six months down the line. Having a core of players run through content will reveal things that experienced game designers might miss entirely because they are experienced game designers. The designers see the game from the perspective of making it work and putting it all together, whereas most players are more concerned with their own goals and interests. It’s a different perspective and I think Ion is spot on here in wanting to get more of it.

There’s a lot to take in with this interview — the discussion of how the current design of flying in endgame expansion content came to be, how it went from getting it as soon as you hit max level to not ever getting it to the current state of unlocking it after a while is pretty enlightening. Ion’s closing statement discusses how the dev team has been trying to be conservative with system — and wouldn’t likely have made Artifacts at all if they’d been worried about designing for them forever. But they may have been too cautious about not adding permanent new systems because players want cool new things in MMO’s — and it’s pretty telling that they recognize it. It’s great to see them this self aware and working on new ways to provide people with the things they want from the game. People do want to see cool new things, and it would be nice to see Blizzard make more permanent changes to the game.

There’s a lot to go over in this interview — we’re definitely going to see the 8.2 PTR this month based on what Ion is saying here, and that means a lot of new content will be rolled out and tested soon. You should head over and read it.

Blizzard Watch is made possible by people like you.
Please consider supporting our Patreon!
Filed Under: Azerite Armor, Heart Of Azeroth, Ion Hazzikostas, Patch 8.2, Watcher
Advertisement