Well, some of the story of Battle for Azeroth, anyway. This is a big, densely packed expansion and there’s no way I can cover it all from both faction perspectives in one column. Honestly I have no idea how many columns it will take. But we’re going to take a look at what’s been going on so far since we now have patch 8.2 on the PTR, which means the story is about to get even bigger. So what is the story of this expansion?

Well, for starters, it’s hard to talk about the story of Battle for Azeroth without talking about what immediately preceded it. We wouldn’t be here now if we hadn’t just been there, after all. So let’s recap as fast as we possibly can before we get to the more current events.

The scars the Legion left

Recently the Burning Legion invaded Azeroth in force, bringing a more terrifying assault than the planet had seen since the days of the War of the Ancients. An enormous host of Demons led by their very masters themselves, up to and including Kil’Jaeden, stepped through the gigantic portal opened by the Warlock Gul’dan and infested the land around the former Temple of Elune we know today as the Tomb of Sargeras. A join Alliance/Horde assault on the Broken Shore of the islands where the Tomb was located made initial gains, but ultimately splintered under the weight of the Legion assault. Among the casualties were Warchief Vol’jin and King Varian Wrynn, leaving both the Alliance and the Horde under new leadership.

The Horde chose Sylvanas Windrunner as Warchief due to the last words of Vol’jin, while Varian’s son Anduin took his place as King of Stormwind and de facto High King of the Alliance. While Sylvanas is an experienced leader she has never had to command a group as disparate as the Horde before, and Anduin had never actually led at all. His adviser Genn Greymane took the opportunity to pursue a private vendetta against Sylvanas in Stormheim, leading to the destruction of a magical artifact the Banshee Queen sought in order to make her people truly immortal at the cost of enslaving the Valkyr there. This fanned the flames of hostility between the factions. Otherwise, neither Anduin nor Sylvanas played much of a role in the defense of Azeroth, leaving it up to a rag tag group of orders led by various heroes of Azeroth to stop the Legion at the Tomb of Sargeras.

A counterattack on the Legion-controlled world of Argus ultimately led to the imprisonment of Sargeras himself, but not before the archfiend drove a colossal blade into Azeroth. The wound created by that blade would have proved fatal, if the same heroes who led the push against the Legion hadn’t used their awesome Artifact weapons to draw much of the power from the sword and prevent Azeroth from being poisoned. But this didn’t prevent disaster so much as simply put it off for a while. 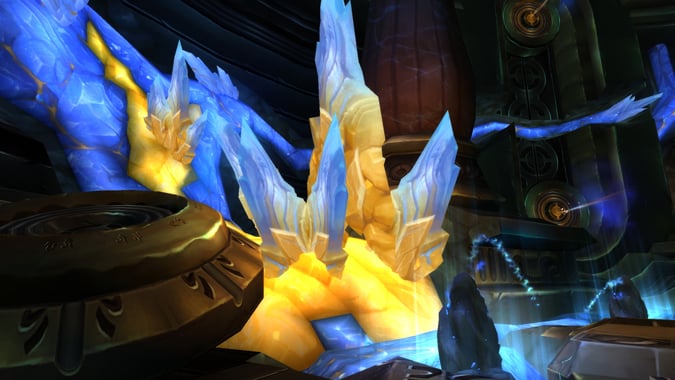 The coming of Azerite

While the slow decline of Azeroth was in and of itself a huge problem, what happened as a result of that wound was unprecedented. A substance found to be erupting from the land in Silithus after the wound was made displayed properties unlike anything seen before — except one substance. When the heroes came back from stopping the Legion, they brought with them the blood of the Titan Argus, the World Soul of the tortured Legion world. That blood and this new substance in Silithus, and soon throughout the world, were much the same.

Dubbed Azerite, it was found to impart power and ideas to those that came into contact with it. Used as a weapon, it could make terrifying designs possible. Soon, Warchief Sylvanas became aware of this new element when Trade Prince Jastor Gallywix brought it to her attention. His Goblins were already mining it from the area around the sword wound, and Sylvanas quickly saw how the substance could be vital — whichever faction controlled the Azerite would likely have a huge advantage over the other. At the same time, the Alliance became aware of the material thanks to Mathias Shaw of SI:7, who brought a piece of it to Stormwind and showed it to Prince Anduin.

Both factions quickly began trying to ensure the other didn’t accumulate too much of the stuff. A foray into a possible peaceful discussion with Sylvanas in the Arathi Highlands ended in failure — Sylvanas took the opportunity to strike down her own subjects who were thinking of defecting to the Alliance along with Callia Menethil, who the Banshee Queen saw as a direct threat to her rule. Anduin felt unable to take action against her and worsen the situation, and although Calia returned from death as a new kind of undead being, this failed conference was the last gasp of any attempt at peace between the Horde and the Alliance. From here, both factions made ready for war.

The Horde attack on Darkshore

Sylvanas ordered High Overlord Varok Saurfang to come up with a plan to essentially drive the Night Elves out of Kalimdor entirely. With Kalimdor under Horde control, the largest source of Azerite — the wound in Silithus — would be in their hands. Since Theramore’s destruction, only the Night Elves and Draenei remained in any force on the continent and the Draenei were mostly confined to their islands, while the Night Elves held parts of Ashenvale and all of Darkshore as well as their city of Darnassus atop the world tree Teldrassil.

Managing a feint that convinced the Night Elves to send their fleet south towards Silithus, Saurfang led the Horde war machine north through Ashenvale and into Darkshore. With much of their military gone the Night Elves weren’t prepared for the sudden Horde assault, and soon Horde forces penetrated right up to the coast near Teldrassil. An attack from behind even took Malfurion Stormrage out of commission before he could unleash his full power upon the Horde’s Warchief. Tyrande arrived in time to nearly kill Saurfang for it, but chose to leave with Malfurion and attempt to rally the Alliance forces.

This was a grave disappointment to Sylvanas, who had viewed the death of Malfurion as the best way to break the Night Elves resolve and drive them from Kalimdor. In an attempt to kill any hope the Night Elves might be retaining, Sylvanas ordered the Azerite-infused catapults to launch flaming projectiles that set Teldrassil itself ablaze. This atrocity cost the lives of thousands of Night Elf noncombatants who called the world tree home and destroyed the Night Elf capital of Darnassus… but if it did anything to bring the Night Elves to heel, we haven’t seen it.

Next time we’ll discuss the Alliance attack on Lordaeron, and the search for new lands and new alliances for both factions as Battle for Azeroth really begins.