The Queue: Everything is beautiful in its own way 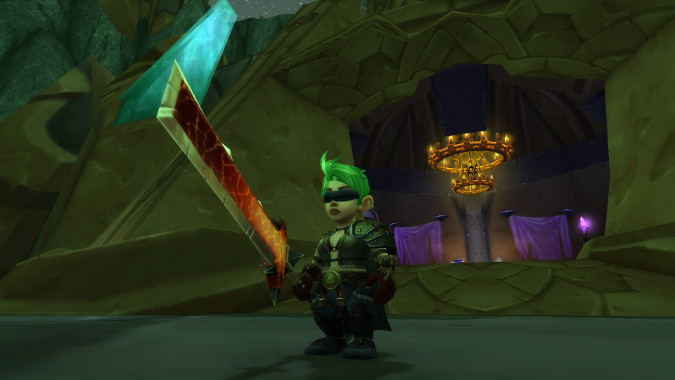 OMEDON ASKS A QUESTION ABOUT BATTLE FOR AZEROTH’S STORY

Q4tQ: Relevant to today’s earlier discussion, do you think part of WoW’s (infuriating) “cards to the vest” approach to BFA’s story is motivated by the potential for mass ragequitting when they show their hand? They literally cannot finish this chapter in a way that pleases everyone, they must know that, and yet they’d like us to please remain subbed in the meantime. They aren’t committed to the fallout until that curtain opens, and then…? I don’t know. “Classic is there for you?”

Honestly? No. Because nobody sets out to make story without the idea that they can knock it out of the park. Especially not people who’ve been doing this for as long as Blizzard has, and the story team has done some amazing work in Legion and even Battle for Azeroth.

There’s of course always a difference between personal taste and objective quality, and I definitely think that Battle for Azeroth is simultaneously one of the best made expansions ever and not really hitting my personal tastes. I think to be absolutely fair I have to admit that what I’ve seen of 8.2 actually is much more to my tastes and I’m cautiously optimistic that what they have in store, if it’s not going to please everyone, is going to please a reasonable majority of the player base.

Silly Q4tQ: Some Gnomish genius has invented the television set. What shows would you expect/hope to see? Good morning Azeroth? It’s Always Sunny in Orgrimmar? How I met your Warchief? Ms. Xal’atath’s Neighborhood?

Here is my thought for Multiple faction WoW. Horde and Alliance still exist but make peace with each other. Now horde and alliance can group and raid together, but still cannot guild together (or they can, doesn’t really matter). Each expansion we get several Factions to gain rep with, so why not make us join one of these factions, and you are now at war with opposing factions and be friends with friendly factions. Build the PvP and Battle Grounds around these split factions. So in this expansion we could have a Sylvana, Saurfang, Jainia, and Tyrande factions and you can war with the ones at odds, (i.e. Sylvana and Saurfang) and setup battles for them to fight or quests based on this split. it could be expanded beyond this but was just a thought.

I don’t know that we’ll ever see peace, as such, between the Horde and the Alliance. But I certainly wouldn’t mind some variation on what you’re suggesting here — a shift in focus away from Horde vs. Alliance and towards each faction exploring and adventuring in their own unique ways. I played Horde for years, and there was a lot to like in the rough and tumble underdogs banding together for mutual protection and defense against a hostile world that the Horde had from Classic to half way through Wrath. I would love it to see some of that element come back to the fore at least for a little while, and the idea of Aldor vs. Scryer rival factions that actually fight each other in Battlegrounds and so on seems like it could be a winner.

QfRossi: Could Blizzard Watch produce D&D Know Your Lores?
You have recently shown passion for D&D on this site. We’re not getting as many KYLs as we used to. I’ve tried to research D&D lore, but there is so much I can’t make sense of it. I don’t even understand years, or what is “the current year” in D&D.

While I won’t say no to this idea, there are many D&D campaign settings, each with their own lore. Just off the top of my head there’s Mystara, aka the original D&D ‘Known World’ featured in the old school Basic, Expert, Companion, Master and Immortal sets; there’s Greyhawk, the campaign world of Gary Gygax, one of the two main inventive forces behind D&D; there’s Blackmoor, created by Dave Arneson (who also has a solid claim as co-creator of D&D); there’s Faerun, the world of the Forgotten Realms, created by Ed Greenwood and semi-official D&D setting for years and years; there’s the burnt world of Athas, the home of the Dark Sun campaign setting; there’s Eberron, Keith Baker’s setting which feels a lot like a magical take on the years between WWI and WWII, complete with airships and magic trains and a near-civilization Last War and international tensions; finally, there’s Krynn, home of the Dragonlance adventures, novels and old school video games and I’m leaving out Spelljammer and Planescape and probably several more.

Each of these settings has lore as varied and separate as Sanctuary from Diablo and the Koprulu Sector from StarCraft and Azeroth are from each other. And much of the last two editions of D&D have been written on the assumption that it’s best to be as vague as possible and let the DM decide if they’re going to create their own setting or use a pre-existing one, so they don’t really make it clear what setting it’s all set in. You can sit down with a D&D adventure and make some tweaks for it to be set in the Flanaess of Greyhawk or Faerun or Eberron or Athas or Mystara, or your own home setting. Because of this, actually doing D&D KYL articles would be a massive undertaking.

However, I will absolutely say that I know both Anne and myself would love to be putting out more KYL’s.  Right now it’s just a matter of carving out the time.

YOU’RE ALL EXPECTING ME TO ANSWER RED WITH SOME VARIATION ON “NUH-UH, IT’S WARRIORS”

Q4TQ: why is monk the best class in WoW, that everyone should try, and why doesn’t everyone try them?

Monks have some very compelling reasons to give them a shot. The daily quest they get that buffs their gained XP can really help you level faster, they’ve got some fun abilities like Keg Smash — I will never forget the WoW leveling stream when I would just yell ‘Keg’ and destroy whole groups of mobs, even though that’s no longer so OP as it once was — and a really cool and unique resource and aesthetic. You could do a lot worse than play a Monk. Remember, they can tank, DPS or heal, making them as versatile as a Paladin and almost as versatile as a Druid. And they get cool martial arts that look boss.

Monks are pretty fun, but facts are facts. They can’t use Ashkandi.

ENO WANTS TO KNOW ABOUT SAUROK

No, it seems unquestionable that Saurok are Archosaurs, likely descended from therapod dinosaurs. The Saurok were created from the native fauna of the Vale of Eternal Blossoms by the Mogu and while there are no dinosaurs in the Vale by the time of the Mists of Pandaria expansion, that’s easily explained by the Mogu having simply used all of their ancestral species as test subjects for the uplift process, which as we know used the strange magical power of Anima to flesh-shape the Saurok ancestors to their modern form. We saw Primordius in the Throne of Thunder and know there were missteps along the way — potentially these experiments cost so many of the dinosaurs of the Vale that the only ones to survive were the ones on the Island of Giants.

The belief of the Skumblade Saurok that their people were created by Kros the Devilsaur may hint at a dark truth, that Saurok were birthed from Devilsaurs themselves by the Mogu, using the powerful flesh-twisting Anima to work their will.

Okay, that’s the Queue for Friday. Take care of each other and I’ll see you next week.

Blizzard Watch is made possible by people like you.
Please consider supporting our Patreon!
Filed Under: Ashkandi, D&D, D&D Lore
Advertisement