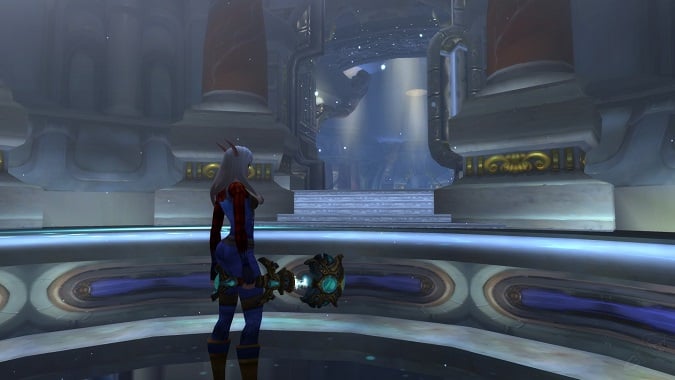 At today’s World of Warcraft Q&A panel, a player asked if we’ll ever be able to transmog our weapons into legendary weapons such as Val’anyr, Thori’dal, and the like.

In the early days of the Transmogrification system, the dev team worried about what the player population might look like. So they built in a lot of restrictions for silly-looking items and seasonal items. Initially, weapon types also had a lot of transmog restrictions. They have been slowly lifting many of these restrictions over time. In Battle for Azeroth, for example, Blizzard made every slot able to be hidden except pants.

Legendary weapons are one of the few remaining restrictions left over from the initial transmog implementation. Ion said, “Back then, legendary weapons were the coolest-looking weapons in the game. If you can transmog your Thunderfury, transmog your Atiesh or whatever, people will be walking around only using those, and it’s going to make them feel less legendary.” Now, however, he said that with so many cool weapon appearances, there’s no longer a good reason for this restriction.

Ion couldn’t give a specific date or patch for this change, but he said this change would be coming “very soon.”

This is a great change to a restriction that no longer makes much sense in the grand scheme of the world. The legendary designs are certainly still among the best in the game, but Artifact weapons have since topped them in the coolness factor, at least in terms of how they look.

Blizzard Watch is made possible by people like you.
Please consider supporting our Patreon!
Filed Under: BlizzCon 2019, Legendary Weapons, Transmog, Wow Qa
Advertisement