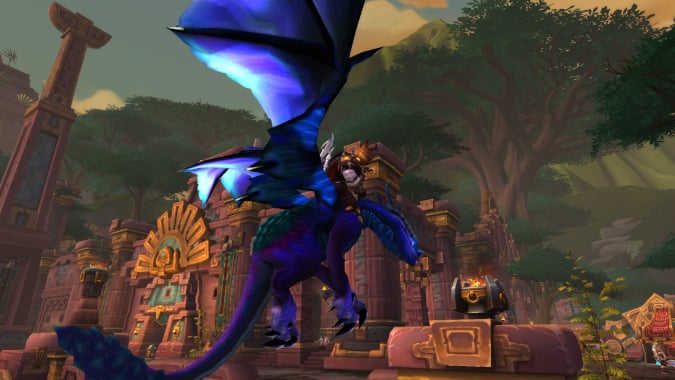 Getting to fly in World of Warcraft has been something players have enjoyed since it was added in the Burning Crusade expansion. It has allowed us to get some amazing screenshots, explore the world in new ways, and made leveling alts way easier. Earning the ability to fly over the years, however, has changed quite a bit. Ranging from costing gold, to a mountain of gold, to being tied to the Pathfinder achievements.

The most recent iteration in Battle for Azeroth required both parts of the Pathfinder achievement. This required several sub-objectives like completing story quests for entire zones, completing the war campaign, and raising several faction reputations to specific levels.

One of the bigger questions players have been asking since the announcement of Shadowlands has been how will flying work in the new expansion? Well, at the World of Warcraft Q&A panel we got a bit of an answer.

The requirements are going to be similar to how they are today. They will require a Pathfinder-like achievement, though the specific sub objectives have not yet been openly discussed. You can be certain that you will have to raise some rep and complete quest lines, likely heavily involving your Covenant, and will likely take some time before we can fly through the skies of the Shadowlands.

With this in mind, another question was brought up. The leveling experience for players is also drastically changing with players selecting what expansion they want to level through for levels 10-50. You can earn flying in that expansion that you choose, but what about the others? Will we have to go back to each of them and do some leg work? Will we be able to earn flying during that expansion choice and have it be available for all expansions?

This was asked directly to the devs and right now the answer is, well they don’t quite know yet. They still have to discuss how that is going to work, and will have to get back to us on that topic. With all the changes to leveling and how that’s going to work, I suspect this is going to be a complicated problem to solve, but now it at least is on their radar and we’ll likely get an answer in the near future.

Blizzard Watch is made possible by people like you.
Please consider supporting our Patreon!
Filed Under: Alt Leveling, Covenants, Flying, Pathfinder, Shadowlands, World Of Warcraft
Advertisement