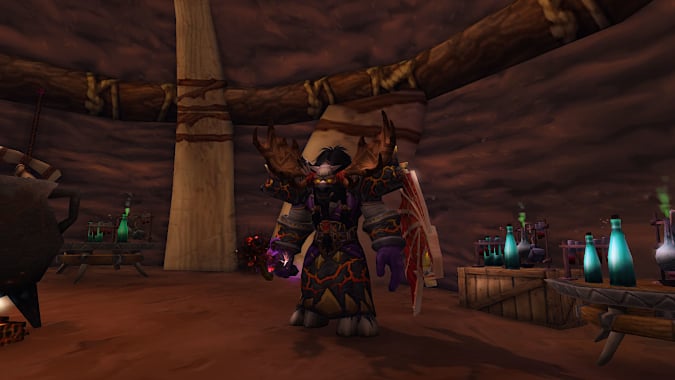 Class-based tier sets have been a staple of World of Warcraft since it was first released. These were powerful sets of armor that gave players bonuses based on how many pieces of the set they achieved, all while playing into the aesthetic of the class. You could look at a player’s gear and know exactly what class they were before you ever moused over them, which made battleground targeting real easy if you were an observant player.

Over the course of many expansions there have been many tier and class sets all with unique looks and unique powers to enhance a players abilities for their chosen spec. Lately though, in Legion and Battle for Azeroth, class specific tier sets and armor have sort of gone away and have been replaced with more generic sets for the different armor types. There are still small item sets like rings and trinkets that match and give bonuses, but largely the concept of grand armor tier set bonuses and unique art has been replaced with pure stats. I’m sure part of this is just the sheer number of classes and races now in the game.

During the World of Warcraft Q&A it was asked if tier sets would be making a return in Shadowlands. The answer we received is that yes, class themed armor will return at some point, but it won’t be in the initial patch. The developers mentioned that tier sets were originally a long term goal which, over the course of World of Warcraft, became easier to obtain. Then after obtaining the set, players sort of stuck with them and never swapped them out. Instead, Legendaries appear to be where we will get most of our satisfying player power from, and sets of items that feed off each other in smaller numbers, like 2 or 3 pieces, will continue to be made for players to utilize.

Honestly, there’s some truth in that. I remember having tier set bonuses from previous tiers that I would not un-equip until I had a very specific set of items from the next tier, which meant I had better gear unused in my bags because the bonuses on the worse tier gear were sometimes just too good to lose. I can be OK with not having massive tier bonuses again, as long as we get armor sets or items that are class themed. Maybe then my Shaman won’t be confused for a Hunter!