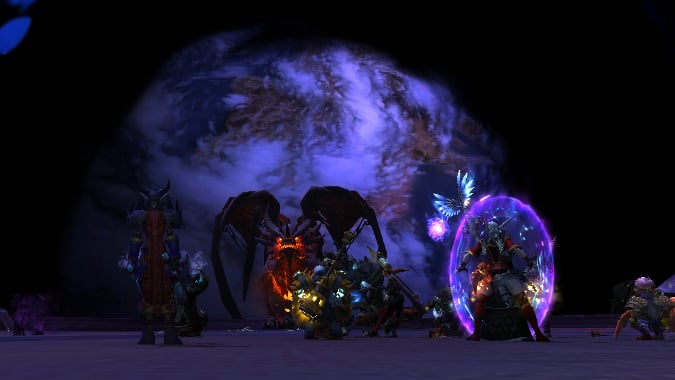 I have to say, so far I’m enjoying 8.3. No more faction conflict, a whole lot of Old God nonsense around, and I get to raid on a Fury Warrior again despite being geared like a circus clown. Two bosses down and a third boss to 5% on our first night of raiding, not too shabby. I mean, I keep getting belts from every single Major Assault I do and the Minors seem to have forgotten that gear can drop, but overall, I like what’s happening now.

Does the Horrific Vision switch from Orgrimmar to SW today? Rhetorical question: will I waste another vessel figuring new stuff out (yes)?

Honestly, while I know I need to get my cloak buffed up soon, I haven’t really bothered that much with the Horrific Visions as of yet, but I did know that it is Stormwind this week. Frankly, I wish we could pick which city we get, or even alternate between them on successive runs or something. I have four vessels on me right now and I’m debating holding off on buying a fifth so that I can use them all in one go on Friday after the next Minor Assault. That way I’ll get to learn from my mistakes a little better.

So, who here’s excited about Heroic Darkshore Warfront?

Me. I like Warfronts. Not everything has to be super complicated to be fun for at least some of us. I like the laid back Warfront playstyle and I’ll likely try and get my guild to run this a few times on an off night.

They’re not going to replace anything for me, but I do like them.

Magni, if you really wanted people to quickly go dispatch the minions of n’zoth, you would use some of your diamond wealth and get a flightmaster

“Matt, if you really wanted some help finding an agent, you’d sell one of your kidneys so you could afford a service.”

I mean, that’s not random diamonds he has lying around, that’s him. That’s his body. He’s made of diamond, he’s not just sitting on a lot of diamonds. I mean, seriously, that’s kind of creepy to think about.

TKC WANTS TO KNOW ABOUT HORDE/ALLIANCE INCURSIONS AND LOOT

Q4tQ: speaking of ilvl rewards, is the Drustvar incursion ilvl 370 or did it get bumped up too?

I did one today because I was in the area anyway and it was still ilevel 370, while the Emissary I did rewarded 430 gear and even the blue WQ gear was 420. It does not appear to have been upgraded with the Season.

Q4tQ: Do you think The Deathlord ever gave Shadowmourne to Bolvar?

No, it’s still in my Warrior’s bags.

I really have no idea how to deal with the idea that N’Zoth didn’t get enough build-up in this expansion, or that the end of the Ny’alotha raid isn’t good enough, or what have you. It feels like the kind of madness that an actual Old God would cause when I think about it. The choice to use an in game cut scene there was almost certainly because you can’t center the player with a pre-rendered cinematic, and the second scene that plays when you visit Magni after killing N’Zoth does even more to make the player the center of this storyline.

That’s just my take on it, though. I’m enjoying this patch. It even got me to come back and raid again.

Blizzard Watch is made possible by people like you.
Please consider supporting our Patreon!
Filed Under: N’Zoth, Ny’alotha, Patch 8.3
Advertisement