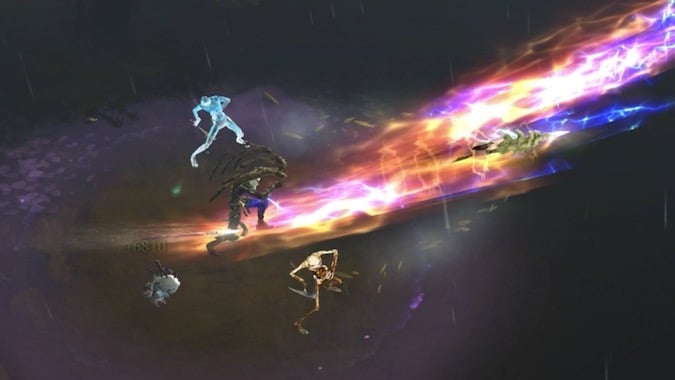 Patch testing for any video game makes for a unique experience, and Diablo 3 is no exception. Some changes may overperform, some underperform, and some might be straight-up broken. Initially, I was not sure any of these apply to the buff provided by Season 21’s Trials of Tempests theme. Once Blizzard added some quality-of-life improvements by way of a PTR patch, I realized how much I had been fighting to understand the buff. It’s always nice to see a buff that will help from the onset of the season, but how much help will we see from these elemental powers?

The original patch notes describe the Trials of Tempests as such:

The primal forces of Sanctuary manifest to aid you in the fight against the swelling darkness.

This flavor text is accurate by the way; while you are playing with the seasonal theme, the buff experience is one of spontaneous aid from seemingly random elemental forces. It’s kind of like having a Shaman from World of Warcraft following you around, casting random abilities.

In testing, initial encounters with the buff were… odd. The precursor indications to an elemental event were auditory and visual (with a specific color/weather overlay such as snow/rain or tan/red/green). Logically, this should be helpful, but distinguishing the red or green may be difficult for any players with color-blindness. This distinction won’t necessarily process then.

It was also challenging to gauge time passing between elemental events, even with doing something like setting a stopwatch. Forget speed runs; with the two-minute timer, you’d likely get one proc of the seasonal buff. It was easier just to forget it existed, and be pleasantly surprised when it showed up. Luckily, some of these gripes have been accounted for in the PTR update following the first week of feedback:

Originally Posted by Blizzard Entertainment (Official Post)
Developer’s Note: We’ve received a lot of feedback regarding the seasonal theme being difficult to track and that it sometimes didn’t feel like it was appearing or doing much to gameplay. We are adjusting the following:

The buff icon is such an improvement. Clocking when the next buff proc will occur means you can focus on grouping and then let the elements of Sanctuary tear through a swath of demons. Even small changes can have a significant impact! The reduced timer is helpful in certain scenarios (like GR pushes), but speed runs still may only see one proc of the buff. Group key-farming runs, especially for higher-level players, can easily clock in at the sub-three-minute mark. Even with the change, the firewalls are a bit disappointing; it’s useful that they start at the caster, yes, but there’s going to need to be an emphasis on player aim for this elemental cycle to be of use.

From the notes, we know there will be another adjustment in the season buff effects to avoid an Area Damage proc, so we won’t know the final results until Season 21 starts. In the interim, use your remaining time with Cube-O-Rama to land yourself a creepy bat pet from the Season 20 journey. The elements of Sanctuary await!