Up until now the D&D Beyond app for smartphones and tablets was a reference app, which was really useful if you were looking up information from one of the books in your virtual collection. But it didn’t let you look up your character sheet — for that, you needed to go to the site on a browser, and while it worked, it was a trifle awkward. It wasn’t the app people wanted, I think — for most players, as cool as a reference app could be, it doesn’t give them the primary functionality of having their character at a moments notice.

Thankfully, D&D Beyond is a pretty responsive service, and they’ve brought us exactly what we were asking for. The D&D Beyond player app allows you to manage your characters and even create new ones, making it significantly more flexible and useful for more players. 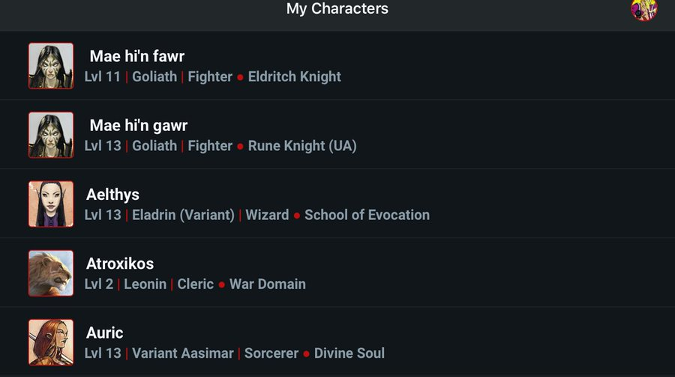 First up, I’ll say that I find the app a lot easier to use and navigate on a tablet device than on my phone, but that’s something I can say about literally any app. On my tablet, the display is clear and has plenty of room to navigate — it goes straight to the character window and allows you to pick one of your pre-existing characters or to create a new character. If you choose to make a new character, the interface and menus are identical to the website, so our article on using D&D Beyond to make a character is of use to you here. It’s literally the website interface, the app just takes you to it.

The actual character display part of the app is significantly more streamlined than on the site, however. It displays all of your characters as seen in the image above, allowing you to view any and all of them in significant detail. 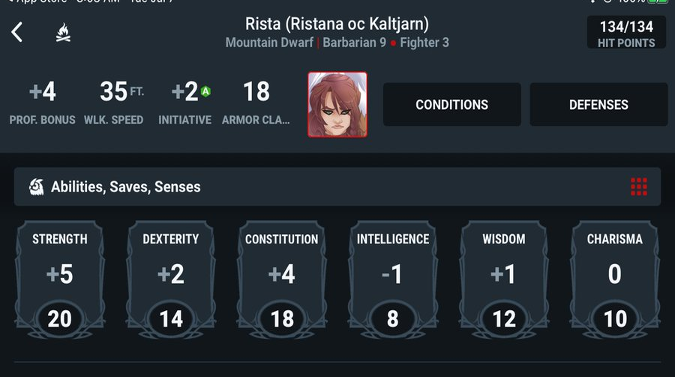 I picked my Barbarian, Rista, who I’ve been tinkering with in order to think about potential builds. This version of her is a Barbarian 9/Rune Knight Fighter 3, which showcases that the app can handle Unearthed Arcana and other sources just fine. Pretty much all the useful information is available, with the nine boxes in red allowing you to select one of several screens — Equipment, Features and Traits, Spells, Attacks and so on — if what you’re looking for isn’t on the inital Abilities, Saves and Senses page.

As you can see, Rista is an ace at Str and Con saves, not so great on other saves (Barbarians, what are you going to do) and while her perception is decent, both her insight and investigation are less than stellar. Being a Mountain Dwarf, she’s got advantage against poison saves and as a Barbarian she gets advantage on all Dex saves when she can see the effects coming. Plus she has two items that grant a +1 to all saves, which is the only reason that Int save isn’t negative. Pretty standard stuff for a Barb, all laid out for you on the first page of the character sheet. 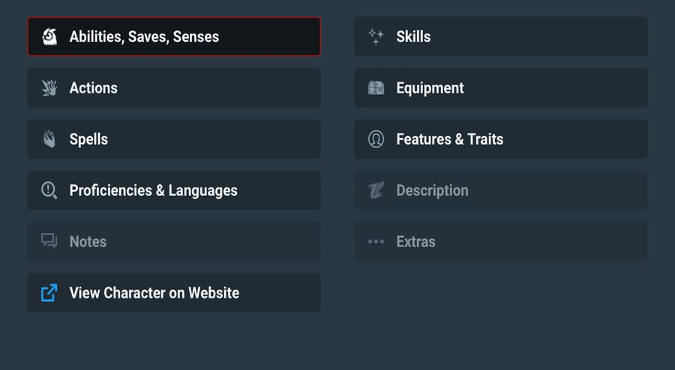 There are pages for skills, actions, spells, equipment, features and traits, and proficiencies and languages. Notes and extras and the description page are not implemented yet. If you dislike the way the app displays you character sheet, the app can take you directly to the site in an internal browser as well, so if you really need to look at the notes page it’s possible if a bit clunky. I personally have Rista’s rather comprehensive backstory there.

So, what’s the verdict? Well, it’s basically a character sheet app. The strength of it is that it’s connected to your D&D Beyond account, so if you have a lot of characters you’re juggling you can use the app to access all of them which is pretty great, and it’s a solid character sheet app as well, with pretty much all the details you could want easily accessible. I’d prefer it if the Description, Notes and Extras pages were already implemented, of course. Being able to look at the sheet on the D&D Beyond website from the same interface is a decent workaround.

I couldn’t find a means to edit my character sheets via the app without again going to the website, and that was a fair sight more difficult than anything else. In my opinion, this is the one option the app needs to add as soon as possible in order to make it go from a nice to have application to a must have application. If I get a new weapon or a stat increase, I want to be able to add it then and there.

Still, I liked it, it’s definitely got potential as an easy to use one stop app for my characters. And it’s free, so it’s not like it’s going to cost you a bundle to use. If you’re playing D&D it’s worth a look.