Remember when Legion was first announced, and we World of Warcraft players were first tantalized with the features that would end up dominating the expansion? The Class Order Halls, the various campaign questlines, and of course the Artifact Weapons that were so much a staple of the expansion? I spent the entire expansion leveling up my Artifact, gaining new powers, new appearances, it was a major part of the gameplay. It was, basically, an extension of my character — a progression path entirely tied to the weapon allowed me to grow more powerful as I gathered Artifact Power — and I’m not arguing that AP was without flaws here — and each spec had a specific Artifact that tied gameplay and lore together in a fascinating, never before seen way in WoW.

As soon as the expansion was over, so was all of that. Our Class Order Halls, those magnificent edifices where Azeroth’s greatest heroes all united? Left empty. Our massively powerful Artifacts? Drained of their power, we left them behind to collect dust in the bank. Our various legendary items? Abandoned, no longer of use. And while I’m not arguing that any of these decisions were bad ones, I do find myself wondering, now that we’re almost done with Battle for Azeroth and we’ll soon be leaving the Heart of Azeroth, Azerite Armor, Essences, and Corruption — all those mechanics that have defined this expansion for good or ill. This has me thinking about all the changes and new systems in Shadowlands, and realizing that all of it — the new crafting system for legendary items, Torghast, the Covenants, and Soulbinds — all of it will last us exactly one expansion.

It feels strange to me that so much of what we do at max level is gone once we get the next one.

This isn’t exactly new — I’m used to things like leaving behind the content of the previous expansion as soon as the new one comes along. But it feels strange to me that at the same time that we’re seeing systems like Timewalking begin making older content somewhat evergreen, and systems like Transmog, Raid Finder, Group Finder, and others lasting beyond the expansions they were created in, that so much of every expansion since Legion has been one-and-done. It feels a bit like if we got a system as useful as LFD today, it would last for an expansion and then be left behind in the rush to change the entire game once we got to the new hotness.

Now, I’m well aware that a lot of systems have come and gone over the years. I remember Reforging, which was removed after Mists of Pandaria because people felt like it trivialized gameplay and gear selection, and required a lot of outside game tools for players to make use of it, and that was due to the fact that players were using it not to make less than ideal gear somewhat useful but instead to utterly optimize gear sets. I’m not opposed to the removal of a system that either no longer works or has outlived its usefulness. I’m more wondering if there’s a problem with deliberately designing game systems knowing they will become obsolete at a specific point in time. 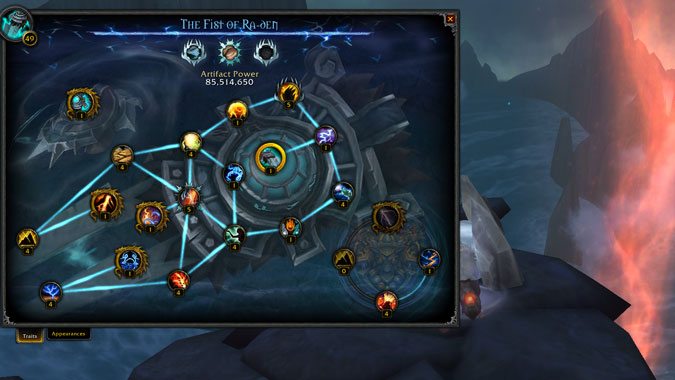 Should we have done more with our Artifacts?

I’m on the fence to this day about how Artifacts worked in Legion. There was so much I liked about them, but at the same time, the AP grind was interminable and ultimately there was no choice in the Artifact system — you selected the path you progressed in, yes, but ultimately as you ground more and more AP you ended up with every power selected and higher and higher levels of power. There was no exclusivity — you just kept spending power and getting more and more for it. Technically there was an upper limit wherein you could grind and grind and the cost of the next level was practically out of reach, but you still didn’t have to make any choices. I can’t say I wish Artifacts had remained relevant for another expansion, but at the same time, there’s something I find offputting to this day about being a Shaman, wielding the Doomhammer, and then sticking it in the bank. And yes I can transmog to it, and I like that, but it’s still odd to me to realize this elaborate, class defining system centered on these fabled items was always meant to be a one and done affair.

Meanwhile, the Mission Table survives expansion after expansion, and frankly I’m a little baffled. It’s been a lot of things, but I’ve never personally found it fun enough to keep bringing it back. And yet, from Warlords of Draenor it endured, through Legion and Battle for Azeroth, and now another version of it is coming back in Shadowlands, making it one of the longest lived systems we’ve had. Only LFR and Transmog have done better, really — both were introduced in Cataclysm and have endured to the present day. The old Badges of Justice system endured in one form or another from The Burning Crusade to Cataclysm, although by the time it was finally on the way out it was so thoroughly changed that it was barely recognizable. Still, systems were designed and iterated on, not created to be abandoned.

Of course, there are also positive aspects to a system you know won’t be sticking around.

If you hate it, then you know that it will pass. And by designing a system knowing it won’t become part of the core gameplay on a permanent basis, designers are free to experiment and push systems further. Not every experiment works, but systems like Corruption are the result of several previous systems. Also, think about how weird it would be if Artifacts had held on and we’d stopped collecting weapons entirely, and then we went into Shadowlands and our Hearts of Azeroth meant that we never needed a neck slot item again. It means we’d be slowly reducing the items that drop. In a game where gear is constantly obsolete — and has been since the first expansion dropped — that would feel bizarre and potentially damage gameplay.

I guess to a degree I’m split because I’m a lorehound, and the loss of Artifacts and Class Order Halls meant that so much story got left behind, and not just story for Legion. Why did the Class Orders decide to sit back and let Sylvanas run amok? Why didn’t carry forward the solidarity that saved Azeroth in Legion? I personally would have liked to see a continuation of those Class Orders and a bit of story about what they were up to while things got steadily worse. Were Hunters trying to track her down, or Rogues trying to touch base with all their operatives in an attempt to trace loyalists? I feel like a good case can be made for the fungibility of these systems as game mechanics, but when they have extended lore or story elements I find their passing almost destructive.

In the end, while I’m not surprised or sad that we’re losing things like Azerite Armor or Corruption — especially since the idea of Corruption is so linked to N’Zoth and the Black Empire — I do hope some of Shadowlands ideas and systems move beyond that expansion. Perhaps we’ll leave Torghast behind, but the concept of the endlessly repeatable Torghast should be a lot more enduring. If we can have the Mission Table four expansions in a row, surely we can have a roguelike soloable dungeon for two?