The geography of Sanctuary in Diablo, and the places we hope to see in Diablo 4

Sanctuary, the world where the Diablo series takes place, is still mostly unexplored, and mysterious — a land of many continents, nations, and cultures, teeming with potential. None of the previous Diablo games have fully uncovered it; certain lands, both near and faraway, we’ve only heard reports of. Such a state of affairs is tremendously exciting from a lore standpoint: it makes the world feel vast, uncharted, enigmatic, and immersive.

We do have bits and pieces of information, from the accounts of travelers, explorers, and scholars, as well as our own experience with the places we saw firsthand, surviving the evil that befell them. Let us take a look at what we know, as well as speculate on where the next game in the series, Diablo 4, might take us.

The most notable locations in Sanctuary

Although Sanctuary is vast and much of it seems distant and vague, large cities and populated nations exist, as well as smaller but important towns, which have been the stages for the games in the series so far. We will take a look at some of these noteworthy societies, that we have visited, or that our heroes originated from.

A nation established by the self-declared King Leoric, who hailed from Khejistan, and founded this land in the name of the Zakaraum faith, which was spreading in the west. It was Leoric, and his most trusted advisor, Archbishop Lazarus, who were first corrupted by Diablo — thus it was in Khanduras that the evil of Diablo began to spread again in the recent years.

Khanduras could be considered the main nation of Sanctuary, when observed from the point of view of the events that relate to the wars against the Prime Evils. Both Tristram and New Tristram were located there, as well as other cities we have visited, like Wortham, and places such as the Cathedral where Diablo rose in the first game.

An ancient empire, encompassing lush jungles and harsh deserts, which composed most of the civilized parts of Sanctuary. It spearheaded the study of magic, and the Mage Clans originated from here. Always targeted by demonic invasions, the once powerful empire eventually collapsed, as the corruption of the evil forces persisted, and the people lost faith in the Zakarum and in the mages.

Important cities include Caldeum and Kurast, both former capitals. The city of Ureh, called the Light of Lights, is also in Kehjistan. This city appears in one of the cinematics of Diablo 3, but ended up being cut from the final game. In the border between Khejistan and Westmarch lies Lut Gholein, which was one of the main hubs of Diablo 2.

Another important Western Kingdom, created as the Crusaders literally marched west to spread the religion of Zakarum. It is lush and drenched by rain, and thus, fertile. Along its coast, maritime trade prospers. Its people are proud, oriented by mercantile and cultural affairs, and a division between commoners and nobility.

Westmarch City and Kingsport are notable cities. The former is where the events of the fifth Act of Diablo 3 took place, with Malthael’s Reapers bringing death and despair. The latter is a large city with both rich markets and pauper slums, the presence of guilds of merchants and thieves. Several notable characters hail from Kingsport, but we have yet to visit it.

In the northern part of the continent lies the sacred Mount Arreat, destroyed during the events of the second game, turning the area that surrounds it into a wasteland. This is where the Barbarians, who worship Bul-Kathos, were originally from, when it was known as the Northern Steppes. Since the destruction of the land, Barbarians have scattered around the world, and only some of their ruined settlements remain.

But the place didn’t stay vacant for long, as the Demon Hunters chose to dwell in here, due to its abundance of demons — a perfect place for them to hone their skills. We are now away from civilization and prosperity: the Dreadlands hold only more primitive settlements or war-tempered fortresses, such as Harrogath and Sescheron, ancient homes of the Barbarians now in ruins, and Bastion’s Keep, a fortress constructed by the people of Westmarch in order to wage war against what they saw as the “Barbarian threat from the north.” 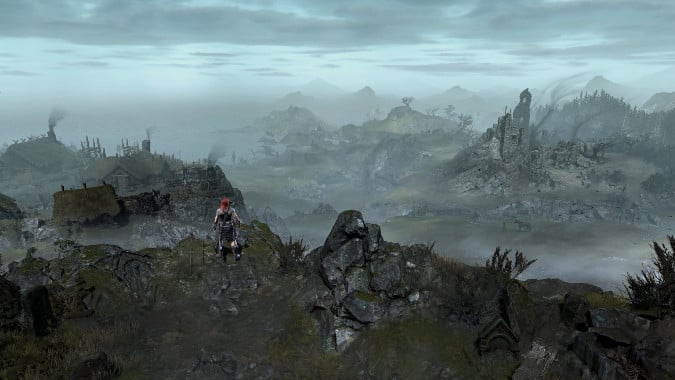 Lush and verdant, but wild and infested by werewolves, these gloomy fog-covered forests are the home of the Druids. Due to its proximity to the frozen north, this place also draws from many of the same influences that shaped the culture of the Barbarians. Ancient stone towers lie all over Scosglen, where its people are trained into Druidic traditions. The wild menace is ever-present here, and its inhabitants must constantly fight for survival against natural forces that would prey upon them.

The Temple of the Firstborn, which features in Diablo 3, is located here. It’s the place where Inarius and Lilith first settled, and therefore, it can be considered the birthplace of humanity.

The northernmost region of Sanctuary, Xiansai is an island full of repositories of arcane energy. It is the home of the Xian, a people that remained mostly isolated, practicing magic — probably for millennia, as suggested by their ancient arcane artifacts. Wizards, playable in Diablo 3, hail from here — although remote and confined, Xiansai is occasionally visited by mages, in search of new, promising pupils to study under them.

With its segregation, Xiansai has remained mostly away from the major conflicts that plagued Sanctuary. But the island has seen its own internal strife, as the Great Families that rule it machinated against one another.

These isles were where the Askari people — the Amazons — hailed from. The four major isles are mostly composed of rainforests with toxic flora, and a mild climate, never harshly affected by winter. It is said that in the Great Hall of Mirrors, a structure with an icy cave at Mount Karcheus, the god with that same name, who watches over the Askari, resides. It is from Karcheus that the Amazons draw their powers to shoot freezing arrows, and call upon avalanches to destroy their enemies.

The Askari worship other gods in addition to Karcheus, as well as other figures that aren’t deities, in their polytheistic religion. But not much else is known about this people, or how they have fared during the events of the last few decades.

A city located in snow-capped mountains, that was destroyed by the Reapers, followers of Malthael. This is the place from where the Monks originate. They embrace a faith completely different from that of Zakarum, called Sahptev, which worships one thousand and one gods and goddesses — among which Tyrael, and other members of the Angiris Council, are included.

Denizens of Ivgorod have very different customs and beliefs than those we have seen in the Western nations. Although we know not much about them, other than what we have seen from the Monk class, we do know that they have rich and ancient traditions that greatly differ from those of Khejistan, Khanduras, or Westmarch, and countless uncharted possibilities.

Which of these places are likely to be in Diablo 4?

With the return of the playable Druid class, Scosglen has already been confirmed to be one of five regions we will visit in Diablo 4. But which other of these regions might we seen in the much-expected fourth game of the series?

Khanduras has been in every Diablo game so far. It is certainly a possibility that we will, once again, visit the lands of King Leoric and Tristram. Westmarch also bears a constant presence in the story, with the Crusaders and the faith of Zakaraum that has fought the Prime Evils for so long. It is easy to imagine either of those more urban places to be filled with people that might take interest in the return of Lilith, for better or for worse.

Xiansai holds much promise, with its ancient artifacts and arcane mysteries. The fact that it has remained mostly away from the general events of Sanctuary means that it has the potential to hold dormant secrets that could inject fresh new elements into the story. The very same could be said of Ivgorod. Both of these places draw from real-world Eastern culture as inspiration. The events of Diablo 4 could always take us to places like those when the time for new lore to emerge comes.

The Skovos Isles also hold a mostly unknown culture, and several deities who might bring forth new influences upon the world of Sanctuary. Regardless of whether Amazons make a return or not as a playable class, this could be a very interesting place to explore, with its aesthetic influenced by Greek-mythology, which would be a refreshing departure from the norm that has been found so far in the Diablo games.

All in all, Sanctuary has the advantage of being still mostly undiscovered, which makes it tremendously exciting from a lore standpoint. There is a lot of value in not revealing everything to the players; leaving us always wishing to know more. I hope it stays that way, and that we only uncover these places slowly, one by one, giving time for each one to reveal new, fantastic mysteries for us.

Diablo 4 could certainly gain to differ from the norm we have seen in the previous games, which mostly boils down to: cities inspired by medieval Europe, jungles, deserts, and the frozen north. We could always break that mold, visiting places like Xiansai, Ivgorod, or Skovos, and even others that are still completely unknown. And I hope we do.

Blizzard Watch is made possible by people like you.
Please consider supporting our Patreon!
Filed Under: Sanctuary
Advertisement