World of Warcraft’s Next Top Mount™ poll has been going for a nearly two weeks, and you have less than a day to cast your votes. I’ve seen lots of different opinions about which is the right choice to vote for, but for some weird reason, the objectively correct option isn’t currently winning. When I went to cast my vote I was shocked to discover that people had been voting for the Wandering Ancient instead of the clearly better Gooey Slimesaber.

Jellycats are the best of the new battle pets that I’ve seen. They’re so cute that there’s even an achievement to find and pet all of the ooze kitties hidden in Maldraxxus. So having the option to get a mount sized version of one of them? Sign me up!

I know that we have lots of other cat mounts in the game, but none of them would be as amazing as the gelatinous version. Having a semi-transparent mount would have its advantages. Think of all the great skeleton details that can be fit inside of the mount —  and how easy it would be to keep an eye on what your cat has been eating. If you’ve put it on an all kibble diet you’d want to know if it’s been sneaking the occasional Gnome or Goblin.

Choosing the Oozesaber would also let us finally have a mount that makes sense in-universe for why it’s different sizes for different races! Clearly it knew that it would need to bulk up to carry around that Tauren, so it spent a little extra time in the slime pools of Maldraxxus. They could even make itself a set of wings and become a flying mount! We don’t know what this goop is capable of, and it’s clearly a very magical substance, so why wouldn’t it be able to fly? Or maybe they’d come with an extra rubbery jump and could get up a little higher like a Demon Hunter double-jump.

The Slimekitty is also the only one of the new mounts tied directly to one of the new areas of the Shadowlands, making it a purrfect mount for players who really love the aesthetics of the Necrolords, but are after one of the other Covenants powers. It’s a good thing that a pair of Kyrian wings wasn’t one of the options, or the poll would’ve been foregone conclusion. 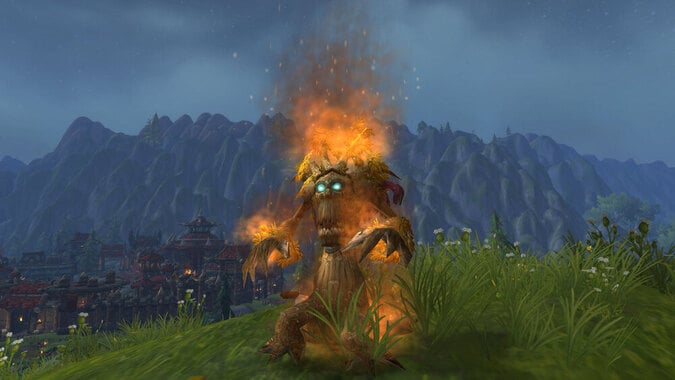 What about the other choices?

Honestly, I’d be happy with any choice other than the Wandering Ancient. They’re much too flammable to be running around all willy-nilly. Plus trees aren’t exactly known for their speed. Would that Ancient even want to go tearing off like a racecar at the beginning of your next Alterac Valley or Arathi Basin match?

The same thing goes for the Caterpillar. I need to reach my destination sometime this millennium. Imagine if your whole raid team was riding them — by the time you would reach the raid, all of the bosses would’ve passed away from old age. Even Immortal Vampires like Sire Denathrius would just be piles of dust.

The book is interesting, but Mages already have vaguely magical floating discs, and for the rest of us there’s the Red Flying Cloud mount from Pandaria. On the other hand, if the book’s cover flapped like bat wings — just imagine how air-sick you’d be by the time you reached your destination. You thought that the Cloud Serpents had a wavy flight path? Open books aren’t known for their aerodynamics.

I really wanted to vote for the Nerubian Swarmer because the Nerubians are super cool, but the pet version of a Nerubian Swarmer that’s already in-game just reminds me of one of the Bloodfeaster mounts from Nazmir. If we got any Nerubian I would hope that it’s more like a Crypt King or one of the more spider centaur versions — at least that would have a great new silhouette for players to ride around on. Since they didn’t call it a Crypt King I have to assume that it won’t be a big and badass spider covered in intricate armor, and therefore not as good as the big Jellycat.

I think it’s clear. Vote Slimesaber to ensure we all reach our destinations in a timely manner. Remember that you still have until September 18th to cast your vote — or maybe change it. I hope that you’ll join me in making sure that we’ll all be riding in ooey-gooey style in Shadowlands.

While we wait to see the results of Blizzard’s poll, you can check out our video guide to the Nine Afterlives achievement. To complete it you have to pet nine jelly cats scattered around the zone of Maldraxxus in WoW Shadowlands.