The Queue: Shadowlands and you 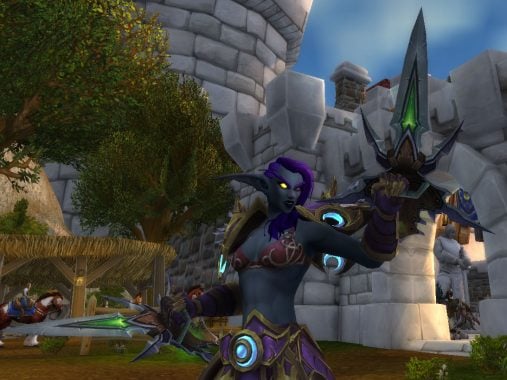 We officially know when Shadowlands will be live, which I’m sure is a big relief for a lot of us. For myself, I’m just hoping that I figure out which character I’m taking to 60 first by then — it’s a toss up between my Dwarf and Night Elf Warriors for me.

I like my Dwarf a lot but my Nelf has unfinished business this time around.

I’m a returning player, and haven’t played for about three years. Slowly learning things that have changed. (Big one, professions are gutted and only the most recent expansion ones matter. Busy selling all these old mats.)

My question: Are there a bunch of Dalarans? I’m a little confused about it. I have several alts that are there, and I’m not certain if some are in the Legion time frame, or prior to that (or after that?). Do I need to figure out ‘which’ Dalaran my toon is in and switch if in the incorrect space or time? I hope that all makes sense.

(I’m similarly a little confused about time walking as well. Will all the mobs be my level wherever I go? Thats not fun. This one I think that I’ll naturally figure out.)

It really won’t be all that hard to figure out which one you’re in — there’s a portal to the Dalaran in the Crystalsong Forest in Northrend in the portal room of Stormwind or Orgrimmar, for example, and you can get a Dalaran Hearthstone that teleports you directly to the Legion version of Dalaran.  I’m not saying I’ve never mistakenly gone to one when I meant to go to the other, but it’s rare.

I assume your last question is about Timewalking Campaigns, which we covered the other day — the mobs do scale to your level as you’re leveling through them. But if you’re just going to, say, Draenor or Pandaria on a max level character, the mobs are not scaled to you, although they’ll be closer to your level since everything is squished down.

SILVERKEG WANTS TO TALK ABOUT SYLVANAS

I think I’m forgetting something. Didn’t Sylvanas admit in the Loyalist ending that she cared nothing for the living (although she pitied the Forsaken)? Even if she was resurrected, why would she feel any different?

The Forsaken do not feel emotion the same way they did before they died. It’s long been established that, while some of them still seek connection with their former lives, others do not — and we’ve seen in books like War Crimes that to Sylvanas, the emotions she felt in life are like a phantom limb, they’re actively painful to her to recall and she doesn’t truly feel them as she once did.

Back in 2019 I proposed that Sylvanas’ punishment should be resurrection for that very reason. The worst fate I could conceive of for her would be to have to live with all the pain she’s caused. The way she acted in War Crimes showed how her current emotional state is twisted by what she’s endured and her undead state — the way she planned to kill Vereesa, not out of hate or malice, but out of a detached sense of love and want of companionship — and once she was a living Elf again, her emotions would likely be almost impossible to endure. The weight of her actions could come crashing down on her.

But we don’t know.

GLOWING METEOR CARROT HAS AN OPINION

All of this could have been prevented if we had let N’Zoth win. He was a true hero but we were too blind to see it

Considering all the eyeballs the dude flung at me at random moments I think it would be ironic if that were the case. I also don’t think it is, just to be clear. Old Gods are like that one guy who can be really convincing because he believes his BS just long enough to get YOU to believe it. N’Zoth never once cared about death rising or the Jailer, and he had no real plan to deal with what’s coming, since if he’d gotten his way the Old Gods would have corrupted Azeroth and thus achieved the mission the Void Lords set them to all those eons ago.

MEDRAUT IS HAVING A BAD EXPERIENCE DOING HEADLESS HORSEMAN

So that makes two shadow priest “healers” in a row for Headless Horseman. Not a fun tanking experience :/

A lot of times people seem to have a hard time with the concept of only queuing for a role they actually intend to fill. I’ve seen it a lot with ‘tanks’ who come in as a DPS spec and refuse to get out of it — a couple of times I’ve queued up as DPS but ended up switching specs to Prot or Blood and tanked, which is very annoying for me as I didn’t sign up to do that job.

To a certain degree it feels like people expect to be overpowered enough that it doesn’t matter and don’t really grasp that we’ve just been through a big level squish and class changes and we’re not all balanced at level 50 the way we were at level 120. I feel your frustration, it’s very annoying.

MOVEWOW ASKS A QUESTION I FEEL HAS AN OBVIOUS ANSWER

Q4tQ: Now that we have a date for the release of Shadowlands do you think we’ll start to commercials for it? In the past I’ve enjoyed the celebrities (Mr. T, Chuck Norris) that Blizzard had in them. If they hired another celebrity to star in a commercial for Shadowlands who would you like to see in it? Maybe Alice Cooper?

ROXXII THE BELOVED ASKS ABOUT CATS AND HOLIDAYS

Q4TQ: Will the cats be dressing up for Halloween?

To be honest, my cats have been through a lot the past few months, I’m not going to stress them out dressing them up in costumes. They’re cats, they’re already perfect for the spooky stuff without a costume. Purest gold requires no gilding, after all.

MAALIN WANTS ADVICE ON HOW TO WEATHER THE ZOMBIE INVASION

Q4tQ: I’m not running WoW from a SSD so it takes a fat few minutes for me to zone in and actually be able to see what’s going on. Come the zombie invasion I will easily be dead before I even have control of my character. Where’s the safest place to park my characters ahead of time? Garrison? Flying above Boralus or some other main city? Thanks

Garrison is absolutely the safest bet if you just want to avoid the Zombies entirely. If, however, you’re interested in getting to do the quests, I agree with the general idea of Arthonos’ response — parking over the lake in SW on a flying mount higher than 30 yards above the ground is probably the safest way to load into SW to ensure you don’t get ganked by the walking dead.

Honestly I don’t have much to add here but I thought people might like to see Arthonos’ answer, so here it is.

Okay, and that’s the Queue for this Friday. Have fun and stay safe for Halloween and here’s hoping for a good November for us all.