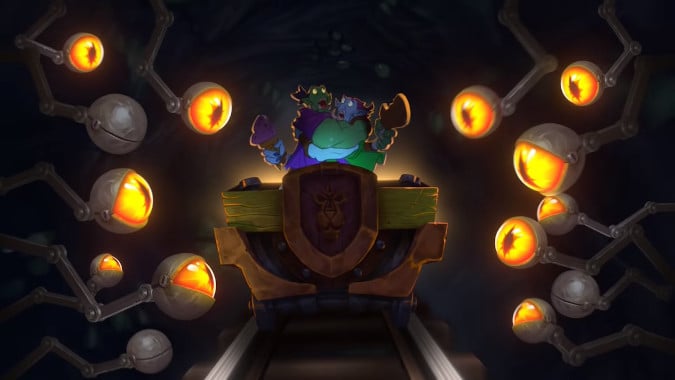 The newest expansion for Hearthstone, Madness at the Darkmoon Faire is now live, and it introduces many new features: the game is adding a Rewards Track, more collectibles, Achievements, and Duels. And as with most expansions, the game is also adding a new keyword — and one WoW players will be quite familiar with — Corruption.

With the Old Gods invading Hearthstone, some cards will have the keyword Corrupt, which will improve the card after you’ve played a card with a higher mana cost. The text after the keyword states how the card improves once the Corruption is triggered.

If that doesn’t make much sense to you, here are some examples. 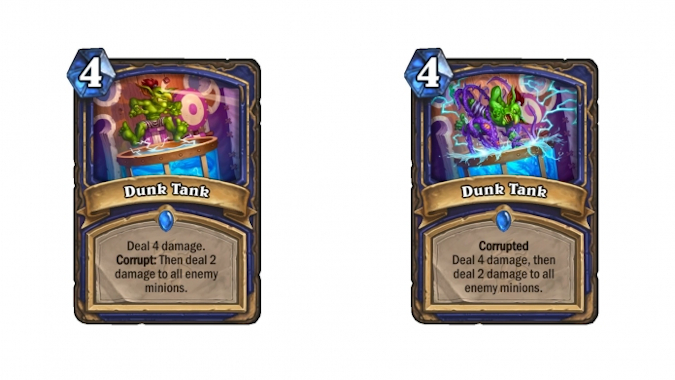 For example, Dunk Tank. Because it’s a 4 mana card, the player must play a card that costs 5 mana or more while Dunk Tank is their hand to trigger the Corrupt keyword.

How will the player know when the requirement has been met? The card will change into a Corrupted card, and now states its new corrupted effect. In this example, triggering the corruption means the card deals 4 damage to a single target, then 2 damage to all enemy minions. And if you need a more obvious cue, the image at the top changes as well, proudly showing off its Old God influence. The picture updates to add extra eyes, and tentacles, and all the physical traits that are associated with accepting the gifts of the dark masters. 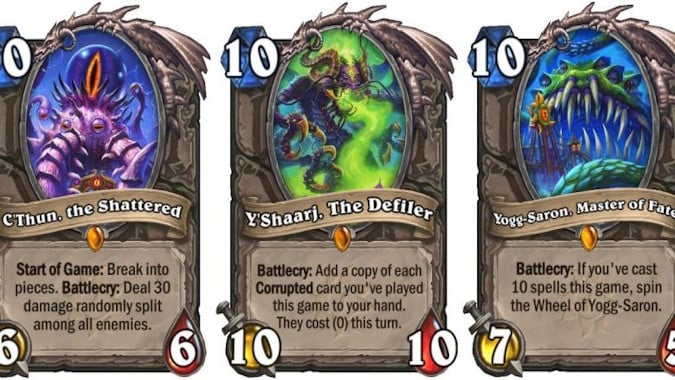 How to use Corruption cards in your Hearthstone deck

With the Madness at the Darkmoon Faire expansion, there are four — so far — Old God cards, and the only one that affects Corruption is Y’Shaarj, The Defiler. Dropping this card gives you a copy of all the Corrupted cards they’ve played this game, letting you play them all for 0 mana as long as you play them on that turn. (On subsequent turns, they’ll have their usual mana cost.) A Corruption-heavy deck could deal out a lot of damage at once with this Battlecry.

However, playing these cards throughout the game will require a time investment. To get the most out of them, they can’t be played when drawn early on, because you have to play higher cost cards while holding them. Since the few Corrupt cards we’ve seen so far cost 3, 4, or 5, you won’t be able to build Corruption quickly. These cards will be best used in Control decks: keep your opponent at bay early on, then play Corrupt cards late game for maximum damage.

The preview season is still early, and there are a lot of unseen cards. This mechanic rewards players for holding onto cards, and not playing on curve, which could change up aggressive playstyles. Cards with effects that change aren’t new — we’ve seen card text update each turn or based on other cards played.

But Corruption’s complete transformation, updating the art of the card during the match, shows more imagination. A visual cue to help keep track, but also a way to demonstrate real change like Old God influence.

These cards have a lot of potential to change up the game, but until we’ve seen all of them in action, it’s hard to say how big of an impact they’ll have on the upcoming Madness at the Darkmoon Faire meta.