Diablo 4 goes into detail on weapon types and rarity in the latest Developer Update, and sockets are back

I’m excited every time we get a Quarterly Update for Diablo 4, despite the fact that these are updates for a game that’s not out yet and that could all change at a moment’s notice. That’s because there’s a fascination in seeing what direction the development of the game is going. I was especially interested in seeing the December 2020 update because it talked in detail about the Skill Tree, goes into depth about stat allocation and how that can be customized, and then follows that up with some interesting information about legendary affixes and how Unique items are going to work. It’s like a Diablo 4 Christmas, only I’m not terrified yet. 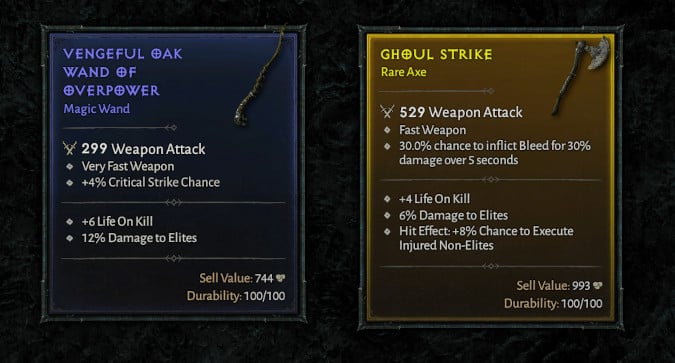 What type of weapon do you have?

It may seem fairly elemental to say that an axe isn’t a sword, and that neither is a mace, and that using a wand should feel different than using a staff. But a lot of the difference between these kinds of weapons can be lost in an RPG — when it’s all abstracted into numbers on a screen and the cosmetic difference, it can be easy to just swing whatever does the most damage. Diablo 4 is baking specific differences into its weapon types, in a way that will hopefully accentuate how you’re choosing to play the game.

One example of how this will all work is the Barbarian’s Arsenal feature, where the Barbarian will literally switch weapons for a specific ability, or to perform a specific task. The example used is the Barbarian’s Upheaval ability, which uses the character’s giant mace to blast his enemies with a small explosion of rocks and dirt torn up from the ground with that gigantic mace swing.

Weapon speed isn’t a surprise, but it’s interesting to see how fast weapons will work to allow for more precise battlefield positioning vs. the biggest damage of bigger, slower weapons, especially when its a caster choosing between a wand and a staff, and there will be dedicated characteristics to each weapon type that make that type of weapon attractive for a specific role, such as a shield’s block value. And, although it’s not a big deal in the grand scheme of things, I’m excited that the weapon icons are just going to be renders of the actual weapon in question — so when looking at your weapon’s stats to decide if you want to use it, you’ll see an icon that represents what the weapon will look like when you choose it. Hey, after the past decade of transmog options in games, it’s fine to admit appearance matters. 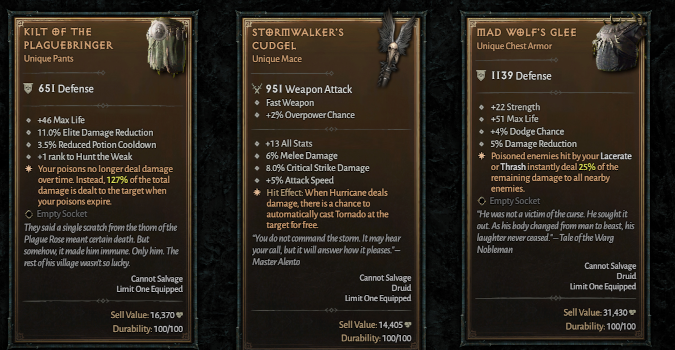 Item quality in Diablo has been such a part of the game over the years that it’s even affected other game Blizzard has done. If you’re chasing Epics in World of Warcraft or trying to get a Legendary put together in Shadowlands, that’s a legacy from when World of Warcraft was in development and Diablo 2 was a big influence on its systems, as the biggest example of RPG itemization Blizzard had ever worked on up to that point. With the update, we’re getting a sense of how that’s going to work in the upcoming game, and if you’ve ever played a Diablo game I don’t think it’ll be a shock to you.

Item quality is basic to how Diablo handles itemization and upgrades, and at its most basic it’s a simple color game. Blue items are magic and better than grey or white ones, yellow items are rare and better than blue, and Legendaries are orange and better than either, at least at the same level — a blue staff that drops from higher level mobs might end up being a DPS upgrade over your yellow staff. In Diablo 4, the way that manifests is through item affixes. Blue items will have the same affixes as other items and can therefore have a really powerful affix, just the one your Sorceress is looking for. Rare items will have up to five affixes, each randomly chosen. And Legendary items will have four regular affixes and one special Legendary affix, and all of these will be randomly determined — including the Legendary affix.

Uniques are replacing the original Diablo 4 design for Mythic items, and they’re basically Legendary items with fixed affixes. While it can be fun to find a Legendary item with random affixes, sometimes you want a dependable item that you can build your specialization around, and that’s where Uniques are, well, unique — they allow you to know up front exactly what they’re going to do and to make plans accordingly. The goal here is to allow Rare items to be more competitive with Legendary items while still leaving special Legendary powers as the province of the latter, and to give Legendaries a chance to be retained rather than that Unique drop if you’re not trying to build a character around that item’s affixes.

It all seems intriguing to me, and I’m thinking about how it’ll affect my character choices going into Diablo 4, which is a bit of a departure — rather than just going for the color of an item, you’ll actually want to look at the affixes, which can also include sockets for you to further customize your gear. That’s right, sockets are back in Diablo 4.

Man this game can’t come out fast enough for me, but I’m excited to see every tantalizing detail.