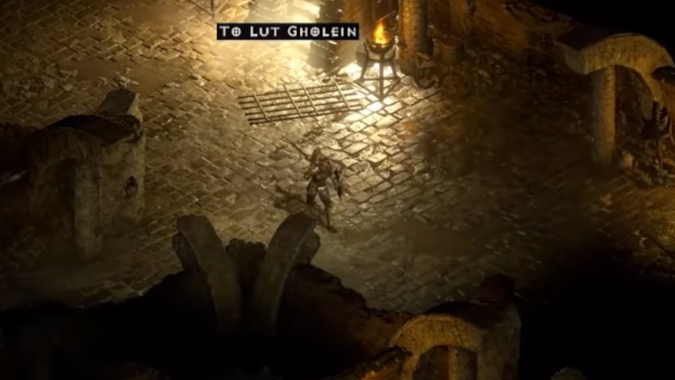 Diablo 2 Resurrected is upon us. When I watched the Diablo 2 Resurrected Deep Dive on the BlizzConline streams, I was captured by the discussion of the game’s new look. Essentially this remaster takes the original 2D style of Diablo 2 and updates it into a 3D game with fully rendered models that drop in the world even for items and scenery. One change that’s pretty big is that we’ll be physically seeing the models you get when you look at an item in your inventory — models look the same when it’s laying on the ground, in your bags, or on your character when you’re using it.

In their interview, Andre Abrahamian, Chris Amaral, and Rob Gallerani discussed the game’s remastering process and how they stuck with a 70/30 philosophy, holding onto at least 70% of the game’s old look, colors, etc. while improving the game’s visual look with a vastly updated 3D modeling system for everything from drops to the world. They want the game to look like Diablo 2 but updated — not a whole new game. The goal was to preserve what was the iconic appearance of the game overall, but improving so that things that were technically always there in the world will show up.

The game will still operate on the same gameplay speeds as before because the original game is essentially running behind the scenes underneath the current art and models. The original Diablo 2 ran at 25 FPS and that affected the way various gameplay elements played out, and that speed of gameplay is still preserved even though the game is now running on modern machines and consoles. They made the point that the original Diablo 2 is there, underneath the newer, shinier, versions of models and other visual assets like those pretty new onions that were in the game originally even if you didn’t see them because they were blobs of pixels.

Diablo 2 Resurrected will be entering public testing soon, although I think the site’s being crushed at this writing you should be able to go sign up for the test at Diablo2.com. Then we’ll all get to look at that updated 3D art for one of the most beloved ARPGs in history.

Blizzard Watch is made possible by people like you.
Please consider supporting our Patreon!
Filed Under: Diablo 2, Diablo 2 Resurrected
Advertisement