Diablo 4 lets the haters hate in the Fields of Hatred, open-world PVP zones 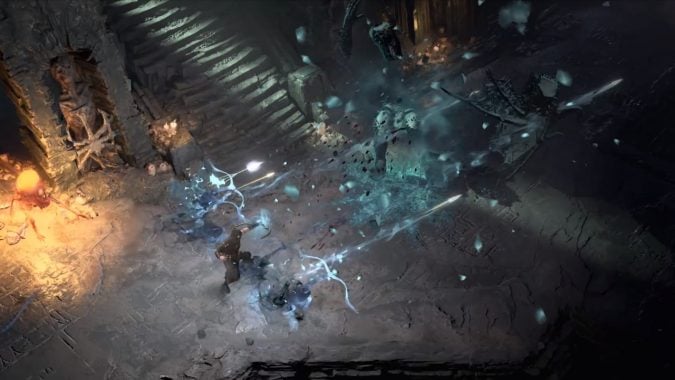 We’ve been eagerly awaiting more information about PVP in Diablo 4 ever since it was announced at last year’s BlizzCon. Historically, the Diablo franchise has had a fraught relationship with PVP, but Diablo 4 seeks to change all that with an open-world PVP system that isn’t always fair… but is always fun.

“One early emphasis of PVP in Diablo 4 was to erase the idea that PVP needs to be fair,” explains Lead Systems Designer Joe Piepiora. “That can be a scary thing to say.”

But in an open world environment, there’s no way guarantee that every battle will be equitable. Players could be in combat with a monster or another player when they’re attacked. Players might not have any of their cooldowns available. Not every fight can be fair.

“We think the ebb and flow of that kind of PVP combat actually feels great in Diablo 4 right now,” says Piepiora. “Sometimes you’ll be at a disadvantage when a fight begins. You might have to escape. You might pull out all the stops and manage to take out your opponent. You might get taken out. Those peaks and valleys are part of the open world PVP experience that we want to embrace.”

To the developers, every class shouldn’t necessarily have an equal chance to win in any given situation. Instead, PVP in Diablo 4 aims to keep you guessing. Different circumstances may give an advantage to different classes: for example, a Barbarian can leap off a cliff above you and attack before you realize they’re there. But without that cliff, you might see them coming and make a hasty retreat to avoid the encounter. “We want to make sure that there are lots of different circumstances in the environment that allow players to feel like they can succeed in some situations and fail in others,” says Piepiora. “And always feel like there’s an opportunity when they come back to play.”

All PVP will occur in specific areas called Fields of Hatred, where “the hatred of Mephisto has been bubbling up from Hell.” When you venture into the these zones, you can choose to flag yourself as Hostile or you can remain a noncombatant. Until you choose to become Hostile, other players can’t attack you, so you can safely explore the area and farm for Shards of Hatred, the game’s PVP-specific currency.

You earn Shards by defeating monsters, completing events, opening chests, and of course slaughtering other players. These Shards let you purchase costumes, mounts, gear, trophies, and other rewards. But PVE players shouldn’t feel pressured to PVP to advance — the rewards aren’t better than the rewards you can get from PVE, just different. They’re mostly cosmetic items that let you show off your PVP accomplishments, and players who excel at PVP will really stand out when you encounter them.

And you will need some impressive PVP skills under your belt to get that gear. Even though PVE players can freely venture into the Fields of Hatred, Shards won’t do them much good if they aren’t willing to risk a PVP brawl at some point — because before you can spend Shards of Hatred, they need to be purified in a special ritual.

Sounds simple, right? Well, here’s the catch: the game announces to nearby players that someone is trying to begin a purification ritual and flags you as Hostile. If other players kill you before you complete the ritual, they get to keep all those precious Shards for themselves. Once a Shard is purified, it can no longer be looted from a player’s corpse, but before that point, dying means losing all of your Shards. You’ll have to play strategically if you want to get away safely — Blizzard suggests teaming up with friends when you want to purify those Shards, because everyone around will be gunning for you.

You could conceivably purify your Shards and collect cosmetics without ever engaging in PVP. Careful PVE players who really want PVP rewards might pick a quiet time in the Fields of Hatred to turn in their their Shards and make a run for safety, but there will always be risk involved. Once you’re Hostile, you can’t just shift back to non-Hostile: you’ll have to return to town to remove your Hostile flag. Even if you survive the purification ritual, getting back to town could be a treacherous journey.

In the end, Fields of Hatred won’t be a very productive place for PVE players to hang… unless they’re willing to flag themselves for PVP at some point. That’s as it should be. If you can farm Shards all day without ever getting scratched by another player, it isn’t much of a PVP area at all.

If you manage to put down enough players during your adventures in the Fields of Hatred, you become what’s called a Vessel of Hatred. This status lets other players see your position on the map as a hostile threat — and get a Shard bonus for murdering you. As a Vessel, you’ll have a set amount of time that you need to survive. If you manage to stay alive without fleeing the Field, you’ll get a “big bonus” at the end.

PVP certainly isn’t everyone’s cup of tea. But for those who want it, Diablo 4 seems like it will offer an exciting and robust PVP experience.

Blizzard Watch is made possible by people like you.
Please consider supporting our Patreon!
Filed Under: Blizzconline, Diablo 4, Diablo 4 Pep, Fields Of Hatred, Pvp, Shards Of Hatred
Advertisement