Just who is the Archon? What we know about Kyrestia the Firstborne, the beacon in the darkness

The leaders of the Shadowlands are the Eternal Ones, also referred to as the Pantheon of Death — and the patch 9.1 trailer tells us that the Jailer intends to take them all on. But Kyrestia the Firstborne — more commonly known as the Archon of the Kyrians — was the first one attacked.

We still know little of the Eternal Ones, so now that we’ve seen the cinematic (and learned the Archon’s fate), it’s time to ask: Who is the Archon, this leader of the Kyrians? And what’s her importance to the Shadowlands and the process of death? Is she a force for good… or are the Forsworn right and she’s misleading us all? 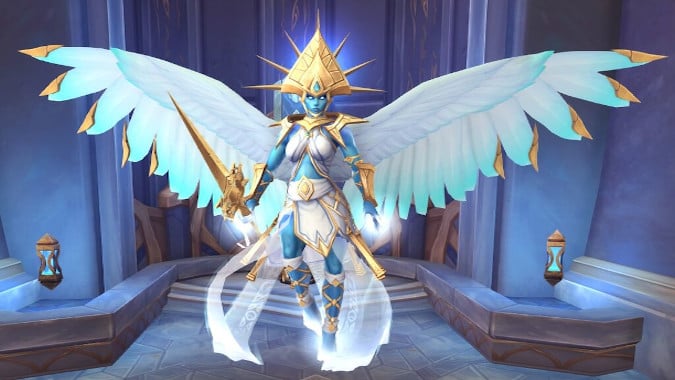 The Archon is Bastion

The cinematic for patch 9.1 left us with one big question: did the Archon die? The developers quickly confirmed that no, she’s alive. That’s probably for the best, since a bug in the Spires of Ascension dungeon has a unique death scene for Kyrestia, where she says:

As the Archon perishes, all life in the zone is wiped out!

The Archon and Bastion are intertwined, and Kyrestia has ruled over the realm since the very beginning. The Shadowlands has existed since mortal life has existed, and in Bastion’s library a scroll called The Archon tells us Kyrestia has always been there:

Kyrestia, the Firstborne, Archon of Bastion, has presided over this realm since the Shadowlands came into being.

Since mortal life has existed in the universe, the Archon has existed — and, it seems, is connected to all life in Bastion. When a player chooses the Kyrian Covenant and is being given a tour of their base of operations in Elysian Hold, Polemarch Adrestes tells them that it was built by the Archon. She is the architect and construction crew. More than likely, this implies that these zones — or at least the structures within — were formed by the will of the Covenant leader. 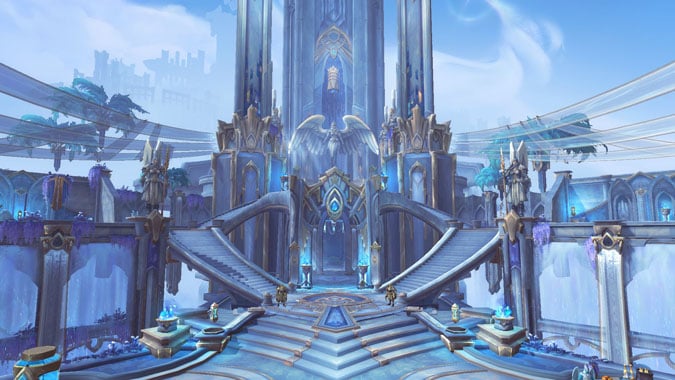 Kyrians serve as the ferrymen of souls

Kyrestia runs a well-oiled machine. A machine of death.

The Kyrians and the Archon play a major role in the Shadowlands by carrying all mortal souls into the afterlife. But more than just being the ferrymen, the Kyrian can decide when it’s time for a mortal soul to cross over. Has your character ever died on Azeroth, Outlands, or Draenor? Then released, and instead winding up the Shadowlands appeared at a Spirit Healer who allowed you to run back to your corpse and remain in the mortal realm? That Spirit Healer was an Ascended Kyrian that the Archon appointed as a Watcher, deciding whether it’s time for souls to go to their next life.

When it’s the final time for your character to shuffle off their mortal coil and head into the Shadowlands, the Watcher will call another Ascended Kyrian to carry them into the Shadowlands. Hopefully by then the Arbiter will be back in operation and they won’t just be dropped off directly into the Maw.

The dead coming to the Shadowlands are what provide the realms with the Anima that fuels the afterlife. And it looks like all souls are brought to the Shadowlands based on a process set up by the Archon, from the very inception of death. She has the process running so smoothly that it doesn’t even stop when every soul ferried in is immediately sent to the Maw.

That’s something she should well be aware of, especially in the wake of the Anima drought, but the business of Bastion continues on as usual. 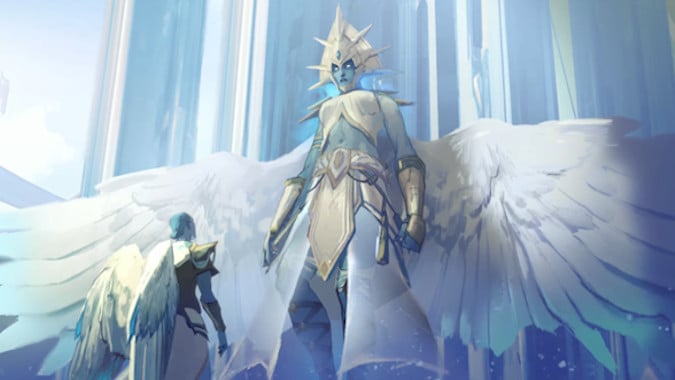 To fill their role, Kyrians must leave everything else behind

To keep this machine of death working as well as it does, the Kyrian must be dedicated on their tasks. They cannot be weighed down by the life they lived, and through their training, they give up the memories of their former lives. These memories are not gone, per se: they’re stored in the Temple of Wisdom, where they can be viewed by anyone with access. Kyrestia explains that this is necessary for Kyrians to serve their purpose:

We sacrifice because we must. Mortal burdens would only impede our sacred duty.

But not all aspirants want to give up their memories, give up who they are. We see this with Uther, but it isn’t just him. Those who cannot let go of the past or fail other Kyrian rites of passage are sent to the Temple of Loyalty. Here, they are meant to reflect and hopefully to overcome any obstacle standing in the way of their progress towards ascension. It was rare for them to become so stuck on these thoughts they never moved on, but if they couldn’t, they were banished to the outskirts of Bastion to wander for eternity. These lost souls were the first Forsworn.

The Archon — accidentally, perhaps — created her own enemies. Those who disagreed with her, questioned the Kyrian’s path, or simply couldn’t let go of their past life were sent to the Temple of Loyalty or into exile, where they eventually grew into a powerful force. Even Devos — the Paragon of Loyalty who eventually turned into the Paragon of Doubt — became one of the Foresworn when the Archon ignored her concerns about Uther and the Jailer. And the Foresworn’s discontent offered the perfect opportunity for the Jailer, who could offer them power without sacrificing their mortal lives. Devos’ right hand Lysonia accepted this offer and led the fight against the Kyrian:

Too long have we struggled under the tyranny of erasure. Over and over again we are told that we must give all we are, to serve a greater purpose. The Forsworn would have you keep your memories, your attachments! We are here to liberate you. To offer another path. Join us, and be embraced! Resist, and you will be swept aside. A new order has come. We must all decide where we stand.

Civil war had come to Bastion. 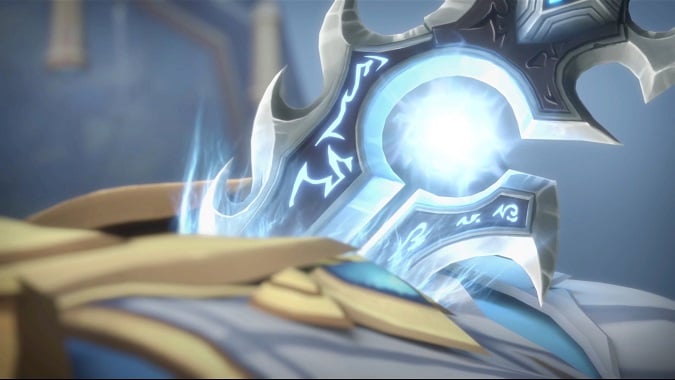 Is the Archon a bad person? Not exactly.

Kyrestia asks the Kyrians to give up everything and in exchange they give her an eternity of service. And if souls find themselves in Bastion but are unable to pass the tests and become Ascended, they aren’t allowed to leave to find an eternity more suitable for them — instead they’re banished to the outskirts of the zone as Forsworn.

But death does not necessarily lend itself to morality. The Archon has a job to do, and she does it as well as she knows how. To bring souls from everywhere in the universe into the Shadowlands — without pause, without rest — requires dedication. The Kyrian cannot waver in their duties. They cannot doubt.

The Archon put together a method that worked for eons — and might have continued to work were it not for the stress caused by the Anima drought and the questions raised by Uther’s arrival.

It’s not that the Archon is hurting Kyrians maliciously, but harm is being done all the same. When she learns that Devos has betrayed the Kyrians, she isn’t angry but mournful — she’s lost a friend, or at least an ally. And when confronted by the Foresworn and their Mawsworn brethren, she admits he path she designed may have flaws:

The Jailer’s schemes have torn a schism in the ranks of the kyrian. One that must be healed. Long have we believed that our mortal lives are burdens to be shed in the name of service. And yet, the deeds of mortals are what won the day.

Kyrestia, the Firstborne, leader of the Kyrians, and directly tied to all life in Bastion, does not seem like a bad person. She’s more like how the Light is portrayed: as a force of purpose rather than a force of morality. She has a single goal — to bring souls to the Shadowlands — and has conceived a single method to carry out this goal. With her purpose set, she appears to be blind to other possibilities. Her role — the Kyrian’s role — leaves no room for betrayal, no room to recognize the cruel fate she’s sentenced the Foresworn to.

This might be why the Jailer attacked her first — she was unlikely to see through an attack from one such as Anduin, who seems so likely to wind up a Kyrian after death. And while we know she survived the encounter, the Archon’s future — and the Kyrian’s future — is still up in the air. Can she embrace the change the Kyrian need to unite and survive? Or, after an eternity as Archon, is Kyrestia too set in her ways to change?

Blizzard Watch is made possible by people like you.
Please consider supporting our Patreon!
Filed Under: Anduin, Devos, Eternal Ones, Kyrian, Lysonia, Pantheon Of Death, Shadowlands, The Archon, The Jailer
Advertisement